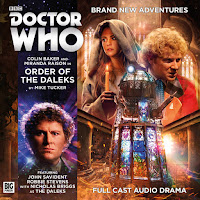 What's it about: In the Galactic Census, idyllic Strellin is recorded as a Grade Three planet – its inhabitants possessing neither advanced technology, nor knowledge of other worlds. Accordingly, Strellin is protected: landings by off-worlders are strictly prohibited. Unless, of course, those off-worlders are officials of the Galactic Census itself, come to investigate the origin of a mysterious sub-space signal – a signal no native of Strellin should be able to send... Breaking all local by-laws, the time-travelling Doctor and his companion L/Wren Mrs Constance Clarke (AWOL) have only just landed on Strellin, too. But they and the Census officials aren't the only off-worlders to have come here. Inside a nearby monastery, the monks of the reclusive Brotherhood of the Black Petal are guarding a strange and terrible secret. Something that might bring disaster not just to Strellin, but to every civilised world in the galaxy!

Softer Six: 'Until someone has loved an animal a part of ones soul remains unawakened...' quotes the sixth Doctor in typical theatrical style. I've said it a million times before but this character is simply made for audio. He bursts forth from the TARDIS ready for the next adventure with such vibrancy and gusto and I cannot help but get swept up in his wake. The planet Strellin is well known in the galaxy for its peace and tranquillity - you have to wonder why the Doctor chooses to take his companions to these universal paradise planets given his adventures usually devolve into a mayhem and murder. Does he have a desire to rid the universe of beauty spots? Something of an expert when it comes to visiting pre-Space Age civilisations, apparently. Despite the fact that it pours out of his very pores, he cries out against any suggestion that he is arrogant. His bark is worse than his bite and it's important to remember that because sometimes his bark is terrifying. In the face of Daleks with the equivalent of bayonets the Doctor is more facetious than ever by playing up to their impotence. Remember when the New Adventures had the Doctor taking a dose of mind altering drugs to save the day and fandom went up in arms about it? It says something about how the series as a whole has shifted that the Doctor does exactly that in this story and nobody will bat an eyelid. After destroying worlds, falling in love and killing people...what's a little hallucinogenic drug between friends? The Doctor almost manages to wrestle the Abbot's mind back from the Black Dalek by sheet force of will.

Constant Companion: She's a beautiful woman and even in her conservative wartime clothing might prove a little much for the Monks. The only reason she is prepared to wrap up in a cloak is because it is a shade autumnal (although it provides another striking image on the cover). I liked that fact that Constance finds out about the Daleks before the Doctor, although it has to be said she makes very little observation about them aside from not understanding at all what they are. Constance will act on her own volition rather than waiting for the Doctor's permission. I wanted to criticise the story for failing to do anything interesting with Constance out of the 'generic companion' mould until she took it upon herself to stab a Dalek mutant with a screwdriver. That's definitely novel. I like how she and the Doctor are treated as equals, she doesn't suffer his pomposity and he respect her. There's no degree of him talking down to her in the way he can with his younger companions (Peri, Flip). Travelling with the Doctor is starting to make Constance feel invincible, she's dashing into situations without evaluating the dangers. The Doctor has come to rely on Mrs Clarke, one of his constant companions.

Standout Performance: Whoever was responsible for bringing Colin Baker and John Savident together deserves a medal. If you've seen the entire run of Blake's 7 you'll know that these two actors are responsible for two of the most outrageously over the top and amusing guest characters that the show ever produced. Within the confines of a Doctor Who story they are both reined in a little but it is still a battle to see who can steal each scene. Their chemistry is a joy and the two characters butt heads with spectacularly, proving you don't have to get on to work together successfully. I haven't seen Colin Baker have to fight for scene space this badly since The One Doctor.

Sparkling Dialogue: 'What are they going to do...prod me to death?'
'Scuttle my shuttle?'
'Murder! Committed by men of peace!'

Great Ideas: The Brotherhood of the Black Petal are renowned for their work with stained glass. Trust Big Finish to dare to explore such a beautiful artistic field when they deal with a purely aural medium. It does give them the opportunity to produce the most striking cover in many, many a year though. It's magnificent. But to have a character who has taken a vow of silence in a setting that is known for it's magnificent beauty does rather feel as though it is pointing out the fact that we are lacking images. A crashed spaceship with aliens working night and day to try and escape from Stellin...who could they possibly be? The Daleks have no qualms about introducing higher technology to a primitive civilisation if it means advancing their plans. Morality was hardly a strong point of there's. There was never any distress, the signal was sent out merely to lure some poor innocent space traveller onto the rocks so they can salvage their craft. The Monk's donate what blood they can but they need fresh victims... to feed Dalek mutants that are being kept alive inside animal carcasses. What a repulsive idea. Daleks without guns is not an original idea but it is still an interesting one, forced into using their wits. The Daleks that have crash landed on Strellin are part of a battle fleet involved in the invasion of the planet Kantra. An elite squad and part of the Emperor's Guard. Smart enough to escape a crash on a primitive planet without technology and still manage salvage what help they can from a society without technology. If your only help is a group of Monks, have them construct (beautiful) stained glass cases for you. Daleks who are able to project their conscience into the minds of people? That would make for a formidably destructive army. Tucker enjoys putting some grisly images out there, knowing full well that we can't see them. A Dalek mutant screaming and squelching his way up a saucer exhaust pipe is really nasty. The Monks consume the extract of the Dream flower which allows them to become one with nature - a notorious hallucinogenic substance. Before the Daleks came they lived in perfect harmony with nature but now they have spoilt that. By using their blood to grow stronger they have become one with the perfect mind, perverting it. Trust the Daleks to take hold of something pure like a religious order and turn them to hate and murder.

Isn't it Odd: Certain writers you expect big things from, others you are a little kinder to when it comes to their work. Tucker has never been a favourite of mine because I am more of a fan of substantial Doctor Who stories. He favours traditional, simple narratives, concentrating on the adventure rather than providing truly meaty characterisation or thematic depth. That's not necessarily criticism because his stories are usually very well paced, exciting and full of big, bold imagery. You cannot say he first episode of Order of the Daleks is packed with substance, it's a relatively simple set up that leads to a humdinger of a cliffhanger. Compare it to, say, the first episode of Jubilee or The Curse of Davros (other Colin Baker Dalek stories) and this is pretty shallow stuff, but it's rather engaging because of it. In a time of overly complicated stories are the works of Mike Tucker and Justin Richards (lets call them the Kings of Trad) shining through because they return to a tried and tested formula of old? The first episode is a whopping 33 minutes long but it skips by amiably enough.

Standout Scene: I really enjoyed the end of episode two because it not only proves that the Doctor's hunch was erroneous but it also does something novel with the Daleks, giving an actor the chance to play the role without any modulation. Robbie Stevens is excellent and really sells the moment. I had goosepimples.

Result: Often there is something rewarding about being patient. It takes Order of the Daleks some time to get to he good stuff but it is taking it's time for a reason, lulling you into a false sense of security before hitting you with some really unpleasant ideas. Power of the Daleks couldn't have been brought out at a more fortuitous time because that also sees the Daleks trapped and powerless, using their wits and manipulation techniques to exploit the local population into making them strong again. I love it when they are forced to use their intelligence rather than simply blasting away, it makes them a force to be reckoned with intellectually rather than just another faceless monster. Tucker has introduced enough elements to his story to keep it ticking over for its four episodes; the stained glass Daleks, the mental exercise in Dalek survival, the mutants being incubated in animal carcasses, the religious revolution. You're not going to be blown away by anything truly original because the Daleks have been explored to death across several mediums but by taking a visual approach on audio Tucker has at least tried something novel. And the ideas this story contains are good ones, enjoyably presented. Just as the striking cover suggests, this is a mix of a medieval setting with science fiction elements which gives it a hybrid genre that is hard to pinpoint. I rather liked that. Order of the Daleks isn't going to be anybody's favourite story but it skips along with some nasty concepts, features some sterling performances and lovely direction. For a range that is being criticised for losing its way this an rock solid Doctor Who adventure with the added bonus of featuring Colin Baker. He skips from he TARDIS with such gusto and drags me through the adventure in his wake. I recognise that I'm biased but I will automatically give this story an extra mark for his engaging presence: 8/10
Posted by Doc Oho at 00:44 No comments: