Sword of Orion written and directed by Nick Briggs 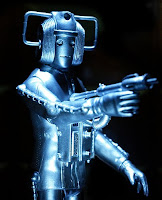 What’s it about? The human race is locked in deadly combat with the 'Android Hordes' in the Orion System. Light years from the front line, the Doctor and Charley arrive to sample the dubious delights of a galactic backwater, little suspecting that the consequences of the Orion War might reach them there. But High Command's lust for victory knows no bounds. Trapped aboard a mysterious derelict star destroyer, the Doctor and Charley find themselves facing summary execution. But this is only the beginning of their troubles. The real danger has yet to awaken. Until, somewhere in the dark recesses of the Garazone System, the Cybermen receive the signal for reactivation...

Breathless Romantic: After making such a good impression in Storm Warning I took absolutely nothing away from his characterisation in this story. It was so vague and he was given so little chance to show off it could have been any Doctor in this story. Thank goodness this wasn’t the opening story or we would still be feeling the effects as Colin did with The Twin Dilemma. He is very much subdued in this story, aware of the darker side of humanity. There will come a time when the 8th Doctor will be this humourless for a couple of seasons of stories so lets just be glad this is only a minor aberration for the time being.

Edwardian Adventuress: Again she hardly registers which might a cause for celebration for some people but I found this quieter Charley far less interesting than the excitable one from the previous story. I did like the scene at the beginning where she was bartering with an alien and gives him a sock in the mouth for getting too cheeky. She is disgusted by the thought of interbreeding, a sign of the age that she comes from. Charley is quite resourceful and brave and tries to stop victims’ wounds from bleeding but you would think that she would be far more culture shocked than she is. She likes the fact that there is a woman in charge. 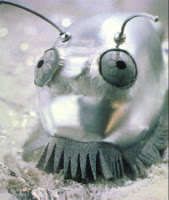 Great Ideas: One of the biggest problems with Sword of Orion is that its ideas are old. If I were to pitch this story to produce John Nathan-Turner – a derelict spaceship is discovered and a salvage crew board to discover it is a cyber conversion ship – he would probably lap it up. This is a traditional Doctor Who story in all the worst ways because it doesn’t try to be anything beyond that. The Garazone bazaar is a lovely idea, humanity in all its grim and grimy glory where smuggling is rife – an environment inside a structure floating between the stars. Shame we only spend ten minutes there. An abandoned derelict star destroyer is the perfect location for an Eric Saward massacre tale. I do like the idea of a factory ship sent out to find more troops for the Cyber cause, but it’s a shame that we don’t see much of that happening either. Beyond that the story pretty much plays out exactly as you would imagine, they board the ship, the Cybermen wake up, the guest cast are murdered and they leave. Nothing new to hear here.

Standout Performance: Bruce Montague who manages to salvage something from the thankless character of Grash. He is exactly the sort of gravelly voiced nutter you would expect to find in this sort of story but he manages to push the character to some extremes at times – especially during his conversion scene where he rants and screams until his last breath.

Sparkling Dialogue: ‘There’s certainly something about our Deeva.’
‘But that’s inhuman!’ ‘We learn from our creators.’

Audio Landscape: Now here at least I can lavish some praise on this story. Even if his scripting leaves something to be desired with this story Briggs knows how to make everything sound authentic. The opening scenes feature the Doctor’s distant voice, Ramsey’s anguished howls, space walking, suit intercoms, laser blasts and mechanical growls. The Garazone bazaar is brought to life with all manner of sounds but the thing that makes it unique is that catchy jingle that keeps playing. Dogs bark, horses neigh and alien voices gurgle. An antigravity pod shoots past and drops the Doctor and Charley to the floor (not an easy thing to realise on audio). You have some glorious huffing, puffing and hissing machinery taking the TARDIS away. Wind runs through the star destroyer suggesting desolate emptiness. Lights fuzz with electricity before extinguishing. The Cybermen breaking free of their hibernation sounds rather like an insect breaking from a chrysalis, a tearing of soft metal and hydraulic fluid. 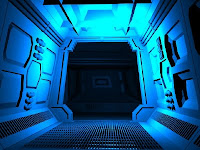 Musical Cues: I have read reviews that state you should not let the overpowering music convince you that something important is happening which I thought was a bit harsh until I listened to the play and thought the music was one of the best things about it! There is a metallic heartbeat running through this story, a general battering of drums and piano to create some atmosphere. There is a very nice three note piece when they realise Deeva is an android. To be fair to Briggs the music very often got me more excited than the story.

Isn’t that Odd: That Nicholas Briggs chose this whimpering narrative of a story to be the template of his Cybermen series. Stick to the Daleks, man, they are your forte. Briggs is clearly a good writer (Patient Zero, Blue Forgotten Planet) but he needs to stop relying on old ideas that were popular ten years ago and focus on creating original stories of his own. Embrace the Darkness in the next season shows how he improves with each story.
As good as Bruce Montague was I cheered when Grash finally died because he was so unlikable – was that supposed to be the desired effect? With lines like, ‘I thought we could at least pin desertion of duty on that stuck up cow!’ its a wonder these character make any impact at all!
Jansen is so obviously either a Cyber-agent or an android that when she was revealed and has the audacity to say ‘Had you fooled, didn’t I?’ I laughed until my sides hurt.

The use of the Cybermen bothers me…it feels as though unless McGann faced at least one of the biggies in his first season he wasn’t really going to be accepted as the Doctor. One of my biggest gripes about the Cybermen is often that they were just used because…well why not (my favourite example is Kevin Clarke of Silver Nemesis infamy saying ‘Well it is the silver anniversary and they are silver!’).
I’m not sure that this story is anywhere near strong enough to justify remaking it under the Big Finish banner and the inclusion of the Cybermen once again feels gratuitous. The story says nothing about them, they are not developed in any way…they are just there to be menacing and gruesome which is a role that a handful of different and more interesting aliens could have done better. The Cyberleaders voice is quite good, it sounds authentically 80’s but the lieutenant sounds as camp as Christmas…which I guess is also bona fide (Attack of the Cybermen featured some of the gayest Cybermen ever).

Result: Anyone who has read the rest of this review must have come to the right conclusion by now…I absolutely loved this one! Just kidding! Easily the most painful story to endure to this point and probably for a long time to come, this would have made a particularly soulless four parter on the telly. It is all atmosphere and no intelligence, a terribly dull linear storyline that lacks incident, characters with any personality or real drama. This is my reaction two days after listening to the story…be thankful I didn’t write this up afterwards because my language would be a lot more colourful. What bothers me is that Big Finish and Nick Briggs can clearly do a lot better than this and recycling traditional turds like this story is unacceptable when the same production company and writer offered us The Mutant Phase just two stories earlier. It is a huge black mark on the 8th Doctor line as well which began so promisingly with Storm Warning but ground to a halt with this plodder. It feels like one step forwards and two steps backwards, they had better offer up something pretty damn special to make me forget about this one: 1/10 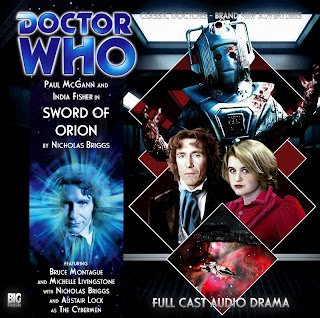 I really enjoyed the first episode. It's a pity that the remaining three episodes are lifeless retreads.