Primeval written by Lance Parkin and directed by Gary Russell 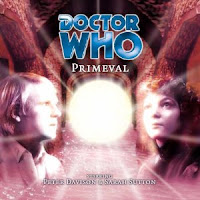 What’s it about? Nyssa will die at dawn, and the Doctor doesn't even know why. To save her life, he must make a desperate journey to the only place in the universe where a cure might exist. When even that fails, the Doctor has a choice -- let Nyssa die, or make a deal with the devil. After all, the road to hell is paved with good intentions...

English Gentleman: Who would give credit to Peter Davison’s assertion that the fifth Doctor and Nyssa would have made for the best combination during his era. Frankly although I do feel that Nyssa is the best companion of the era it sounds like a recipe for bordermsville to me! What a surprise to learn that it could have been just as fun and interesting as he suggests and perhaps even more so! This story opens with the Doctor desperately trying to save Nyssa’s life and reveals a far more parental fifth Doctor than we have seen before and throughout there is a unspoken feeling that they are made for each other, right down to his offer to let her stay on Traken where she would be safe but she would rather explore the universe and be exposed to dangers so long as she is with him. It is a surprisingly believable relationship that maintains its integrity even when they are arguing. Unlike his shaky relationship with Tegan this is one of a (stand in) father and daughter.

He introduces himself as a traveller and agrees that it is ironic that he needs help in medical matters.

He has travelled widely and accepts that evil is relative. The Doctor has no doctorate in theology, he only has his opinion. With two hearts is it more or less likely that he would have a heart attack? He tries to help people but finds it much better to help them help themselves. He accepts his hand in the destruction of Traken in the future and when Kwundaar thanks him for destroying the planet he admits he couldn’t do anything to save it. The mark of a gentleman is that he knows how to Charleston but doesn’t, as the Doctor doesn’t here. He has exiled a few Gods in his time. He reveals himself to be something of a sneaky bastard when he gives Nyssa the wrong code knowing that she wouldn’t be able to resist Kwundaar and steps into the position of the Keeper, the first ever. The has now been marked as a slayer of primeval beings.

Alien Orphan: What better showcase could Nyssa have than to return to primeval Traken? It is great to see how much of her society she still appreciates and how much she has now broken away from their rules and regulations. This script could have been written by Johnny Byrne for the amount of development it gives to Nyssa; the sting of her fathers death still lingering, her flirting with Sabien, her resistance to the scripture of Traken and her choice to continue to travel with the Doctor rather than staying on a planet that will survive in harmony for thousands of years. Because she is known as being quite a clinical character Sarah Sutton is in an ideal position to surprise people and Parkin’s sensual script gives her a chance to really shine.

Great Ideas: The very idea of taking Nyssa back to Traken is pretty heartbreaking considering everything she has lost but finally allows us to deal with those feelings that were ignored on the television. The darkness and exposure to evil is treated like exposure to radiation. The Trakenites suggest that it might be Nyssa to die to prevent her spreading an infection of evil! The cliffhanger to episode one is a great moment – I don’t know about you but I was intrigued at what could make the Doctor scream in pain like that. I like the idea of the spa that is imbued with the healing powers of the Source…can I visit there please? The sun going black is a vivid image, the light from the Source being hidden. Kwundaar was the Trakenite God 250,000 years ago and he taught them the language of science and how to build the Source and with it they no longer needed a God. They kicked him out and twisted his form into Kwundaar where he has vowed to get his revenge ever since. Shela is the first Keeper of Traken – well second, technically the Doctor is the first Keeper.
< Sparkling Lines: ‘Perfection is something we should strive for, not something we should ever attain.’
Evil knows evil.’
‘Let a man sit by your fire and he’s warm for the night. Show him how to build a fire and he’s warm every night.’ ‘Set him on fire and he’ll be warm for the rest of his life!’

‘They replaced faith with reason and they kicked you out!’

Standout Performance: Aside from the regulars it would have to be Stephen Grief’s star turn as Kwundaar. He sits in the shadows plotting and scheming and manages to make the Doctor scream and Nyssa betray her own people. It is a wonderful character and ex-Travis from Blakes’ 7 gives him a gloriously quiet and intimidating quality.

Audio Landscape: Bubbling streams, birdsong, a ticking clock, a heart monitor, the noise of the space port, Kwundaar’s bubbling voice, 80’s blaster sounds, the echoing shouts on the ship, the spaceship descending on Traken and of course that gorgeous sound of the Source. Gary Russell is very faithful to the original Traken story and gives this story a relaxed feel all of its own but I am a little sick of seeing his name on every single story. Giver another director a chance! 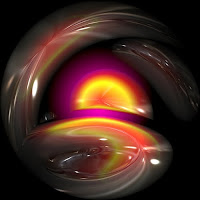 Musical Cues: Soft, seductive and quite sexy. Kwundaar’s tune is especially good as it is quietly menacing just like his voice.

Isn’t that Odd: That this is supposed to be a replica of an 80’s Doctor Who story and there is no tedious TARDIS scenes!

Result: This story isn’t simply a retread of The Keeper of Traken but an exploration of the planets history and a powerful look at superstition, religion and morality. The first two episodes are quiet and uneventful and almost lethargic with their developments but re-introduce Traken with some style. Peter Davison and Sarah Sutton grab hold of this grab and milk for every bit of pathos it is worth and the Doctor and Nyssa leave the story as the ideal Doctor and companion combination. Russell Stone’s music imbues the story with a seductive quality and makes the whole thing easy on the ear and the developments in the last episode, especially the revelation of who Kwundaar is makes the story very polished and rewarding. A nice story in every sense of the word with some lovely dialogue and character touches: 8/10

Buy it from Big Finish here: http://www.bigfinish.com/25-Doctor-Who-Colditz
Posted by Doc Oho at 18:05

is it just me or did the fifth doctor trick nyssa unto wearing a bathing suit for half of this adventure? anyway i enjoy the heck out of this team. this was a good yarn.

Nope. Not just you. Especially as he brought his clothes, and conveniently forgot hers. :)