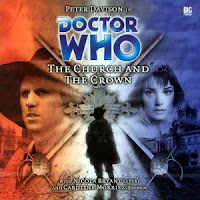 What’s it about: For a start there's a temperamental TARDIS that lands a few thousand years off course in 17th Century Paris. But why shouldn't the Doctor, Peri and their travelling guest Erimem take a look around the city on the morning of King Louis' annual State Ball? As Peri becomes embroiled in a plot to kill Queen Anne and smash the unity of the Church and the Crown, the Doctor finds himself duelling Musketeers on the streets. With Peri missing, Erimem catching King Louis' eye and a Musketeer's sword at your throat, could things get any worse? Probably...

An English Gentleman: Wow, look at what adding one crewmember can do for the chemistry in the TARDIS and imagine how lucky we would have been to have three regulars that got along this well during the Davison era! Seriously, there is a fantastic feel to the scenes between the TARDIS crew in this story, the Doctor is like the aggrieved step dad with Peri and Erimem as his two surly daughters. We are so used to Davison acting up to Janet Fielding’s (beyond irritating) Tegan it is easy to forget what a great guy this Doctor is to be around. Even simple domestic stuff like the doctor not getting along with Erimem’s cat that keeps sitting on the navigational controls of the TARDIS give this team a lovely cosy feel. Bravo for bringing in Erimem and long may this trio continue. What’s also a real treat within The Church and the Crown is how well Davison suits this swashbuckling tale of witty, quick fire dialogue. I always had him pegged as the quietest Doctor but give him some clever repartee and he can duel verbally with the best of them, and with some relish too.

He is the strangest man that Erimem has ever met. The Doctor sometimes wonders if there is anything left to discover at his age but something usually shows up. He’s had a nip and tuck since he last met King Louis so he won’t recognise him. Erimem states that he is the most honourable man she has ever met (and considering how long she has known she must have met some pretty dishonourable blokes in Thebes!) and she introduces him as her royal vizier and chief advisor. Although King Louis thinks he suits the role of jester! He intrigues everybody and can be trusted with your life. He wishes he had listened to Houdini when he is in a scrape. He fights with all the skill of a musketeer and talks the talk too (‘Hasn’t anyone told you…we’re in France!’). 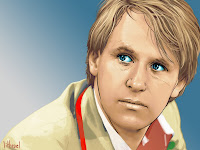 After performing with such talent he is recognised as performing acts in the name of France and becomes an official cardinal guard and musketeer! Even he admits that he has found this adventure fun and tries to teach his fellow musketeers ‘All for one!’ but they don’t think it will ever catch on. Throughout this story we see the Doctor go from forbidding Erimem to stay aboard the TARDIS, planning on taking her to the Braxiatel Collection. But during the course of the story she proves her resourcefulness and prowess and can see how attached Peri is to her already. He invites her to join the TARDIS with a few rules regarding the cat.

American Attitude: When you see how well Peri and Erimem get on I can’t help but wonder if the show would have been in such dire straits had Davison hung around for a couple of seasons with two such cheerful companions. Had stories like The Church and the Crown taken place during season 22 would they really have cancelled the show? Nicola Bryant always gives a committed performance but here she gets to dip her toes into that old cliché of landing somewhere where a character is the spitting image of her. Bryant’s Queen Anne gives her the chance to show off her (very sexy) British accent and to underplay her scenes. Anne is the antithesis of Peri, understated, quietly manipulative and thoughtful. Peri, as ever, is blunderingly wonderful and full of opinions. Seeing Bryant play both really shows what a great actress she is.

Peri thinks she has missed her calling as a stylist. She pokes fun at the Doctor affectionately, a world away from Tegan’s constant biting and moaning. She is described as the most enchanting creature…a feeling she better get used to as she is going to be lusted after by half of the universe before finally being bedded by Brian Blessed! I loved how vicious and verbose she was when she was kidnapped; this is one companion who wont give up without a fight! Somebody comments that Peri has a ridiculous accent…I’m saying nothing! Peri reveals that her plan was to backpack around the world (went a bit further than that, though). Once she has mounted a horse she wishes she had taken those riding lessons. Peri gains a royal title just has Erimem ditches hers. Trusting the Doctor is one of the easiest things Peri has ever done. Sarcasm does not become her apparently! She is more of a leotard and shorts kind of girl (I bet that hurt Bryant to say those words!). The TARDIS is now her home from home.

Dusky Babe: As already reported above introducing Erimem to the already jubilant team of the Doctor and Peri has been a total success bringing a real sense of youth and energy to the TARDIS. Watching the Doctor trying to handle two girls is going to be a whole lot of fun! The TARDIS wants Erimem to hang around and the Doctor suspects that Peri has put the old girl up to bringing them to 17th Century Paris rather than the Braxiatel Collection. It is wonderful to experience simple things like glass windows for the first time. She doesn’t find the attention to her looks at all intimidating as she was used to be watched by her people all the time. She brilliantly improvises her way into the Royal Palace, introducing herself as Princess Erimem of Karnack. 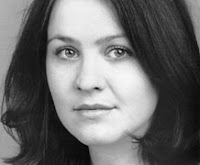 She knows exactly how to play the courtier and claims that confidence and conviction go a long way. She possesses more taste than to give the King a second look and she stands up to both him and the Queen with relish: ‘You bring shame and dishonour to your royal house!’ She is appalled by their childish domestic squabbles. The Doctor has taught her that in life there is always a choice. As the Doctor has seen her command entire armies he happily sends her out to fight. Erimem rouses the French army into uniting to defend the country and take on the English. She proffers her opinion that Buckingham should be executed. She is hailed as her country’s finest Queen. Erimem rocks in this story.

Standout Performance: Nicola Bryant, of course for her stunning dual turn as Peri and Anne. But I also have to put a word in for Andrew McKay who chews up the (non existent) scenery with relish as the spoilt, arrogant, self-pitying King Louis. I simply adored his childish outburst of: ‘There’s a little law in this country! What the King wants, the King gets!’

Great Ideas: Why exactly is the Doctor taking Erimem to the Braxiatel Collection…as a historical curio? Wouldn’t it be great to see the Doctor and Brax cross swords? Queen Anne cannot provide Louis with an heir and he violently accuses her of spreading it about the town. However it is Marie who chases her ambitions through the boudoirs of Paris. Richelieu is described as viper in priest robes and he is planning on ex communicating the King. The Cardinal is arrested which incites religious war! Buckingham is attempting to invade France, he has been smuggling troops and weapons for months. Marie finally plays her hand and holds the King and Queen at gunpoint. It’s all go in this story!

Sparkling Dialogue: The dialogue is quick and witty throughout and I just adored the bitchy banter between the King and Queen: ‘Is nobody concerned that there has been an attempt to kidnap me?’ ‘Be grateful somebody wants to spend some time with you!’ 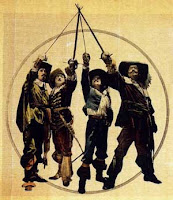 ‘I’m the Doctor!’ ‘Good you can attend to your wounds when I have finished with you!’
‘The universe is full of co-incidence. Its what keeps everything ticking along nicely.’ – You have got to love this rather blaze explanation of why he keeps taking his companions places where they have a double. I rather think it keeps storytelling ticking along nicely.
‘Finally I’ll be able to put my boot up Louis backside!’
‘For the Church and the Crown!’ 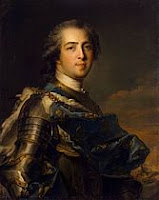 Audio Landscape: Not bad although this is a story that generates its atmosphere from its performances and the dialogue so the underplayed audio scenery is probably for the best. However we are still treated to some authentic 17th Century sounds from swords being drawn and hacking and slashing to scratching quill pens, birds twittering and church bells ringing. Crows scream in the morning air. The Doctor is strapped to a creaking torture device that sounds highly unpleasant. There is an almighty fight in the last episode (‘Do you mind sir that was clean on this morning!’), which is full of gusto and energy and plenty of shouting! There is a smattering of polite applause at the Royal Ball and the orchestra provide some music to sweep your partner across the floor to.

Musical Cues: Russell Stone’s score matches the energy and the joy of the performances. He loves using the piano in his music, which is great because it is my favourite instrument and he underscores scenes of plotting and scheming magnificently.


Result: Extremely likable, The Church and the Crown is a very amusing dabble into historical politics that strikes just the right note of fun. The three episodes build up the discord between the church and the crown, which then climaxes in triumph as they unite and kick the shit out of the English! With Nicola Bryant wowing us with her turn as Queen Anne, a cast that relishes the amusing dialogue and turn out excellent performances and a TARDIS crew that makes you want to dive in there with them this story has just about everything you could ask from a story. It’s a fresh approach to telling a historical because it never takes itself too seriously and as a result you get swept away in the swashbuckling adventure of it all. More like this please: 9/10 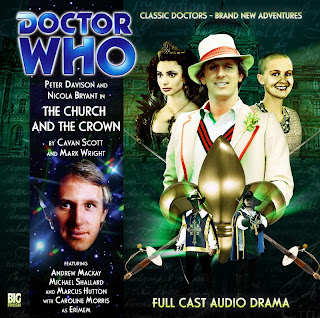 Funny, you gave a much less favorable review on the Doctor Who ratings guide. What changed your mind about the story?

Time, maturity (yeah, right!)...my opinion changed on an awful lot of releases if I'm honest. I'm actually a little embarrassed by some of those DWRG reviews, written so long ago and when I was so earnest! But rather than asking Robert to remove them all I thought it would be amusing people like yourself do find themselves contrasting the reviews there to the ones here.

Hee! What a fun audio. I think the Fifth Doctor is my favorite Big Finish Doctor. Davison has done a good job of suggesting depth to the character without completely revamping the core traits into something unrecognizable (like Colin Baker's lovable Santa Claus or Sylvester's brooding atoner).

Nicola is amazing as always, and it's great how even she is bored spitless with being desired by everyone. She may be a fetish object but at least she's a self-aware one!

A very good one, even better than the first Erimem story. If only the 5th Doctor's TV adventures featured no more strife in the TARDIS than where one of his companions' cats liked to nap.