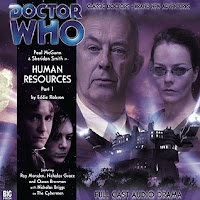 What’s it about: Lucie Miller's been headhunted to join the staff of Hulbert Logistics, a respectable blue-chip firm in Telford. Great prospects, competitive salary - you don't have to be mad to work here! But wasn't she made for better things, like travelling by TARDIS through time and space? The Doctor, meanwhile, has been fired - into a confrontation with the most terrifying of enemies...

Breathless Romantic: Topping a nourishing year for the eighth Doctor, Human Resources features his best characterisation yet. All of his new aggression and bubbling anger comes rushing to the surface and he confronts Time Lords, businessmen and Cybermen alike. Not only that but at this stage Paul McGann and Sheridan Smith are practically finishing off each others sentences, their chemistry is magical and that makes the possibility of their split even more tense. I really like this new ballsy eighth Doctor and it will be interesting to head back into the main range back to the Tiggerish version there after all of these developments.

The Doctor has been trying to bypass the isomorphic controls now Lucie has vanished since he cannot operate the ship without her. The Time Lords have not been very communicative of late. He hardly thinks a Time Ring is the most sophisticated way to travel, it’s a bit too bling for him. I love the Headhunter’s assertion that Lucie has hooked up with a Time Traveller, nobody important. The Doctor tries to bamboozle them with technobabble and finds it very unnerving when they know precisely what they are talking about. He tests Holbart and talks about staging a military coup on Gallifrey. He makes a severe error of judgement lowering the defences to let the insurgents in when he realises it is the Cybermen! I love the scene where the Cyberleader lists all of the times the Doctor has interfered in their plans (The Tenth Planet, The Invasion…). He’s too time consuming and is astonished that his ruse to offer the TARDIS always seems to work. He mocks their creed of ‘We will survive!’ with ‘What for?’ He’s bored of Time Lord petty politics and in fighting and hates having to deal with the fallout of their interference (not for much longer Doc, I promise). He gives the Cybermen a choice and when they refuse he murders them all. The moral of the story is don’t get him angry. 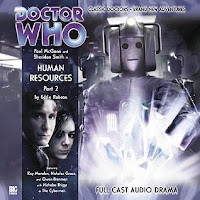 Luscious Lucie: This is her first day at Holbart Logistics and she’s been having to work her notice at her old job. She has an awful line in puns, ‘I’d rather be outsitting (than outstanding) it’s less tiring!’ Lucie loves being thrown in at the deep end. Given that she is starting her new job she’s starting to wonder if her life with the Doctor has all been one long Wizard of Oz moment. She is Sarcasmo, woman of sarcasm; her enemies are struck down by her barbs of steel! Auntie Pat got four grand from the council after an accident with a hedge trimmer! Recently her stride has gotten a lot wider. Is she disappointed when she realises she wasn’t that special after all, just a temp girl? Lucie hasn’t been employed to sabotage Holbart’s operation; she’s doing it for fun. The Headhunted offers to take her away from all of this and Lucie refuses, appalled and thus proves her worth. If it’s not something you can get from an Argos catalogue Lucie needs an explanation. Lucie discovers that she was supposed to be a dictator and the manipulation in her life by the Time Lords – humans can’t be trusted to make their own decisions so they are nudged this way and that and told it is for their own good. She is a made up person, appalled, and screams ‘don’t tell me how to react!’ As her life falls to pieces she holds the Doctor at gunpoint and runs off. She wants to get back at the people who have been messing with her; she wants to take on the Time Lords. Lucie will never have the Doctor telling her what to do. There’s no reason for Lucie to stay with the Doctor but now she chooses to and even the Doctor admits she has been good company.

Sparkling Dialogue: ‘Surely I’m the most arch enemy you have?’
Lucie as the Doctor’s PA: ‘I’ll take four letters and make a word out of them if you’re not careful!’
‘The CIA can kiss my…’
‘To create, to achieve. You don’t. You just oppress other to preserve yourself. What have you learnt for being the oppressed for a change? No humility, no empathy, nothing. I don’t say this lightly but you deserve to be oppressed.’
‘The humans will replace the Cybermen they’ve just destroyed.’
‘That’s the Time Ring? It looks like something from Topshop!’ 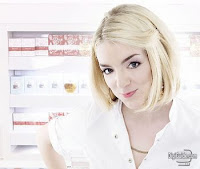 Great Ideas: A Time Lord appears in the TARDIS and tells the Doctor that Lucie has been taken to a temporal black spot. Holbart’s operation is a gigantic war machine posing as a regular office. They are on an alien planet in the middle of a war. The Doctor discovers a dimensional corridor to Head Office. Holbart engineers a clients expansion plan which is fancy talk for staging an invasion, he lays down the groundwork and rids the new tenants of the indigenous population. Holbart brings in people from a non-military background and translates the operation into something they are used to doing and processed not to notice the less ordinary aspects. Lonsis is Holbart’s latest job, he has been working on this world for a year and it is almost complete, like a house halfway through cleaning out the dry rot. He prefers simple jobs, not working for opposing sides in a conflict although for the right price he prides himself on his flexibility! The insurgents on Lonsis turn out to be…Cybermen! It’s a brilliantly hidden twist because who on Earth would have suspected that? After the destruction of Mondas the Cybermen chose Lonsis because of its unimportance. They were depleted and needed to recharge. Holbart offers the Cybermen a passage to Earth to take on their enemies, for a price. The Shinners thought as soon as the Cybermen got their act together they would invade and so called in Holbart to get rid of them first! A quantum crystalliser splinters timelines over a small area and lets different possibilities play out until it gets one that it likes. Some outcomes are positive, others negative and then it fixes the favoured timeline and lets the others die off. If you ally yourself with the Cybermen why wouldn’t you want to be converted? The benefits are manifold! Time Lord technology in a mercenary’s battle machine, the CIA installed it to help wipe out the Cybermen. It’s important that the Time Lords don’t look bad. Lucie is to become a powerful political leader, establishing a right wing movement and sets the human race on a war footing. The Time Lords hid her away with the Doctor so the CIA couldn’t find her. It transpires this was a mistake and it was Karen that was the CIA’s pet project. Time Lord technology, guns you don’t even have to fire, you don’t get your hands dirty, whatever your enemies do, they lose. The Headhunter saves Karen since she has heard some interesting thing about her and she might have an opening for an assistant.

Audio Landscape: Having worked in a phone office for four years the authentic office noises, incoherent babble, phones ringing, a photocopier working brought it all back to me. Lucie’s ring tone is really annoying. Squeaky doors, blasters and a wibbly wobbly dimensional corridor. The Cyber voices are gorgeously retro; it’s the singsong fluctuation of The Tenth Planet Cybermen with the electronic warble of NuWho! The Cyberman on the phone make me die with laughter! Their marching is butch, metallic clanking and their blasters fiercely blaze away. The Crystalliser makes a hum that sounds eerily like the TARDIS from An Unearthly Child. The Cyber deaths are awesome, a screaming breakdown! 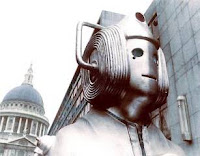 Musical Cues: The underlying piano score really ups the mystery and tension. As soon as the Cybermen show up the music is bombastic, dramatic and attention grabbing. I love the music as the action picks up; an electronic beat with punch the air stings.

Result: Just as the season opened with a longer, more dramatic tale featuring an old enemy so it closes in the same way. Human Resources, like Blood of the Daleks, takes a little while to get going but when it kicks into gear after the stunning revelation about the Cybermen the second episode is non stop thrills and excitement. I love the idea that these are older Cybermen fleeing from the events in The Tenth Planet and its in this story that you realise they are the ultimate victims of Doctor Who. The set up featuring a war machine posing as an office gives this story a unique identity of its own. Just when you are recovering from the revelations about the Cybermen shock information about Lucie and Karen provides a dramatic conclusion. At the head of all this both Paul McGann and Sheridan Smith give extremely confident performances and Lucie has already surpassed Charley as best companion for the eighth Doctor. An engaging thrill ride: 9/10

Thanks for your nice blog! Partnering closely with clients to custom design and implement comprehensive compensation and human resources Strategies that support an organization's culture and objectives.

I'm stuck between two cybermen stories,
This one and Bernice Summerfield The Crystal of Cantus. Which one is better. I love the Cybermen when they are converting lots of people in brutal ways. Are there any other Cybermen Stories you would recommend?

The best thing is, they finally cut straight through the brainwashed/amnesiac plot, instead of spending two hours making a character trying to remind other's about their identity. Love the effectiveness. Also, The Doctor with an office job and a new suit!