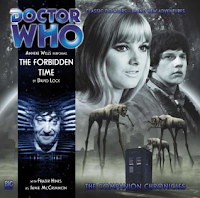 What’s it about: Time Walkers have descended upon the Earth. This alien race, known as The Vist, has claimed an area of time for itself – any species entering into the immediate future will pay the most terrible forfeit. The human race is in a state of panic, but one woman knows the truth. Her name is Polly Wright, and she visited that future many years ago, with the Doctor, Jamie and Ben. She has stepped into the Forbidden Time – and this is her story…

Lovely Lashes: How brave of Polly to get up in front of a room full of press and recount an adventure with the Doctor. I loved the gasps of astonishment as she started talking about Jamie being from the past and how she could spot those who had met the Doctor because they weren’t looking at her as thought she was mad. Polly considers herself well travelled and certainly having travelled further than most people in their lives. Polly calls Ben her sailor and her best friend when she sees that he is alive again.

Who’s the Yahoos: Jamie was like Polly’s younger brother, always getting into trouble and never quite understanding what was going on but fiercely loyal and absolutely fearless. Its interesting to note that when Ben apparently dies Polly is frozen in her tracks screaming (mind you theirs is a special relationship) but Jamie simply accepts the situation. I really liked that because Jamie is a fighter and used to those nearest and dearest to him putting their lives in danger and being killed. Sweetly Jamie admits that he wouldn’t have missed travelling with his friends for anything. Unfortunately Jamie’s first person narration ends when he chucks the voice recorder at one of the Vist which made me chuckle.

Able Seaman: Ben is running a pub now and he and Polly meet up and talk late into the night about the adventures they used to have. Every time they stopped off on Earth Ben always flicked through a current car magazine because he liked to see how the designs changed over the years – so far he has a pretty good grasp over a 200 year time span!

Oh My Giddy Aunt: These days the Doctor is much more likely to trust the people he is travelling with or at least to listen to them. Polly can remember the older, crotchety Doctor who used to brush off her instincts. His ego is also something that has improved because nowadays he admits when he doesn’t know something whereas his former self would bluff through his ignorance. The Doctor can be so alien sometimes, not understanding why Polly has broken down over Ben’s death. Its wonderful that the most undisciplined of Doctors gets to rail against the absurdity of sectioning off areas of time – he will come and go as he pleases and thinks everybody has the right to as well. He tries to bring down all the gravitas of the Time Lords on the Vist but they scoff his attempts to scare them and have never heard of a race who make a claim as grandiose as regimenting the time vortex. When Polly asks the Doctor about his claims he tells her he doesn’t like to talk about his people. He mischievously tricks the Vist into their own destruction but admits he doesn’t like doing that sort of thing but he has certain responsibilities to time and nobody should go around staking claim to sections of it.

Sparkling Dialogue: ‘Well that’s about halfway through the story. I think we should take a break now. Can you be back in five minutes please…’ – is the cliffhanger! Its funny because I was just thinking I could murder a cup of coffee and could do with a five minute break to make one! The audacity of this little wink to the audience really made me chuckle. 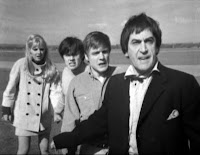 Great Ideas: An area of time that all life forms are to detour, punishment of which is half your lifespan if you infringe upon it. That’s an intriguing hook that I am sure would fascinate the Doctor – what exactly are they keeping secret? It turns out that when you are safe in the vortex you exist at all moments of space and time along with everything else so it is impossible to collide with anything. You shouldn’t build walls across the vortex because it isn’t neighbourly! Time is like a line running in two directions, backwards and forwards but it can be sideways as well. Worlds can have shadows and they have less energy than the originals, not enough for life forms to exist. They can recreate the buildings and geography – everything but the animal life. The TARDIS being connected to the real world and the shadow one at the same time is gorgeous, lending the story a melancholic, decaying quality. An Earth made of dust and shadows, its exciting and evocative (if completely unrepresentative of its era) and once you add the towering, bug eyed Vist stomping through this ashen version of London you have some startling imagery. It’s a place that shatters and crumbles to the touch. When Polly says ‘most of you will know about the existence of alien life by now’ is quite an electrifying line because it could mean because of the Vist telepathic signal or this could be the first companion chronicle to be set in the post Davies era where alien invasions have been exposed internationally. The Vist are disconnected from time, they can walk from one year to another and from the real world to the shadow one. To them time is just like up and down or left and right, they can literally walk through it. For years they have travelled the fields of time watching others drift across them disrupting their subtle energies on which they subsist. They chose to section of areas of time and charge for access, stealing peoples life energy. The creatures have taken control of all time from 2011 to 2019, thinking they can fence of a period of time and stop people trespassing on it like a farmer might with a field! Any living creature passing through that time period has to pay a price to the Vist, a proportion of their life energy. I really like how insane that idea is – these creatures need to feed on life energy and figure a way to make it happen so every person on the planet has to pay. Time and space are a function of each other, they both sprang into being with the Big Bang but before that moment neither existed. By tricking them into going back to the beginning of time to assert their dominance over it they will disappear, as though they have walked off the edge of a cliff. Another potent image – the time wall being weathered away by the vortex, slowly weathering and decaying into nothing.

Musical Cues: This is one of those companion chronicles that has a wall to wall score and it works so well here, ensuring the story’s morose atmosphere never lets up.

Isn’t it Odd: They missed a trick in not suggesting that Polly and Ben ended up together. Of course they did!

Standout Scene: There was no moment that really stood out but the whole story is so focused on its atmosphere and creative ideas there really isn’t a moment where it flags either. Mind you I would have loved to have seen the climax where the travellers return to real time on screen, the picture flickering from the black and white world of the shadow dimension to…gasp!…colour! Wouldn’t that have just have looked amazing on screen.

Result: I find Polly a very absorbing narrator of the companion chronicles for two reasons; one being that given she is one of the characters that has had the majority of their episodes junked there always seems to be a lot learn about the character and her relationship Ben and secondly because Anneke Wills brings a nostalgic, wistful quality to her stories that really drags me in and gives me the kind of feeling I am after listening to this series. The Forbidden Time has a lot of strengths in its favour; a memorable, frightening location, a discomforting new alien race (that I would like to hear more of) which are brought to life with some skill by Lisa Bowerman and an unusual threat to the Earth the likes of which we have never seen before. Add to that the intriguing framing device and Wills and Hines on form and you have a strong audio adventure that pushes its era into a pleasing new direction. Having Jamie record his adventures on the Dictaphone is a really clever idea and it gives the story some a fresh feel, offering moments of unexpected tension as we head literally inside the story that Polly is telling. Kudos for the front cover too, which is evocative and nightmarish: 8/10
Posted by Doc Oho at 11:36