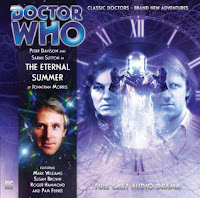 What’s it about: It's been a long, hot summer in Stockbridge. Longer than the villagers can remember. Summer's lease is never-ending – and all thanks to the Lord and Lady of the Manor! One man alone knows that something's wrong: Maxwell Edison, Stockbridge's unofficial ambassador to the Universe. Or 'flying saucer nut', as the locals have it. He'll need help proving it: from the local postmistress Miss Nyssa, perhaps; or the village Doctor, the fellow that's been living at the Green Dragon Inn these last 30 years. They'd better hope that autumn never comes to Stockbridge. When autumn comes, the world is doomed…

An English Gentleman: Like Black Orchid and The Awakening there is something very right about the fifth Doctor visiting a quaint picturesque old English village – he’s so quintessentially English himself he seems to fit Stockbridge like a glove. Whilst some might think of living the highlights of your life a joy the Doctor considers it an abomination. Wonderfully he describes the collective hypnotised villagers ‘stark raving bonkers’ which is a very funny description whoever it is being pointed at. The Doctor comes face to face with himself from the future scarred by the infinite ravages of time, decomposing and rotten, over a million years hence. The decrepit Doctor remembers that his real name wasn’t Doctor but cannot remember what it actually was. Deferring explanations is a habit he really must learn to stop. The Doctor calls the Lord and Lady a remote possibility of a future, a shadow place maintained by the nightmare of what is happening in Stockbridge. The Hyperspatial warp must have splintered off alternative selves and as they were sent into the future another Doctor and Nyssa were summoned into being in the past – that’s the technobabble explanation but there are still a possibility and that’s pretty chilling.

Alien Orphan: Nyssa takes on the surname of Jones which added to the Doctor’s alias makes them Smith and Jones! It has been so long for the older Nyssa that she doesn’t remember Tegan, Adric, the Master of the Cybermen. The time before the village is too distant now. Nyssa is frustrated at being treated like a simpleton and comments that she is more than capable of understanding anything that Lizzie might consider complicated! There is an astonishing sequence as we slip back through Nyssa’s memories of her entire Big Finish run and we realise just how far she has come in the audio adventures.

Village Geek: An expert in all thing abnormal, supernatural and extra terrestrial, basically if it is anything to do with the unknown he thinks he knows everything about it. He’s such a lovable character because everybody else in the village thinks he is a still a crackpot child looking for space monsters. He’s a bit shy and useless around girls and talks too much when it comes to thinking through problems because he is so excited to have the Doctor back in his life. Max is a helpful reminder that it is not just the bad stuff, they get to relive the good moments in their lives too. ‘Who would want to spend their life with an obese, ugly failiure like you?’ – how could you not love a man who is battered down with insults like that by the people who are supposed to love him. Max tries to do the thing where suggests something stupid which enables the clever guy to think up the solution – he’s such a sweetie. Its rather lovely that Lizzie and Max get along so well after everybody else is so mean to him and the offer to join the PIG is clearly the highlight of his life. The way she asks in him (in such a gloriously upper class way) if he wants to go for coffee and a bun together made my heart melt. Coffee and a bun sounds fantastic, indeed. He’s sick of working on the sidelines and leaps back into the danger that waits in Stockbridge to help his friends but gives Lizzie a snog before he goes. The force inside tries to assault him with all the insults and jeers he has had but he knows what happened the night that stars fell on Stockbridge and he refuses to give in to his own insecurities. He’s the one person who was never part of the village, the one person with a mind of his own and the only person who can fight against the power of Veridios. The real hero of the piece. Max died in a bike accident in the real time but pleasingly those events have been wiped out once he saves the day.

Standout Performance: Its not easy to suggest age through your voice alone without the back up of make up to pull the effect off but Peter Davison and Sarah Sutton do an outstanding job as the ravaged versions of the Doctor and Nyssa. With faltering croaky voices and an air of slowness about them they genuinely convince that they have aged 10,000 centuries. The scene where Sutton and Davison cackle orgasmically as feeding from the villagers memories is hauntingly done, they really are nothing like the originals.

Sparkling Dialogue: ‘It reminds me of a town I once visited but that was entirely artificial, a space time trap brought into existence by a madman’ ‘What Milton Keynes?’
‘Its like that film Groundhog Day! I loved that film. I must have seen it a hundred times. Which is a bit ironic come to think about it.’
‘We have our whole lives over again every time that sun comes up. Every joy, every heartbreak, every love, every loss.’
‘What happens to all bubbles in the end? Pop!’
‘The Eternal Summer is ending. Autumn is approaching.’
‘Without the girl Nyssa my existence is founded upon a paradox! I am an edifice built upon shifting sands!’ 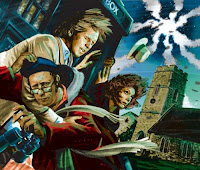 Great Ideas: I love the way the story opens with the Doctor waking up at a Bed and Breakfast in Stockbridge and being told that he has been staying there for as long as the owners can remember, living under the alias of Dr Smith. What on Earth has happened? He tries to piece together the mystery of his situation – Harold and Alice remember the Doctor being there at their wedding anniversary 30 years ago which would make him 50 but nobody questions that he looks about two decades younger than that. Nyssa woke up in the same way with everybody in Stockbridge thinking she was the post mistress, as though someone has found roles for them and is trying to make them fit into the village. There’s a wonderful observation that this isn’t the 2000s but the 50s or 60s, the gag being that a country village is set in time whilst the rest of the world changes around it. The Doctor and Nyssa seem to be bleeding through time to various events in the past 60 years and the Doctor picks up the phone in a police telephone box and hears himself at the other end of the line. He then picks it up again and has the same conversation from the other side – immediately after! Harold and Alice get married and are buried on the same day. Something has happened in Stockbridge to link all these wibbly wobbly fabulously Morrisesque events! Max explains that the same day keeps occurring but with all the things that have happened in the last 60 years, all the births and deaths jumbled up. Always the same day of later summer, over and over. You can’t leave Stockbridge, every time you try you find yourself back by the village green and duck pond. It’s a very clever way of giving characters a life beyond the confines of this story by revealing all the most important events in their lives and by experiencing the moment Dudley proposed to Jane and she refused, falling to her death, Harold and Alice’s wedding, the death of their son and their gravestones we get a broad strokes painting of their whole lives. Brilliantly as we get used to how the story starts jumping about the characters start to acknowledge the scattered approached to the storytelling – Dudley stating as he pulls the Doctor a pint of ginger beer that losing Jane was the saddest day of his life, experienced just seconds before. Jane then reappears as we head into the past with the glorious line ‘I know, I know, I fell of the old bridge to my death but I’m alive again now.’ The Doctor starts to notice inconsistencies in the history of Stockbridge being relived, first Alice was at Harold’s funeral and then Harold is at Alice’s bedside as she slips away. It transpires that they like to take turns, him there at her death and then her there at his. He doesn’t understand if they have been living the same day over and over why they haven’t gotten used to it but he is reminded that these people are their family and friends – no matter how many times they die it will always affect them. The torture of losing their son so young over and over makes this one of the cruellest Doctor Who stories, fancy having to relive that moment every single day. Whenever the pain of remembering the past becomes too much the Lord and Lady of the manner help the village folk to take it away (although the Doctor wonders if that is just so they can experience it again afresh). The older Doctor and Nyssa are scared that their younger versions might leave and his future self might never have existed – that is why they wont let him leave Stockbridge. They have ruled of Stockbridge for so long but they stopped counting after the first 10,000 centuries. PIG – The Psychic Investigation Group are investigating the lost village of Stockbridge. Max never knew that they existed because they are top secret organisation (did I detect a little dig at UNIT there? And with so many paranormal organisations around during the 20th Century