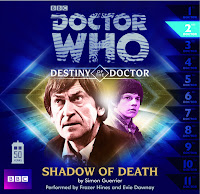 What’s it about: Following an emergency landing, the TARDIS arrives on a remote world orbiting a peculiar star – a pulsar which exerts an enormous gravitational force, strong enough to warp time. On further exploration the Doctor and his friends, Jamie and Zoe, discover a human outpost on the planet surface, inhabited by scientists who are there to study an ancient city. The city is apparently abandoned, but the scientists are at a loss to explain what happened to its sophisticated alien architects. The Doctor discovers that something dark, silent and deadly is also present on the world - and it is slowly closing in on the human intruders...

Oh My Giddy Aunt: His eyes glitter with intelligence and mischief, a perfect summation of Troughton’s Doctor. They glitter with excitement at the chance to solve a mystery. When the Doctor says he knew a pilot that shipped pre-fabricated units all across the system (Steven) it’s the first instance I can remember (Polly and Ben aside, obviously) where the second Doctor has referred to companions of his previous life. The whole point of Troughton’s Doctor was looking forwards, not backwards but this was a lovely touch that added a little extra depth to the scenario. Sophie tries to look for a reason to trust the Doctor but with his heavy lined face like your favourite Uncle, his good humour and knack of getting everybody out of a spot how could anybody not have faith in him? There’s a wonderfully tense sequence where the Doctor is completely alone and trying to salvage the situation but is all fingers and thumbs and menaced by his own shadow. He knows that he shouldn’t linger because the shadow could catch up with him at any moment but he cannot resist a look at the incredible sky…it’s the reason he left Gallifrey after all, to see wonders like that. The shadow doesn’t attack because it recognises that the Doctor has a different relationship to time than the others. I love the twist thrown in that the Doctor was out on the surface for a few years, making sure that Sophie’s expedition could communicate with the Quiet Ones safely. If it wasn’t for his message from the future he would never have spent those years setting this all up.

Who’s the Yahoos: Jamie hardly ever knew what Zoe was talking about because she was always thinking in terms of maths but to save face he nods and smiles and pretends. He struggles to understand that because he is a thousand years after his time then that means that he is technically a thousand years old! This rocky, arid world reminds Jamie of when he walked on the moon. Jamie suffers claustrophobia and culture shock inside the spacesuit as they walk across the airless surface – he was never meant to exist in this kind of setting!

Brains’n’Beauty: Zoe sighs as she has to explain things to Jamie scientifically knowing that he isn’t going to understand her. The truth is he grasps some of the words and manages to intuit the rest. The Doctor has absolute faith in Zoe, if she says she has done something then despite testimony to the contrary he still believes her. 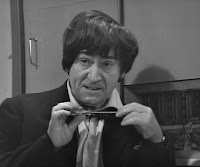 Standout Performance: Hines’ second Doctor continues to be a revelation, Troughton in all but name. I can’t really add much that I haven’t said before; Hines offers an affectionate, realistic and most of all accurate portrayal of the most impish of the Doctors whilst simultaneously playing Jamie with wild eyed wonder. How he hops from one to the other in one scene with such conviction deserves much praise. It doesn’t even feel like an interpretation like with some of the other actors, it just feels like Troughton is really in the studio which affords these second Doctor stories a great deal of scope.

Great Ideas: The central difference that I am noticing about this series and the Companion Chronicles is the prominence of the Doctor in each release (but then given each ranges title that is hardly a great surprise). He step from first to third person really makes a difference in that respect. Realising a pulsar hanging in the skies of a deserted, rocky world is the sort of visual that show would have had trouble visualising at the time (although with the camera sliding so evocatively between the Earth and the moon in The Seeds of Death opening titles I wouldn’t say impossible). Its another tragic reminder of the wondrous sights that the two time travellers would lose when the Time Lords catch up with them in The War Games. An ancient city on a planet orbiting a pulsar, the Doctor describes it as ridiculous but then the best locations in Doctor Who usually are. There are different time zones in different sections of the building, shadows of time like wraiths moving through the rooms and turning its victims a perfect silvery white whilst ageing them to death. I love the way that Guerrier sets up his surprises early on, the statues that the travellers spotted when they first arrived aren’t statues at all but members of Sophie’s crew trapped in time like flies caught in amber. The extreme gravity of the pulsar means that time moves much slower but the base is in sync with standard time. If you go outside it will feel like its only been a few minute when it fact its been a couple of weeks. By the end of the mission they will have all done the same number of shifts in and out to make sure they are all in sync chronologically. By the time they get home everyone they know will have aged twenty years. That’s a fantastic premise for a story with lots of intriguing possibilities. Whether they came to this planet to unpick the mystery of the people who lived here or to dodge military service we will never know. There’s no sign of an exodus or a crisis, the population have simply vanished. The Quiet Ones haven’t been trying to attack but communicate, trying to ask them to keep the noise down. They had lived on a rogue planet that moved freely through space and they had developed a technology that allowed them to capture starlight to power their great city. Their planet had been caught in the gravity of the pulsar and as a last resort to stop themselves from going extinct they used their resources to turn them themselves into beings of pure light and energy. The idea that Sophie and her team can now communicate with the Quiet Ones and start a real exchange of ideas is quite an exciting one. The things they could learn could change a civilisation.

Audio Landscape: These Big Finish/Audio Go hybrids are setting out to prove that you don’t need to swamp the audience with sound effects to tell an evocative story. The audio setting is actually rather limited with only the basic sound effects filled in but this lends the audience more time to focus on the cold beauty of Guerrier’s writing and the strength of Hines’ performance. I wouldn’t want all stories to be cut back like this but as a range of stories that puts its ideas and storytelling before a deluge of sound effects, the Destiny series is proving to be surprisingly dramatic in its simplicity. TARDIS console hum, materialisation sound, squeaky doors, walking on grating, clipping on space suits, bleeping consoles, spacesuit hydraulics, connecting a wire. 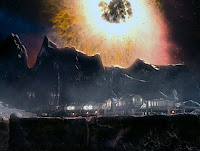 Musical Cues: The music feels astonishingly accurate for the period, revelling in the dramatic stings of musique concrete to make its mark. As things get more tense towards the end of the first half, the music takes on a sinister, ghostly wail that creeps under the skin and festers.

Standout Scene: The audacity of the eleventh Doctor turning up in this story is marvellous. The second Doctor is appalled that the laws of time could be broken so flagrantly, psychic paper, a Doctor from the future sending him a message on psychic paper. He gets an impression of a young man with a floppy fringe and bow tie trying to warn him about salvaging Sophie’s research. The fact that Matt Smith is such a fan of Troughton, it feels like a lovely touch that he should be able to (in character at least) get to speak to him across time. Guerrier draws a parallel between them which is a point well worth making. We never do learn why it was so important that he does as instructed so maybe that storyline will be picked up in the eleventh Doctor’s story.

Result: ‘This thing is intelligent…one touch and we’ll age to death.’ A story that definitely lives up to its title! With its mixture of hard science and adventure-lust, there is a great deal in common between Shadow of Death and the recent Stephen Baxter novel The Wheel of Ice. Simon Guerrier is at his best when writing these hour long adventures, capturing the era he chooses to set in with pitch perfection and always given his chosen set of regulars some firm development. His mixture of cold science and wonder recalls The Cold Equations from the Companion Chronicles range and there are even touches of the new series’ The Impossible Planet in the scenario of a colony on a rocky planet being watched over by a spatial phenomenon. This isn’t just a hotch potch of other peoples ideas though, it has a chilly strength all of its own that comes from Guerrier’s naturalistic dialogue and tough as nails atmosphere. It’s a massively embryonic setting with plenty of storytelling possibilities that Guerrier sets up in the first half so he can get under your skin in the second. This is a period of the show that I have so often come to associate with fun (not just the fact that Troughton, Hines and Padbury were like three kids tumbling about time and space but the general tone of the stories is pure entertainment) and so its like having a handful of cold water tossed in your face to see the era being treated so seriously. It works because of everybody’s commitment to the project and because the writing is so clear of the tone it is trying to achieve. You may just find yourself shivering at the chilling ideas before the end of the piece. My only disappointment was the quick wrap up and the audacity of making the apparently dangerous situation all a big misunderstanding…it wasn’t exactly the conclusion I was hoping for. However the teeth-on-edge tone of the piece for the most part more than compensates and this is still another win for the prolific and consistently excellent Simon Guerrier: 8/10
Posted by Doc Oho at 23:32

It's the best impression of Patrick Troughton I've ever heard. He's actually there! Hines gives a masterful performance. Hopefully there's a lot more of Hines work to discover through Big Finish. I've always been bitterly disappointed that so much of Troughton's work has been lost. This fills the gap nicely.