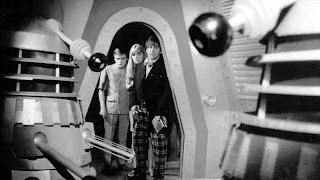 This story in a nutshell: The Doctor seems to have transformed into an impish trickster and the Daleks are at their devious best manipulating a colony of fools…

Oh My Giddy Aunt: Thinking back it was at this point that the Doctor was at his most fascinating because the transformation that has occurred had simply never happened before and the idea of a new actor stepping into the role was so exciting and dangerous. What's interesting is how much the Daleks have become embedded in the public's psyche because all it takes is for the Doctor to defeat them for the audience at large to embrace and accept him as the same man. Certainly as far as Ben and Polly are concerned there is no question of his identity come the beginning of The Highlanders. Wouldn't it have been glorious if at some early stage that this had all turned out to be a lie and Hartnell steps out of the shadows and revealed that the new Doctor was a decoy? The audience is initially as unconvinced as Ben and Polly as he does some extremely un-Doctorish things (or at least things that you could never see Hartnell indulging in) like dancing a jig, playing an instrument and apparently walking out into a mercury swamp without checking the readings first. He feels at his face as if he is discovering himself and when he looks into the mirror he sees his old self appear. If nothing else this powerful visual should convince the audience of the truth of his identity but the truth of the matter is that rather than easing them into the idea, both David Whitaker and Patrick Troughton have fun being evasive in asking the question 'Doctor Who?' There's none of the gentle hand holding that would be offered to a brand new child audience in The Parting of the Ways as Eccleston turned into Tennant. The writer and actor seem to go out of their way to suggest that this might not be the Doctor, that he might be an imposter. It must have felt exciting and unpredictable at the time. There probably isn't this uncertain a tone around the new Doctor until Colin Baker's Doctor arrives on the scene and attempts to murder his companion. We do get a slight explanation that life depends on change and renewal and that is metamorphosis is part of the TARDIS and without it he wouldn’t have survived. There’s a very telling still that sees the Doctor, Ben and Polly putting their heads together to conspire, suggesting an intimacy which perhaps wasn't there with Hartnell.  His first moment of gravity comes when he spots the Daleks and questions Lesterson furiously at his lack of surprise at finding them in there. He orders them broken up or melted down, showing a surprising menacing streak. ‘Fools, stupid fools’ he agonizes  as they take no heed of his words and continue with the Dalek project. Whereas Hartnell was such an external performer and throws all of his weight behind the scenes where the Doctor confronts his opponents, Troughton is a much more internal character, his Doctor always thinking, always observing. Ben describes him as a right little delinquent which does sum him up rather nicely. I love the sequence where the Doctor charms Lesterson into letting him get close to the Dalek in order to sabotage it because this is far more devious and underhanded than the first Doctor would have ever been. I'm quite pleased that 'I would like a hat like that!' was filtered out quite quickly, it's one of the few tics that feels quite forced. He’s very modest about his abilities and shrugs ‘did I do all that?’ once he has defeated the Daleks. Hartnell would be clutching his lapels and basking in the praise. Troughton is clearly initially uncertain in the role but this proves to be a helpful because his uncertainty mirrors our own but at the end of six episodes of Doctor Who magic full of excitement and suspense I was completely convinced that he was the Doctor. Just a very different sort of Doctor. 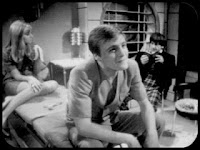 Able Seaman & Lovely Lashes: I could forgive Michael Craze anything because I fancy the arse off him! Ben is almost violently suspicious of the Doctor in the opening scenes, wanting to know how these new developments will affect them. When he was a kid he used to leave opposite to a brewery where you could go for a walk and have a drink at the same time! He’s furious, almost obstinately so with the Doctor’s playful attitude during a crisis. Showing that he is still a newbie at all this he thinks the Daleks are ‘not very lively’ but soon learns otherwise. I like how Whitaker has Ben using genuine cockney rhyming slang. Ben votes they go back to the TARDIS because he has had enough of this dump! Whilst Anneke Wills has a two week holiday it is down to Troughton and Craze to hold up the show and what is interesting is to see Troughton acting against a male who isn’t Hines and there is a very different (and not entirely unwelcome) chemistry between them. Polly isn’t quite as distinctive as Ben in this story but when they are all together there is no denying certain chemistry between the three actors. Polly is almost instantly convinced that this is the Doctor and you can tell how much Will is getting off on the introduction of Troughton to the show. I love how rude she is to Janley, Polly is always at her most intolerant when she is clashing with other women (see also Kirsty in The Highlanders). In the later episode when Polly emerges and Ben is written out (this time it's Michael Craze's turn to head to the Bahamas) she expresses genuine disgust for the horror that the Daleks spread around the colony. Writing out both characters for a handful of episodes each gives them both a chance to show how successful they would have been as solo companions but this is one pair that work at their absolute best when they are together. That this isn't the case for the most part is another unique point in this story's favour. 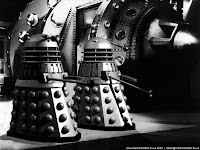 The Bad: My only complaint are a few aesthetics that don't quite come off (lava lamps, fake backdrops and an army of Daleks represented in cardboard) but looking back on sixties television from the 21st Century is always going to judgmental affair because the standards television now are so masterful.

Result: Astonishingly good, The Power of the Daleks is my personal favourite Dalek story. If you were going to kick start the show and give it a new lease of life with a spanking new lead actor then couldn't do much better than handing him a story as gripping as this one to prove what he is made of.  The Power of the Daleks is another lost classic, a masterpiece of character drama and suspense building from David Whitaker, one of the master craftsmen of Doctor Who.  He takes Terry Nation’s creations and breathes new life into them. No longer are they just an army of killers but instead formidable tacticians and psychological manipulators and they prey on the weaknesses of this colony until they have enough strength to burst from the capsule and slaughter the lot of them. Less is somehow more and relying on their intelligence rather than their usual habit of strength in numbers and kill first, think later is far more effective expression of their tenacity. By the end of the story there is an argument to be made that the colonists have killed themselves, important figures all planning to utilise the Daleks in different ways and having their wishes granted and then twisted upon themselves. You can't make a bargain with these creatures because they will always demand payment and there is only one reward they seek. The way the story is structured with each episode raising the stakes is superb; the Daleks are revealed in a decrepit state, they are broken into service, they gather resources, they kick start their own production line, they build up an impressive fighting force and finally they break free of the capsule and set off to massacre the people that have made their resurrection possible. The Daleks hold their fire for five episodes so when they are finally let off the leash they are relentless. Tension grips from episode one, builds exponentially and climaxes in an unforgettable bloodbath in the final installment. This is all a powerful backdrop for the new Doctor to establish himself against, Patrick Troughton emerging from this drama as a impish, awkward, intelligent and modest version of the hero we have adjusted to. He gets some time alone with Polly and Ben (both Wills and Craze taking a holiday) and they both get the chance to evaluate the man and arrive at the same decision come the conclusion. This is the Doctor, but an exciting, fresh version of the man. Memorable guest performances abound, the direction is top notch (the telesnaps and few seconds of footage we can watch make this look mouth-wateringly tense) and as a opening to a new era the bar has been set impossibly high. My number one 'I wish this could be discovered' story: 10/10 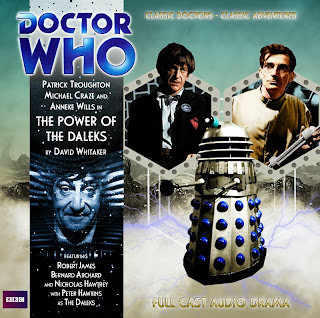 If there was one story I could wish back into existence then this one would be it.

I've wanted this one back for YEARS! One of my absolute favourites http://thetimevault.wordpress.com/2011/08/03/day-30-the-missing-story-i-would-most-like-to-see-returned-to-the-bbc-archive/

The animation for this DVD release was very good (apart from a few problems), but I would love to see this story recovered. It is an amazing debut story for Troughton, and I'd rate it 10/10