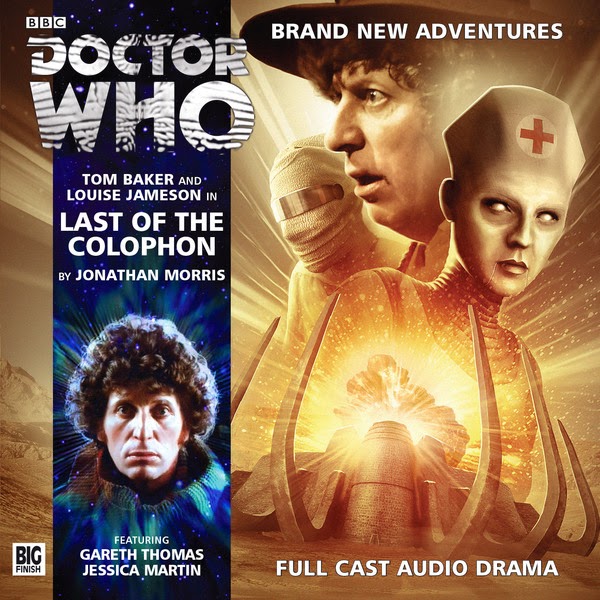 What's it about: The planet Colophos is a dead world. Nothing but dust and rubble – and the ruins of a once-great civilisation. But is it really as dead as it appears? When the Doctor and Leela land, joined by the crew of the Oligarch survey ship, it’s not long before they receive a communication from one of the ruins. A communication from Astaroth Morax, the last of the Colophon. Attended by a sadistic robot nurse, Morax is in a wheelchair and bound in bandages to conceal his terrible injuries. But is he really as powerless as he seems? What became of the rest of his race – and why didn’t he die with them? Entering his lair, the Doctor uncovers a terrifying secret…

Teeth and Curls: Bracing is what people call cold when they are on holiday and since he is always on holiday that is his preferred term for extreme climates. He's in an especially witty mood this time around and enjoys making a song and dance about new information he is given before dismissing it utterly. He has no qualms about making the suggestion that they have come on holiday to a lifeless rock - if anybody was likely to do so this improbable duo would fit the bill. On a good day the Doctor calls nearly being killed quite an easy exercise. I'm pleased that the Doctor was smart enough to go along with Morax's tragic tale even when he didn't believe a word of it. Baker has a way of sounding as though he is taking the piss even in an incredibly tense situation. His 'tap-tap-tappity-tap' had me giggling in at a very inappropriate time. I thought this might be the first story of this season where the fourth Doctor restrains his malice but he reserves it for the final sick joke at the villains expense. Nice one.

Noble Savage: The Doctor calls Leela a creature of limited cultural horizons which I thought was quite harsh given he is the one that has been trying to push those boundaries. Leela scoffs when an inferior opponent threatens her. In a story that signposts its bombshells, the moment that really took me by surprise was Leela's quiet (you really have to try and listen out for it) admission that she wishes she could go home. A small moment within this story but I think this might have greater ramifications down the line, especially in Jameson's own script.

Standout Performance: It has been some time since Gareth Thomas has turned up in a Doctor Who story and so long distant memories of Lord Tamworth did not affect my enjoyment of his villainous turn in Last of the Colophon. Thomas' voice has changed drastically since his Blake's 7 days and so I don't have the same problem that I did with Michael Keating in The Evil One. These days his distinctive, gravelly voice is simply made for audio. Having two B7 actors turning up in an audio season of Doctor Who whilst the other series is currently being made by Big Finish is a nostalgic reminder of the time when the two television shows shared a pool of actors. It is a great performance, Thomas never pretending to be whiter than white so that when the extent of his crimes is revealed it isn't a terrific surprise. And was I the only one who was getting a Shivan vibe from the Blake's 7 episode Voice from the Past from Morax? I was wondering what was going to be unveiled beneath those bandages...

Great Ideas: Whatever civilisation was on Colophon before has exhausted all the fossil fuels so there are slim pickings to be taken away. Why make a door that is designed to open from the inside only? Because it is designed to keep something inside... I love moments of uncertainty like that, when what we understand about a story is turned on its head. From victim to prisoner. Many years ago a pathogenic strain was created which was lethal to all known medicine and within days the resulting infection had consumed the world. Morax performed an experimental treatment on himself which left him crippled but allowed him to the survive the contamination of his world. In reality Morax was one of the worlds greatest scientists but he used his genius for evil - he sought power and killed all those who stood in his way, his cruelty and resourcefulness without precedent. He was the one who released the bacteria that condemned his people to destruction. His punishment when his people knew they would be driven to extinction thanks to his actions was to sentence him to eternal life, enslaved by a robotic nurse. The reveal that there is nothing beneath Morax's bandages was lifted straight out of The Three Doctors but it still made for a chilling scene. Morris uses Morax's blindness to great effect, one of the few writers of late to tap into the possibilities that the audio medium brings. It really feels as though we are inside his head as Leela taunts him, bringing all of her prowess as a huntress to mock his affliction and disorient him. I especially liked it when the lights were extinguished - now all the characters are as without visuals as the audience and need to explain their actions. Morax has altered the harmonics of the standing waves of his constituent atoms by application of photon radiation. Now light passes straight through him, making him invisible. Unfortunately he has also committed suicide by doing so, weakening the binding forces that hold his body together.

Audio Landscape: Once Morax's mask is torn away (both figuratively and metaphorically), sound designer supremo Jamie Robertson gets the chance to play some wonderful audio tricks on the listener, making it sound as if the husky madman is all around you. A ship firing its engines and stabilizing in orbit, a grumbling sky, breathing equipment, walking on rubble, gun cocked, the robotic nurse, Morax's wheelchair, explosions, gun shots, alarms, auto destruct, an almighty explosion, the lights snapping off, banging on the door.

Isn't it Odd: Putting two and two together was never my strongest ability but even I figured that the initial sympathy towards Morax (pleasingly from both Leela and the Doctor, showing the humane side to what they can bring to a story) would turn sour once they figured out why he was imprisoned on Colophon. If the story didn't take a dark turn like that...well there wouldn't be much of a story. It is hard to pull off the double climax in any story because you have to time it just so that the false ending is close enough to the end of the running time as not to draw suspicion to itself. Unfortunately Colophon tries to pull off this trick at 45 minutes into the narrative, which if this were the case, would make it the shortest (and least economical) 4DA on the market.

Result: 'We're the ones that set him free!' A pinch of Talons of Weng-Chiang (Morax's condition), a sprinkling of Planet of Evil (a survey ship landing on an alien world), toss in some Brain of Morbius (an engaging scientist with a dark secret) and a huge dollop of The Armageddon Factor (a world devastated by war, a story told in a handful of sets)...mix it all together and serve it up as a two part audio story and slap the title Last of the Colophon on it.  I have to admit that this is one of the stories in the third season that had me the most excited before I heard it (along with White Ghosts and The Abandoned). The cover is phenomenal and after reading the synopsis I felt wrapped up in the warm glow of nostalgia for the era (a dead world, a survey ship, a brilliant scientist under house arrest and a robot nurse sound like the ingredients for an engaging fourth Doctor romp). I've been harping on about how traditional these fourth Doctor adventures have been to their detriment and along comes a story which does absolutely nothing new that I thoroughly enjoyed. Go figure. Episode one is extremely predictable (Morax is the villain of the piece as soon as Thomas utters his first word) but even so it builds to an impressively creepy climax with the characters trapped inside the prison at the mercy of the madman. I might sound like a broken record but this is another terrific showcase for Jamie Robertson's talents, one of the strongest talents to have been acquired by Big Finish in the past five years. Much of the effect of a story this slender comes down to how it is presented and Robertson provides sounds wonderfully frightening moments, shock sound effects and a big, filmic soundtrack. I think Jonathan Morris understands the fourth Doctor era (and the fourth Doctor himself) better than any of the other writers in the range. Whether he is writing a witty Wodehouse pastiche for Romana, a claustrophobic underwater SF tale featuring a villainous K.9 or transporting us to the budget saving three set spectacular on the dead world of Colophon there is something authentic of the era about his tales whilst still being solid stories in their own right. Given his penchant for Douglas Adams pastiche (check out Babblesphere, The Beautiful People, Festival of Death and The Tomorrow Windows), I am assuming he is going to feature heavily in season five. I can't wait. If you are seeking out the 4DAs because you are looking for a nostalgia fix for the Baker years on television, this is by far the most accomplished that has emerged. Utterly clichéd and for once it's a plus, Last of the Colophon embraces predictability and uses it to deliver an energetic hit. Gareth Thomas excels: 8/10
Posted by Doc Oho at 00:14

Great review,and glad to see that I wasn't the only one to make the Shivan connection.

Earn free satoshis from Easy Bitcoin. 11 to 33 satoshis per 10 minutes.

If you're looking for the ultimate Bitcoin exchanger, then you should choose Coinbase.