Destroy the Infinite written and directed by Nicholas Briggs 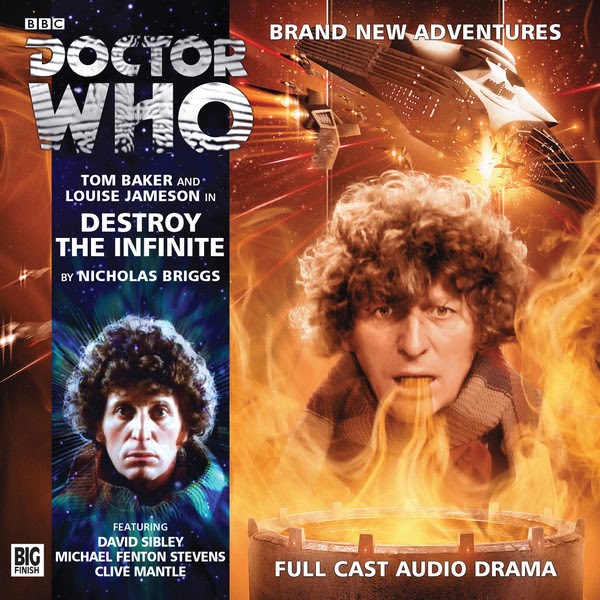 What's it about: The colony planet Delafoss is occupied by the army of a rapacious alien force known only as the Eminence. These slave armies of terrified humans are commanded by the dreaded Infinite Warriors - impervious to most forms of firepower, voices like icy death. The Doctor and Leela arrive expecting to find Earth’s most successful, unspoiled colony. Instead, they are confronted by a planet choked by industrialization. And at the heart of it all, the construction of something that the Eminence intends will wipe out all human resistance once and for all. For the first time in his life, the Doctor confronts the Eminence… and things will never be quite the same again.

Teeth and Curls: Unbelievably this is a story that has Tom Baker's Doctor possessed by an evil gaseous entity and doesn't do anything remotely chilling with it. Beyond the shock factor of the Doctor being taken over (which is rather spoilt by the cover) it merely seems to result in Baker droning out his dialogue like a roboman straight out of Dalek Invasion of Earth. I would have given him carte blanche to really go for it and growl out his dialogue but instead Briggs seems content to rein him in. Given how genuinely frightened Colin Baker played his fear of the Eminence in The Seeds of War I was expecting something a little more than this. Wouldn't it be dramatically more satisfying if the Doctor committed unspeakable acts under the influence? Instead he is just pretending to be under their spell so he can get close and affect their defeat. How...obvious.

Noble Savage: Leela is perfectly convinced that the TARDIS never lands where the Doctor thinks it is going to. Given that she is from a human colony herself, it is rather sweet that the Doctor has brought to Leela to one of her races most successful examples. It's a chance for her to bask in the glory of what humanity can achieve. Leela can sense war even before the shots are fired. Is it wrong to celebrate a victory? Leela wants to bask in the defeat of the Eminence but the Doctor's forlorn attitude reminds her that good people have died. Her conscience is developing.

Standout Performance: This is an astonishing cast featuring Tom Baker, Louise Jameson, Michael Fenton-Stevens, Clive Mantle and Ian Hallard...none of whom are remotely challenged by the hollow characters they are inhabiting. Hallard probably makes the most impact because he gets to play his 'what-ho, old bean' Biggles character to the hilt.

Sparkling Dialogue: 'What can be so powerful that it makes a man forget the people that he loves?'
'Sometimes I think you humans take to war with a little too much vigour.'

Great Ideas: Can you think of an opening that screams of Doctor Who more than the one that kick starts Destroy the Infinite? A subordinate being called before his almighty rulers, being praised for his good work and then tortured out of recognition as he becomes an Infinite Warrior. There are shades of Timelash, The Sun Makers, The Krotons...an innocent member of this planet being summoned against his will. A planet of unnatural clouds, burdened by heavy industrial pollution. People say the Eminence has no physical form, that it travels as an orange mist in caskets that appear from nowhere. People have started to think of them as Gods or demons. Many life forms have evolved into gaseous states (if the Doctor is to be believed in Utopia then the human race suffered that fate at some point in its future). The Doctor saw terrible visions of the future when he was at one with the Eminence, visions of entire galaxies consumed by the Eminence.

Musical Cues: More wonderful music courtesy of Jamie Robertson. His soundtracks are absolutely one of the highlights of the range. 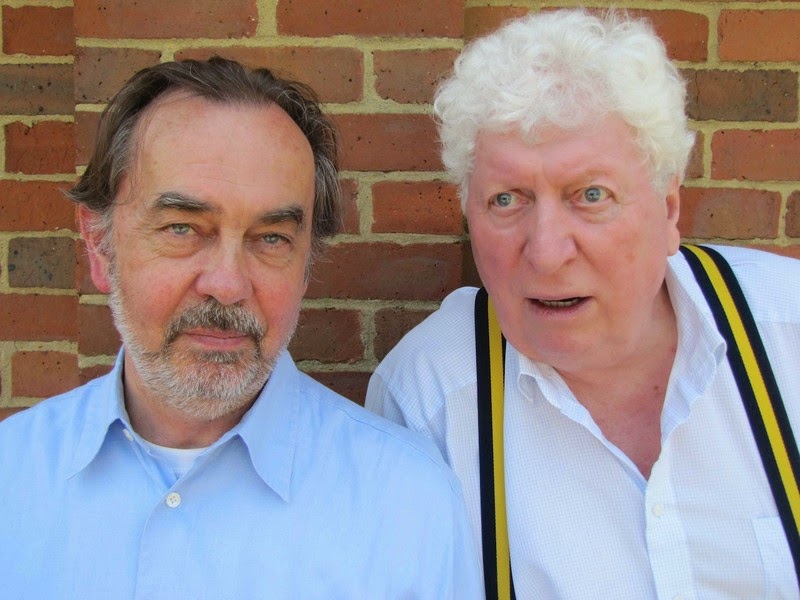 Isn't it Odd: It is strange to return to a point where the Doctor hasn't met the Eminence before given that as an audience we have already seen the sixth (The Seeds of War) and eighth (Dark Eyes II) Doctors come up against them. Rather than play this as a story where Briggs acknowledges that this might be where the Doctor first meets them but we already understand their raison d'etre this is played as if we have no knowledge of the Eminence at all. It feels like a debut for the race all over again. It might feel authentic to tell a story of conflict through the eyes of a handful of people given what Doctor Who's resources were like at the time...but didn't we just do that last month with Last of the Colophon? This is definitely a case of poor juxtaposition and Destroy the Infinite comes off worse as a result because Briggs doesn't quite have Morris' excellent ability to capture characters with a few lines, there is relatively little humour or personality to this bunch on Delafoss. Tillegat is a thankless role, a character constructed out of pure cardboard (or should that read plot convenience) and killed before we get to know a single thing about him. How can we care about these people if we haven't been given the chance to get to know them? Isn't it bizarre how a war on an alien planet can be staged to appear to be a direct riff on the Second World War complete with stalwart upper class soldiers and military generals? Wouldn't you go for something a little more alien than this? Defeat of the Eminence is effortless...are they really a credible threat?

Standout Scene: When the Eminence tell the Doctor that he is the same as them are they letting on more than we are aware of? Are they somehow linked to the Time Lords? Are they the Time Lords in the far flung future? Watch this space...

Result: War, possession, gaseous entities...how many clichés can you pack into one Doctor Who story? I think it is a little unfair on the era that this story is supposed to be aping to suggest that Destroy the Infinite is merely going for the nostalgia jugular. It's something that I have heard a lot lately with regards to the 4DAs (especially in my own reviews) and I think it is worth remembering that the Hinchcliffe/Williams eras are some of the most innovative and imaginative periods of the show. Certainly there was nothing that surrendered quite as much to formula as The Evil One or Destroy the Infinite. The producers would simply not allow anything this predictable to screen. What Briggs is doing it pulling a number of Doctor Who clichés out of the bag (Master + companion gone bad, war + possession) and applying them to the bare bones of a narrative and injecting it with a sense of adventure. Superficially fun but the merely the essence of a Doctor Who story rather than a substantial one. Destroy the Infinite feels like one long action set piece rather than a plot that has been well thought-out and given they are as blankly characterised as the guest cast this story could pretty much feature any Doctor/companion combination. The Doctor and Leela could easily be excised and the third Doctor and Jo or the sixth Doctor and Peri slipped in. I'm not saying that every piece should be uniquely carved to a particular set of regulars (although some more the of the probing of this pair would be welcome after flirting with the idea in The Heroes of Sontar/White Ghosts) but they should never be this throwaway. This is passable filler (I seem to keep saying that about Nick Briggs' 4DAs, easily the most expendable stories of the range because they never attempt to think outside the box) but as an Eminence story The Seeds of War was more intriguingly structured and detailed (with a stronger cast of characters) and Time's Horizon in the Dark Eyes II box set was much more frightening. I had no problem listening to Destroy the Infinite but I wont pretend it challenged me for a moment. Listening to a 'written and directed by Nick Briggs' story at the moment is like enjoying a Chinese buffet; instantly fairly gratifying but you will have forgotten all about it within five minutes and never be able to distinguish it from the other meals you've had for the rest of your natural. Sometimes it's nice to chow down on something memorable: 5/10

This should have been Big Finish's "Best of Both Worlds", but was instead a rushed script.

I am very glad that I have come across to your blog because you have shared a one of a kind blog which has all the things in a very pleasant manner. The information you shared here is unique and informative which is very rear to see nowadays.I am writer working at write my essay for the past 7 years.I would have missed the useful information if I didn't find your site. So keep on sharing hope to see more from you.