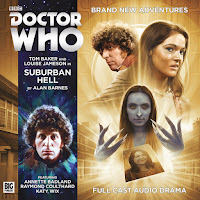 What's it about: Somewhere in a suburb of North London, there's a crisis. More than a crisis, a positive disaster: Belinda and Ralph are expecting four for supper, and there's no Marie Rose sauce for the Prawns Marie Rose. All in all, the evening couldn't possibly get any worse... Until the doorbell rings, bringing the Doctor and Leela to the dinner party. They've got a crisis, too – temporal ruckage has sent the TARDIS to another time zone entirely. Meaning they might have to endure a whole evening in Belinda's company. But the Doctor and Leela aren't the only uninvited guests tonight. There's a strange fog falling, out in the road. And in that fog: savage blue-skinned monsters, with dinner party plans of their own. Because it's not Prawns Marie Rose on their menu – it's people!

Teeth and Curls: I love the idea of the Doctor and Leela turning up to investigate a temporal ruckage at a dinner party being held by a man and wife, with both spouse thinking they are the others' guests. Anything but a lager for the Doctor! He's deliberately baffling in places to keep everybody on the wrong foot. You can tell that Tom Baker is loving being able to call a character 'Thelma from over the road' and he relishes every opportunity. Most of his plans tend to come with the caveat that he might be ripped to pieces in the process, occupational hazard.

Noble Savage: Taking inspiration from The Talons of Weng Chiang, I could instantly see the merit in dropping Leela into a dinner party where her savagery and lack of table manners would contrast amusingly with the other guests. Which is why it is bizarre that all those opportunities for culture shock were squandered and Leela was effectively shunted onto the sidelines.

Standout Performance: Katy Wix makes quite an impression...a pretty irritating one! I cannot fault the performance but the character of Belinda the control freak wife (with an emasculating line in putdowns to her husband) is the audio equivalent of pubic lice. She just made me want to itch. It's always lovely to catch up with Annette Badland, although she has been in a fair few stories of late.

Sparkling Dialogue: 'There's only one place we can go...upstairs!'
'Are you in the realm of the dead?' 'Well I'm in the late 1970s so much the same thing!'

Great Ideas: There have been a couple of Doctor Who stories that have gone down the domestic route before with varying degrees of success. If you are going set a story inside a single house I think you have to be very sure of your story and your characters because you have little local colour to rely on. The Deadstone Memorial was a fantastic example, the Doctor entering the world of a family at siege, trying to solve the possession of a little boy and remembering that the details (ie the people) in his adventures are just as important as the details (ie the end of the universe stuff). Fear Her on the telly was less victorious, featuring an Olympic backdrop that violated the story and a bland characterisation across the board (a really dreary alien of the week didn't help either). So how does Suburban Hell fare?  This is the artificial world of 1970s dinner parties where the common man is trying to appear as conservative and as business class as possible by dolloping on the Marie Rose sauce and talking money and politics. It's the era of plastic - coffee makers, Tupperware, fake smiles and pretensions of being better than you are. Within this setting you have Belinda the wicked, putting together the most artificial of social gatherings, Ralph the long suffering husband, Thelma from over the road, Pete the toff who likes showing off his wealth and Penny the long suffering wife. The house takes on a personality of its own. It was vacant for 40 years and happy to be so but when the Belinda and Ralph arrived and weren't repulsed it seemed like a match made in heaven. Thelma (from over the road) is a witchfinder general, which is a witch that finds things, in general. The blue woman in the painting was real once, a mutant born with the most terrible glamour that made her impossible to resist, She used her innate abilities for evil and in time she came to dominate every living mind in the entire constellation. Before she died she forced a witch to put an imprint of her malign psyche into a portrait - her acolytes stole the portrait and took it to Earth. If a suitable host can be found then she can continue her evil work in this arm of the galaxy. Hopping between the two time zones provides some amusing moments, especially as Leela learns about the Doctor's activities in the past, we head back to experience then and then head back to hear her reaction.

Isn't it Odd: The ending is so abrupt I thought that I must have missed something. The whole story comes to 52 minutes which feels remarkably short, even for a 4DA. I was right in the thick of the action, things were starting to cohere and then it was goodbyes by the TARDIS. If everything was wrapped up satisfactorily perhaps  blinked and missed it.

Standout Scene: I automatically assumed that this story was set during the 1970s because that would have been the contemporary period this would be set in at the time (and the Marie Rose sauce screamed of the era). However the twist that it is a themed party comes from nowhere and genuinely surprised me...only for the story to head back to the 70s anyway.

Result: What is going on with the fourth Doctor range? This is the third story in a row that is a massive departure from the 'it's 1977' nostalgia rush that the range has been keen to capture in the past. I could really get used to this. Remember when Tom Baker said that he turned up at a random house and asked if he could watch The Deadly Assassin part three because he was worried about the content, well the fourth Doctor and Leela emerging as guests at a dinner party and the entire story being contained in a domestic setting is just as wonderfully bizarre. I got a Sapphire and Steel Adventure Five vibe from this story that pleased me because I think it is one of the unsung stories from the series - a mystery spread across two time periods in a domestic and yet completely artificial (in terms of the furnishings and the relationships between the characters) setting. This is a lot more frivolous and frothy though, which might explain why it feels so throwaway when it is genuinely doing something a bit different. Splitting the narrative between two time zones gives the story more scope and allows the Doctor to investigate the cause and the Leela the effect and between them they sow up who is the vessel that the alien is looking to inhabit. Tom Baker is on fine form but he has been all year and I really think he has come into his own on audio now. My only complaint is that this had the opportunity to be a devastatingly witty, almost Coward-esque play but Barnes doesn't quite have the comedy chops to pull it off. Instead we have to make do with an entertaining romp but don't underestimate Suburban Hell because I describe it as such because so many 4DAs have been anything but: 7/10

I've loved this blog and actually wanted to comment earlier however I was having some account shenanigans, hopefully it'll work now. I completely agree Suburban Hell was lots of fun for Tom and Leela, albeit I do wish Leela's lack of politeness had been bought up. Also on the Leela front I didn't like the scene where she sent Pete out while she stayed with the women (I can buy Leela wanting to guard but not her going along with the women = need protecting vibe).

However, I have to disagree on Belinda's irritation factor, yes, she was a completely annoying presence through the hole business (though I did find the reason for this entertaining), however I actually thought that ws rather the point, and the ending with the shifted timeline seemed to give the hole thing a lot of reason and closure.

In an odd way, the very fact I found Belinda so believably vile (I have met people like that), made this feel one of the most real world audios I've seen, almost getting into Russel T Davies teretory, though I didn't really buy the 70's theme party business.

Certainly a lot of fun, actually far more fun than I initially thought from the trailer last month, and I hope we see more of the same from Tom next month.

Btw, love the blog, and hopefully will be commenting, sinse I'm currently also watching Buffy for the first time and reading your reviews after each episode.

Missed the Musical Cues section of the review, and to me the music really gave the story it's feel. And I agree with Dark, This definitely feels like Russell T. Davies.

More "Abigail's Party" meets "Sapphire and Steel" than Doctor Who.

To many cracks from the Doctor, though... that is becoming a Big Finish irritation.

So far this fourth season has been the best for 4DA. I listened to the behind the scene and how Tom Baker felt much more happier and excited doing the Big Finish, compared to his early days in the television show. Even Louise Jameson caught him sitting alone, taking a deep breath, and just saying "I am happy." So frickin adorable..I'm glad that he and Lou got a much much better relationship right now.

I agree this could have been a bit wittier, but it's still entertaining to listen to. This has been a pretty good run of 4DAs.