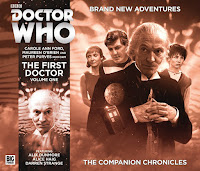 What's it about: Steven Taylor left the Doctor and the TARDIS to become king of an alien world. But it's now many years since he gave up the throne and went to live in a cell in the mountains, out of sight of his people. He's not escaping his past – quite the opposite, in fact. As his granddaughter, Sida, is about to discover...

Hmm: A manifestation of the Doctor made out of pure light? A hologram beamed from across the stars. Each night Steven will be able to reach out to him and each night they will have longer together. This planet is turning so they only face wherever the Doctor is for a brief while. The Doctor is incredulous when he realises that Steven gave up he throne. He's always been willing to let somebody die if the ends justified the means (at least in his mind).

Aggressive Astronaut: Steven said he would never return to the city, that he planned to lived out his days in seclusion in his house in the mountains. But life is what happens despite all your plans. He's having a radio telescope built and he's making big plans. I love this new dangerous Steven, the sort of man who would lock his own granddaughter in a room overnight to prove a point. Steven has made travelling in time sound exciting and magical but it is easy to forget how strange and frightening it could be too. Does he yearn for those days again? Or does he just yearn to be young again? Steven always took pains to spell out he cost of travelling with the Doctor (given he experienced the more tragic aspects more than most), the people who died, the countless multitude of names he never knew and the ones he had been close to. Katarina, Sara, Oliver. The sacrifice of giving up the throne was all his own doing, nothing to do with the Vardan. Steven isn't sure he could live with himself if it meant that every action he had taken was under the direction of an alien presence in his mind. Steven wondered where his daughters coldness came from as it was often directed towards her daughter. Even Sida becoming President wasn't enough for her. Steven has always been a moral soul, one who has the courage to stand up for his convictions. Does that mean he was willing to suffer the consequences of sacrificing his own daughter in order to stand up for what he believes in? Did giving up the throne ultimately kill Dodo?

Standout Performance: There is something about Purves' interpretation of Hartnell that is a cut above all the others. He doesn't sound much like Hartnell but he has the attitude, the snippish behaviour and the wisdom of the character that transform his version into the real thing. I can understand perfectly why they waited until the last two stories before the Doctor had a substantial role in events. A huge round of applause for Alice Haig too, who has taken what was a pretty thankless role as Steven's granddaughter Sida (a role that was initially just somebody for him to narrate the story to and to react to the tale he was spinning) and turned into a character who really commands the attention. Sida is every bit Steven's granddaughter; assured, intelligent and capable of looking after herself. It doesn't surprise me one but that she wound up as President of her world. Lisa Bowerman makes another appearance but a much more attention grabbing one, disguised through a silky filter and purring with menace.

Sparkling Dialogue: 'Reaching out across space to grip the hand of an old man who wasn't there...'
'Amazing what happens when you say you wont be available. The whole world wants a quick word.'
'It's frightening. Being in charge. Making the choices when no-one else will dare.'

Great Ideas: It's nice to be rewarded for listening to these stories in order with elements of all of the Steven adventures cohering in The Locked Room, particularly The First Wave. Simon Guerrier proved in that story that the Vardans could be a genuine menace if treated with the right amount of seriousness and ingenuity. A race composed of pure energy able to move on any wavelength at the speed of thought. They could reach into your head and read your secret thoughts, fry you alive in an instant. These Vardans aren't sheets of tin foil being waved about but an insidious threat that can beam inside your head in an instant and fry your mind before you can even develop a thought of panic. Oliver didn't die for nothing, the Vardan invasion was halted and he saved the lives of his friends but it does stick in the craw to think that an echo of their existence survived. The Vardan has been manipulating Steven's thoughts for all these years, making him do its bidding to reach out to the Doctor and bring them together again. Having a moral debate about killing one to save many is much simpler than putting the ideas into practice. The Locked Room doesn't skimp over the massive responsibility of having to take a life. I love the idea that in order to kill a Vardan you have to unravel it into a string of 1s and 0s. 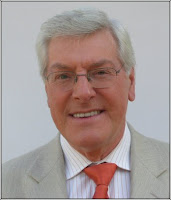 Audio Landscape: A drill burrowing into the ground, hover cars, walking on shingle, the Vardan shimmer, gunshot, bolts being thrown, grappling on the floor.

Isn't it Odd: Why? Why are the companion chronicles so overwhelmingly successful when the main range continues to struggle and stutter every month? On a creative level I can see that David Richardson is producing and Jacqueline Rayner is script editing and both have proving to be at the top of their game for many years now. They don't seem to be suffering from Who fatigue in the same way that Briggs and Barnes do over at the main range of late (if The Defectors and Last of the Cybermen are anything to go by). The length is also a factor, an hour is a great length to tell an audio story in. Just long enough to entice and excite without any time for padding. It also helps that the best writers seem to attract to this range, including the best contributors to the main range such as Jonny Morris, John Dorney and Matt Fitton. I also think I prefer the personal narration that the companion chronicles afford, we get much closer to the characters than we do in the full cast dramas of the main range. It's one of the reasons I struggled with the initial Early Adventures, before I adjusted to the format. Every just comes together so well with this range, I'm extremely pleased that the stories are continuing.

Standout Scene: The Vardan escaping it's cell and wrecking havoc is a staggeringly dramatic moment.

Result: 'The thing about life, the one lesson that I've learnt is just when you think you know what is going on, it hits you with something unexpected...' Every now and again the companion chronicles creates a secondary narrative to hang the central narrative of a story on that takes on a life of its own and needs an entire story to deal with its weight of expectations. It happened with the Sara Kingdom trilogy and the house haunted by her presence, it happened in the Zoe tetrology and her returning memories in her prison cell and now it has happened in the Steven Taylor trilogy detailing his old age on the planet of the Savages. It's a real feather in the cap of the writer (usually Simon Guerrier if I'm honest) that the method telling these stories is so substantial that they demand their own attention. Where The Founding Fathers is all set up, The Locked Room delivers the sort pay off that makes it by far the superior story and is far more the sort of standard I expect from Guerrier. It's an intimate piece that gets inside it's characters heads and shines a light on the disturbing things that are festering in there. Characterisation is paramount and both Steven and Sida are treated to some gorgeous development, built into a story that has personal consequences for both of them. Purves' Doctor gets a real chance to shine too and his is my favourite of all the interpretations, gruff, thoughtful and burningly intelligent. The Locked Room features the return of a really awkward monster from a television story, reborn in the first Doctor adventures as a terrifying foe. Most of this story is contained to one room but it has far reaching consequences and with each passing scene it gets more and more absorbing. Am I greedy that I fancy a few more stories set on this world featuring these characters? Maybe, because the story feels pretty much told. I'm sure Guerrier has something else equally gripping up his sleeve next: 9/10

I completely agree, this one was awsome, probably an even better companion story than the Zoe ones although I'd have to confirm that.
I did wonder why the copy doctor seemed to be shunted off at the end of Founding Fathers, well now I know why, sinse the setup here was great and it definitely paid off with one of the best character studdies we've seen of Steven, his grand daughter and even The first Doctor, indeed I'm usually a little wary of stories that go "oooh look we'll pull the Doctor out of this Tv adventure just to muck around with his mind" but between Purves superb Heartnal impression (which is also a personal favourite), and just the great character study this never seemed too contrived at all.

I found it interesting that in the extras Simon Guerrier mentioned having to pay a large amount of time to the script and his initial idea not being surprising enough, sinse one thing I really noticed with this one is what I believed would happen was not what did happen. Steven's statement about life being when all your plans go wrong seems all the more apt for this story, particularly with where it winds up in the end.

A great review. I am really loving a Simon Guerrier story. I especially love how they teased a heartbreaking ending but spun it differently. And I agree that there is something about Peter Perves' First Doctor. It is my favorite. I wish he had been used in "The Light at The End." I just "get" who he is meant to be on an emotional level. I was confused about Steven not realizing that he had met a future incarnation of the Doctor (The Five Companions). I'll have to go back and listen to see if there is a logical reason he didn't put it all together.