The Fate of Krelos written and directed by Nick Briggs 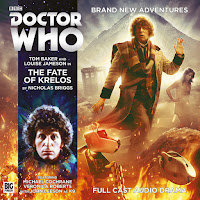 What's it about: There are dark skies on Krelos… and something gigantic is descending. Meanwhile, the Doctor and Leela set off for some fishing in the mountain pools of Krelos. K9 has interfaced with the TARDIS and has reactivated the architectural configuration from the days of the Doctor’s second incarnation. In passing, the Doctor notes it could do with a good clean. And there’s a familiar piece of material snagged on the console. Far up the mountain, an aged explorer is in trouble. Will the Doctor and Leela be able to save him and his planet? And what is it that K9 has discovered in the TARDIS?

Teeth and Curls: 'I'm just a freckle on the nose of eternity!' The Doctor is in the mood for a holiday, which can only mean that bad things are on the way. Doctors four and six both have fishing in mind when they want to relax, is that because they have such loud and explosive personalities that when they look to unwind a little quiet time of inactivity is the best possible medicine? He hasn't seen the food dispenser in years. The Doctor misses some of the ergonomic features of his old control room from when he was in his second incarnation, seeing it again makes him all nostalgic for those days. He remembers Jamie fondly, a brave and fierce soul. He doesn't quite know what happened to his friend but figures he must have died in battle. You cannot argue with fate. Nick Briggs gets quite a tough rap for his 4DAs but it has to be said this pensive moment from the fourth Doctor is quite touchingly written and played. Don't think the Doctor doesn't think about going back and preventing the fate of Krelos but he recognises if he does anything of the sort he will be as bad as those high minded meddlers in the Celestial Intervention Agency. Listen to how the Doctor growls with disgust at the thought of somebody attempting to wrestle control of the TARDIS from him.

Noble Savage: Leela cannot see what the point of fishing is if you are not going to kill and eat your catch. She has developed a playful relationship with the Doctor, so much so that she can tease him into admitting that he has materialised the TARDIS in the wrong place. Leela reminded me of Donna in this story, acting as the Doctor's conscience. She understands that the Doctor is wise and clever in his observation that fate is determined but she knows in her heart that it is wrong to stand back and leave people to suffer. And she isn't afraid to tell him. Leela knows that the Doctor could rustle up an army in a moment, all those lives he has saved, all those who honour his memory.

K.9: Important enough this month to feature on the cover, there is an unnatural feel to the scenes that feature K.9 right from the off in The Fate of Krelos that puts the listener on the alert during the TARDIS scenes. It's clear that he has been tampered with in some way and John Leeson's subtle performance (how he can find subtleties in a character like K.9 is astonishing) suggests that something is wrong without the script overtly stating it. When it comes to his master, K.9 will fight any outside influences to warn his best friend. Even though he is the cleverest dog that the Doctor knows, interfacing with the TARDIS is likely to scramble his brains.

Sparkling Dialogue: 'It's as if the dead of Krelos have risen...'

Great Ideas: Check out the synopsis on the Big Finish website. Somebody was having a laugh, surely? 'In passing, the Doctor notes it could do with a good clean' - what an enticing snapshot of the story to come! Whilst I take issue with the method of which the Doctor and Leela are so rapidly brought up to speed with the fate of Krelos (we don't get to experience much of the world before it is devastated), the way the planet is depicted as thriving and then apocalyptic is potently handled (told through the Doctor and Leela's staggered reactions).

Audio Landscape: Explosions, a ship descending, flames, snoring, the old hum of the TARDIS, a biting wind, falling down the mountain, dead fish floating on the surface of lapping waves, snapping tendrils.

Isn't it Odd: Briggs loves telling his stories through action, doesn't he? Whilst there is nothing wrong with that approach this is such a tasty idea that you have to wonder if this should have been less adventure and more intelligent exploration of his very tasty ideas.

Standout Scene: There is an astonishing moment between the Doctor and Leela in the TARDIS where they argue over the situation and bring their unique perspectives to the fore. I was blown away by this scene because it is precisely the sort of tension that this range usually avoids. Tom Baker and Louise Jameson really go for it too, finally given the chance to get their teeth into something juicy and emotional.

Result: 'It is a terrible sight in the light of three moons...' I can see precisely what Nick Briggs was going for with The Fate of Krelos and to some degree he has succeeded but I think that is mostly down to his work as a director rather than a writer. There is a disquieting atmosphere to the whole piece that is world away from usual fluffiness of this fourth Doctor adventures and it genuinely feels as though it is building up to something spectacular. It isn't quite the Lucie Miller of this line but it is certainly along those lines. I love the idea of the Doctor and Leela going on holiday and causing a chain reaction of devastation because of that but I don't know if this was subtly written enough to explore the idea. The first episode is quite bluntly plotted to ensure that by the time we reach the climax we are dead certain of what the writer is trying to say. It's rather like being bonked on the head with the Doctor's mistakes rather than learning about them naturally. The concept isn't explored imaginatively or emotionally, it's simply presented to you and you are left to make up your own mind as to what you think of it all. However the atmosphere is unnervingly maintained throughout, helped no end by the curious use of K.9. What really stood out to me in this story was the very natural chemistry between Tom Baker and Louise Jameson and how so much of the story was told through the eyes of the Doctor and Leela. Over three seasons the characters and actors have developed a fine rapport and since Briggs has become intimately acquainted with both the actors and their roles the net result is a story of terrific interaction (with some surprisingly touching moments). Surprisingly dramatic and eye-opening, I hope the second half can keep up the feeling of dread: 7/10

I have one word for this one, setup setup setup! well that's three words but you know.
I liked some of the ideas on display, and I loved the idea of exploring a techno apocalypse through the vision of an old man for whom technology provides his new leace of life, sinse you know, technology isn't all cyber upgrades and deathrays (even in the real world). Actually I did think we got a nice idea of Krelos just from old Jarolk and his helper, as their interactions and their discussions of technology felt far more real than many conversations on alien planets, I also fully agree The Doctor and Leela's tention here was good to see out in the open, indeed my favourite bits of this one were all the characters.

My problem is that this hole thing felt really cursery, so much so that it almost felt like nothing was going on for much of the time, indeed the amount of times The Doctor, leela and K9 went up and down that hill made me wonder if the Doctor was taking over from the Grand old duke of york :D.
we know something bad has happened to Krelos and to k9, and that the doctor could or could not go back and change it, but rather a lot of time went into telling us that and not much else, indeed it feels a little odd to be cryticising such a short story for wasting time but largely that seemed to be what was happening, there was so much "We're setting up next week" that parts of this one felt neglected in terms of the actual plot, for all the characters were lovely, heck, I hope we find out what actually did! happen to Krelos next time sinse other than the city going boom I'm still in the dark :D.

I'm willing to reserve judgement though and see if the Cybermen can indeed live up to their buildup (K9's final "you belong to us" was most chilling), and I love the feeling of looking forward to seeing where a story is going, although with requiem for the rocket men's ending this isn't the first time this series of the 4das has managed to intreague me.

I just hope it doesn't turn out to be a damp cyber squib, sinse while there have been some great cybermen stories by Brigs others haven't exactly been operating at optimum efficiency, still it'll be fun finding out.