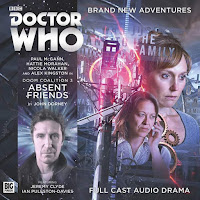 What’s it about: Earth. The late 20th century. Across the world, the mobile phone is gaining popularity as more and more people decide to join the digital age. But for the residents of a sleepy English town sitting in the shade of a new transmission mast, that ubiquity has a troubling cost. When the TARDIS veers off-course, the Doctor and his companions find themselves in the middle of a mystery. Sometimes the past comes back to haunt you. And sometimes the future does as well.

Physician, Heal Thyself: The Doctor is willing to give the TARDIS a complete overhaul but that means jettisoning his companions for a day. He goes straight for the more obvious examples of an alien presence such as strange lights in the sky and completely ignores the less fancy notion of troublesome telephone calls. The Doctor and Liv are so in sync with each other these days that I’m not entirely sure where one begins and the other ends. She’s not the most effervescent of companions for him but she does ground him a lot and the trust that they have in each other is palpable. Nothing he expect to be wrong is wrong today, which is very disconcerting. Liv is angry that the Doctor made her take the call from her dad, suggesting that he just doesn’t understand people and what they go through in his adventures. His response, that he will never understand if nobody explains it to him, is perfect. Isn’t it wonderful how the Doctor is so used to dealing with madmen with grand schemes that he automatically thinks that is going to be the case…and yet in this story things are genuinely as innocent as they seem.

Liv Chenka: Live getting the chance to speak to her dead father really shocked me because it was the point where the story makes it clear that this isn’t people who are pretending to be the dead loved ones but it is actually them. That was even more unnerving. The story doesn’t resort to screaming and shouting but one last, gentle moment between Liv and somebody she loved a great deal. It’s almost painful in its lack of melodrama. Liv was out working when her father died and she’s bitter because he was misdiagnosed. She could have done that properly and saved him. She could at least have been there with him when he died. It’s a huge regret in her life. She gets the chance to tell him that she loves him in a heart-breaking moment.

Helen Sinclair: The differences between Liv and Helen continue to stack up. Helen is delighted to be back in England but Liv states, quite bluntly, that it isn’t her world. I should have realised that something was going to be amiss when Helen disquietingly reacts to the fact that it is 35 years after her time. This isn’t the future, it’s her future. The people she knows will still be alive. The dangers of going to see her family and how they turned out 35 years after she left them are manifest. Imagine returning home after a trip in the TARDIS to discover that your very disappearance ruined the lives of those you left behind? Imagine this being the future when you discover all of this and you cannot go back and make amends because those events are now fixed in time? Poor Helen, what a devastating responsibility to have to face. When facing her brother in the future, Helen has to face up to the fact that she appeared to be guilty of her crime by the very fact that she ran away. Not a letter, not a phone call after she left…the feeling is that Helen was a criminal and she didn’t care one jot about her family or their reputation. After Helen left the family name was not exactly a desired commodity. Her brother asks the very awkward question that if she is Helen’s daughter then why hasn’t she looked up the rest of the family? To which there isn’t really an adequate answer.

Standout Performance: All three regulars are exceptional, but Nicola Walker gets her best ever moment when she screams at her father to get the medical attention he so badly needs. After she has hung up on him.

Sparkling Dialogue: ‘The 21st Century is just around the corner…and everybody has to be ready’ – a nice, sly dig at Torchwood there.

Great Ideas: To sweeten the deal of putting in an ugly new telephone mast in town, everybody is being given a spanking new, state of the art mobile phone. But with that comes a price…the dead long buried and burnt alive are calling and haunting those who have been gifted. Such a simple, but chilling idea. It’s not that the episode tries to dazzle with its emotional content, it simply presents various well played characters with the disturbing situation of having to take a call from a deceased loved one. A mother from her son. A man from his gay lover. Liv from her father. It’s all so dexterously handled and it is all the more effective because of it. You never forget losing a loved one and the idea that somebody is using that loss as some kind of weapon is horrific. The New Adventure Nightshade had a similar unsettling effect, for the same reason. The assertion that self-interest outweighs conviction is an interesting one that could be debated for a long time. From my experience of people, this is a true statement. The dead are phoning from when they were alive, somehow it is all true. A clock, attached to the workings of the mast, that is allowing people from the past to interact with those from the present. The only hint of a connection to the larger arc, but an intriguing one.

Musical Cues: A subtle score, most unlike anything I have heard in a Big Finish for a while. You cannot stamp all over a gentle character tale like this with bombast and the gentle music that plays enhanced the emotions I was always feeling. It’s much more effective because of it.

Standout Scene: The moment the phone rings and Liv realises she has the chance to save her father. My heart was in my throat.

Result: Unnerving, emotional and effective, this is a perfect character tale that enhances Helen Sinclair and Liv Chenka exponentially. I have one major problem with Absent Friends and that it is that it has very little to do with the Doom Coalition arc that it takes place alongside. Since this is one of the best stories yet, that is a bit of a problem with the overarching narrative but it is not a problem for Absent Friends, which stands proud and alone. The first two thirds are almost overly simplistic in plot terms and we actually don’t learn an incredible amount more than is revealed in the pre-titles sequence. But it is packed to the gills with useful character development for Helen and re-affirmation at just how effective the Doctor/Liv partnership is. The last 20 minutes is where all the gold lies though, a triple whammy of emotional scenes for each of the regulars. Helen facing her brothers anger is the most obvious but still the rawest scene, Liv’s phone call comes right out of the blue and winded me and the Doctor facing up to his voice from the past is kept agonisingly secret until the very last second of the story. In the plot dense period of Dark Eyes and Doom Coalition, character development can be pushed to the side-lines but Absent Friends makes up for that in spades and shows just how rounded these regulars are. More than that it is an audio that doesn’t use any cheap tricks to get you close to its characters and impresses due to its delicacy. Appropriately, Paul McGann, Nicola Walker and Hattie Morahan give their most effective performances to date too. Absent Friends wont present you with dazzling science fiction but it will creep inside you and make you feel. Who ever knew that a ringing phone could be so terrifying: 10/10
Posted by Doc Oho at 00:26

That dang cliffhanger almost made me threw my phone out..

This episode is why I appreciate Doom Coalition better than Dark Eyes. DE is super intense, with super intricate arc and a story pace like a lightning bolt, I did enjoyed it, but if somebody ask me what Molly-The Master-Dalek story is, I'd have no bleeding idea. Doom Coalition let the story breath once in a while, and it helps a lot with Liv and Helen's characterisation.

Weirdly, I'm not actually saying one is better than the other — it's like Dark Eyes is needed as a distraction and a kick to get Eighth Doctor back again after Lucie's death, and Doom Coalition is when he get his footing again (well, calm before the (oncoming) storm).

Just listened to this again after several years. It's definitely a 10/10.