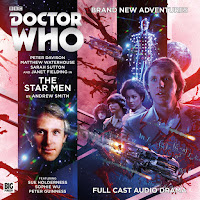 What’s it about: Astronomical navigation is a tricky business. To help Adric with his studies, the Doctor sets course for Gallius Ultima – a planet on the edge of the Milky Way, housing one of the most impressive observatories ever constructed. But the TARDIS arrives to find Gallius U in a state of emergency, tracking the return of the Explorer-class ship Johannes Kepler from its mission into the heart of the mysterious Large Magellanic Cloud. A mission that met with disaster… To find out what overtook the crew of the Johannes Kepler, the Doctor and his companions must journey into the heart of the Cloud… and beyond, into the darkness of another reality altogether. The universe of the Star Men.

An English Gentleman: It feels very season 19 to have a token scene in the TARDIS stressing the domesticity of the crew before jumping straight into the plot as soon as they materialise. He hopes that one of these days that his three wayward companions will listen to him. The Doctor is so much more commanding now that Peter Davison is an older man, he has a natural gravity about him that was lacking in that squeaky voiced young man that piloted the TARDIS in the eighties. And I mean that as a real compliment.

Maths Nerd: Adric is attempting to learn how to fly the TARDIS but as it stands he has killed all aboard in every simulation to date. His mathematical excellence is really being utilised in a dramatic way, exactly the same sort of way he failed to engage in his TV stories. That is one of the joys of Big Finish, taking hold of these characters and using them in a more effective way than they were on screen. I guess that is the power of hindsight for you. Also, Smith is Adric’s creator so he has some authority on the subject. Waterhouse is a lot more comfortable reprising the role too, less of that floaty sing-song voice now and using more of his natural voice. He’s not so much pretending to be young but bringing to life an essence of the character. He’s had some heavy exposure to voice work with Big Finish of late, what with his involvement in Dark Shadows and has had a chance to hone his voice skills. He doesn’t want safe, he wants excitement. Adric gets something of a romance with Autumn but he awkwardly doesn’t seem to know what to do with her, except try and be brave around her. He proves himself to be quite the mental challenge, where other Doctor Who companions might have been taken over by the Star Men, Adric recites prime numbers to concentrate his mind and make a barrier. He knows the discipline of numbers and their power. At the climax, Adric is distracted by his feelings for Autumn, proving that he has a heart beating underneath all that cold maths after all.

Mouth on Legs: Tegan tries to have her customary whinge that she hasn’t made it to Heathrow yet but the Doctor quickly stops her in her tracks and informs her he is trying to broaden the horizons of her knowledge. About damn time.

Alien Orphan: Nyssa is very complimentary of Adric throughout this story, but there is no sense that she is attracted to him in any way. I’m pleased they didn’t go down that route because there wasn’t even a hint of romance between them on screen.

Sparkling Dialogue: ‘This is a planet at the edge of the galaxy. It draws all sorts; the scientific, the spiritual, the adventurous and the curious.’

Great Ideas: A research station housing one of the most impressive astronomical observatories ever built is situated on Gallius Ultima. This is the point where humanity is contained within one system but before long they will start to spread. One month ago, the explorer class ship Johanas-Keplar left Gallius U to the large Magallenic Cloud charged with an important mission, which confirms this is a crucial time for humanities development. Now returned, it is clear that the ship has come under attack. Isn’t it marvellous how Andrew Smith drops you along with the TARDIS crew straight into an intriguing science fiction mystery with such economy. He skips over the launch of the ship and its overdue return and leaps straight to the moment it is first sighted, damaged, building a level of foreboding. Especially since the Doctor has already stated how crucial this time is to the future of the human race. The Keplar is deserted, lifeless and it’s heading towards the outpost at the speed of light. Something is interfering with the established timeline, according to the Doctor history records the first flight as a complete success. The end of episode one is very nicely achieved, not a moment of false jeopardy (as season 19 was infamous for) but the Doctor and Tegan heading off into the promise of possible danger. The bodies of Keplar crew have been taken over. The Tarantula Nebula is full of new stars, intense radiation and stellar winds, which is where the Star Men come from. They use the red cloud to envelop ships, to penetrate and smother the crew. The Star Men are new to this universe, altering human history as they are about to expand across the cosmos. They are not aggressors by choice, but the last of their energy in their universe is being depleted and they need a new source from this universe. Several new-born stars in the Tarantula Nebula helped to rip a hole between the Star Men’s universe and this one.

Audio Landscape: Walking on the surface of the gravelly surface of the planet, boots, sticking the floor of the Keplar, a medical laser, splitting coral, the coral spreading,

Isn’t it Odd: Beings from another universe (handled better in Cortex Fire later in the year). Another universe where the energy is depleting. Going from one reality to another to plunder. An enslaved species mining riches for their masters. Ships going missing. This story is literally built out of science fiction clichés.

Result: The Star Men gets off to a flying start with a riveting first episode, one that gets to the heart of a gripping mystery with real economy. Classic Who was always good at grabbing your interest in its opening episode but this is a particularly first-class example of how it should be done. I’m trying to put my finger on what it is that makes Barnaby Edwards direction a cut above everybody else. When I listen to a story he has directed I am almost always bound to enjoy it, even if the script is lacking because he weaves some kind of audio magic around it that makes it so engaging. He reminds me of Graeme Harper from the new series; he drives the best performances out of people, strong, energetic ones and there is always a feeling that the whole piece has been crafted by a master, each element (music, soundscape) painstakingly considered to create an overall effect. He directed The Chimes of Midnight and Dr Who and the Pirates, The Eleventh Tiger and Son of the Dragon, The Eternal Summer and Death in Blackpool. He’s quite my favourite Big Finish director and his work on the first episode cannot be understated, the pace of it means the performances have to be bang on and he has cast the story expertly. I’ve come to expect clinical science fiction from Andrew Smith these days and he doesn’t disappoint with The Star Men. It’s not the most innovative of stories but it does present some old ideas in a direct way. Like evolution in Full Circle and cloning in The First Sontarans, these concepts have been explored before but Smith has a way of bringing science to life. He’s certainly better at it than Bidmead, especially on audio. Episodes two-four aren’t are nowhere near as strong, they feel much more humdrum than the opening instalment but my interest was maintained by the execution. Other highlights were Peter Davison’s performance, which is typically strong and the characterisation of Adric, and I never thought that would be the main strength of a story. After episode one it feels as though The Star Men should have been a better story than it turns out to be, but it is still above average and entertaining: 6/10
Posted by Doc Oho at 15:50

If you need your ex-girlfriend or ex-boyfriend to come crawling back to you on their knees (no matter why you broke up) you need to watch this video
right away...

(VIDEO) Get your ex back with TEXT messages?