The Behemoth written by Marc Platt and directed by Jamie Anderson 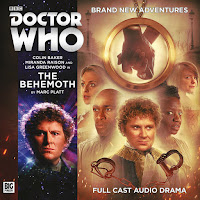 What’s it about: Bath, 1756 – and a very dashing gentleman known only as the Doctor is newly arrived in town, accompanied by his lady friends Mrs Clarke and Mrs Ramon. He’s created a stir among the gentlefolk of Georgian high society – and a stir in the heart of merry widow Mrs Theodosia Middlemint, rumour has it. They are not the only strangers from abroad causing tongues to wag, however. The mysterious Lady Clara, come from Amsterdam in the company of the noble Captain Van Der Meer, has the whole of Bath agog. Who is she, really? What is she, really? But there’s something terrible beneath the veneer of Georgian gentility. As awful a horror as the Doctor has ever exposed, hidden inside Balsam’s Brassworks. Something that needs to be brought to light, for the sake of all humanity.

Softer Six: How wonderful that this mismatched team should be the most successful and anticipated of the Big Finish main range; a bombastic and colourful Time Lord, a stalwart and sensible WREN and a street wise cockney fresh from her wedding. There’s something extremely charming about the clash of personalities that is in play here, it’s a three-time culture clash that yields entertaining and engaging results. It’s nice to have Sixie at the top of the pecking order again after some time cruising the main range. He’s mistaken for Mrs Clarke’s footman with ideas above his station…and with a coat like a detonation in a woman’s wardrobe! He once danced a cotillion with Jane Austen, don’t you know. She was a very nifty mover. As you can see on the cover the Doctor has abandoned his hideous coat and is decked out in finery from the period. He manages to charm the local hob nobs and is quite graceful on the dance floor. A veritable parapet of invention, he performs a trick with a roast chicken that quite brings the house down. The Doctor takes hot chocolate with a lady, much like the first Doctor did with Cameca in The Aztecs. Since this is a similarly paced historical with dark undertones, it feels very apt. Life, even amongst friends can be a lonely business so he keeps busy to distract himself from that. He’s crestfallen because he can’t even enjoy one day off. Sarah being protected by the Doctor rather than owned by Balsam is a very important distinction, suddenly she is an individual seeking shelter rather than property running away. Can you imagine a Doctor more suited to damning the black slave trade? When he gets the chance to do so Colin Baker lets rip in the finest sixth Doctor defiance. I loved his shoulder shrugging reaction to Craven going overboard.

Constant Companion: Constance got married during wartime so it was in uniform with a bunch of wilting daffodils. Balsam calls her charming and thoughtful, which just about sums her up. She has enough of a modium of decorum not to want to get into a swimming bath with fully dressed people. Travel has opened her eyes. Constance’s father has land in Africa where he employs the local people, but as servants rather than slaves. She tries to convince Sarah that she is not property, that nobody belongs to anybody but themselves. She’s appalled that women are treated as property as much as the slaves. This is the second story on the trot where Constance has talked about leaving the Doctor. I hope she doesn’t too soon, they’ve touched upon something rather special here.

Flippin’ Heck: The Doctor despairs at Flip thinking that chlorine was invented. There’s a subtle gag that plays out where nobody can pronounce Flip’s foreign surname, much in keeping with the theme of the play. Flip’s affection towards Clara is palpable, underneath all those streets smarts she’s a big softy really. In reality the offer that Craven makes her to become the mistress of a plantation in Jamaica is a better life than anything Jared can offer her in her own time but she is true to herself and refuses to be seduced. Her reaction to his proposal is to kick him in the nuts and given the manner in which he has spoken to her and treated Clara, that is an understatement.

Standout Performance: Balsam is a truly loathsome character, brought to life with relish by Glyn Sweet.

Sparkling Dialogue: ‘The owner said the lady had to pay the bill’ ‘Oh, Doctor’ That really made me chuckle.
‘England should be ashamed. You belong in the same pit as all the other Fascists and Nazis of the Universe - everything I’ve fought against. And one day your filthy trade will be swept away!’
‘Human beings traded for pots and pans and weapons. Surely one of this world’s worst abominations.’

Great Ideas: The way this story tackles racism is very well done because the first episode plays out very like your typical Doctor Who meets the gentry (think Black Orchid) with the colourful and pampered upper classes taking a shine to the Doctor. The subtly dark undertones of racism are there from the beginning, a dismissal, a threat. It’s laced into what would otherwise be a genteel tale, giving it much more depth. You can trust the clergy to get to the heart of the matter; those of black stock are just treated as chattel, a possession, something to be bought and sold. I loved the gag of Lady Clara being a rhino. In a delightful moment it appears that the Doctor and Mrs Middlemint are indulging in a bit of rumpy pumpy when in fact it is revealed they are only playing cards. Mrs Middlemint’s tragedy is that she is just as trapped as Sarah, and that she accepts her fate just as easily. It’s brought home in a scene where Flip tries to point out that things can be different and she refuses to listen. I would LOVE to see the Doctor and Flip pushing a rhino inside the TARDIS. How delightful.

Audio Landscape: A horse whinnying, carriage clipping along a path, birds chirruping, a pug barking, the Doctor jumping into a pool, applause, the growl of a rhino, a clucking chicken, bells ringing, a packed tavern, seagulls crying, the chink of chains.

Musical Cues: I’m noticing a pleasing trend with the music of late that the scores are less wallpapered action soundtracks but instead more appropriate, subtle affairs. This is the rarest of things, a pure historical, and the music truly steps up to make this an occasion.

Isn’t it Odd: There’s an eleventh-hour action sequence that only served to remind me just how atypical this adventure had been in that respect. Bravo.

Standout Scene: There’s a glorious moment where Constance and Flip discuss how they feel about the Doctor going on a date. It’s everything I could have hoped for from this pair. There’s also a beautifully written scene set in the TARDIS where the slave trade is brought home to a very personal level by Sarah and condemned by the Doctor. He admits that he is powerless to stop it and that he is even part of the system that allows it to happen, purchasing hot chocolate earlier that day.

Result: ‘The slave trade is England’s dark heart…’ Time for something completely different and what a refreshing change of pace it turns out to be. The Behemoth is the rarest of things, a pure historical and one that is happy to build an atmosphere and let the characters take some of the weight rather than simply assaulting us with plot. Like The Waters of Amsterdam, Jamie Anderson is particularly adept at bringing these character driven tales to life and he does a masterful job here. The story felt unhurried but never slovenly, appropriately dramatic in parts and with plenty of scenes where the actors can prove their worth. Marc Platt throws a harsh light on the ugly truth of the slave trade, taking it as far as you can go in a Doctor Who story. I was impressed with how he handled the theme, the story kicking off light and breezy and get steadily more uncomfortable as we get closer to the characters who have been torn from their homes and treated as wretched property. I love the idea of a Doctor Who story that places it’s drama on the wellbeing of a rhinoceros and the tragedy of lovers torn apart by Western greed. On a purely superficial level it is very invigorating to hear some more exotic accents in a Doctor Who audio. I’m a big fan of Marc Platt’s work stretching right back to Ghost Light, through the original novels and finally celebrating his prolific audio stories. He’s a writer that has the occasional off day but when he is on form it is a synthesis of beautiful dialogue, strong characterisation and fantastic ideas. This is a step away from what I have come to expect from him, creative science fiction, and instead he has chosen to build a setting, a small group of characters and tackle a tricky but very worthy theme. Colour me impressed, it’s a combination that suits him very well. What’s more it’s a great showing for the Doctor, Flip and Constance. Anybody who was impressed with their merging in Quicksilver most certainly will not feel short changed. I can’t think of the last time I let a Big Finish tale play out quite so effortlessly: 9/10
Posted by Doc Oho at 04:35