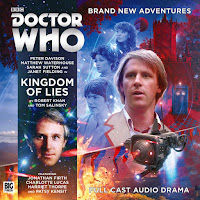 What’s it about: On the planet Cicero Prime, the kingdom of Cardenas is divided, with the whole population forced to swear allegiance to either the effete Duke or the fiery, hard-edged Duchess. This is a situation both parties have grown tired of. What use is half a kingdom when, thanks to a carefully engineered murder, you could have it all? Surely, neither of them would be rash enough to summon the deadly off-world assassin The Scorpion to help with their problem? And surely, this terrifying figure wouldn’t arrive wearing a long cream coat and striped trousers…?

An English Gentleman: In a mistaken identity plot of almost Shakespearean design, the Doctor is erroneously taken for the legendary assassin the Scorpion and has to play along as though he is there by murderous design. That this should happen to the most ingratiating of Doctors is really funny. It’s a pleasing turnabout from the Doctor’s situation in The Romans, where he was mistaken for a hired assassin but wasn’t aware of it until it was far too late. There’s also a pleasing element of The Myth Makers, which sees the Doctor and his companions working for opposing sides of a conflict, in effect working against one another. They do say the old stories are the best. He’s described as a wolf in sheep’s clothing because he really doesn’t give off the air of an assassin. Fast forward to Resurrection of the Daleks and he truly lives up to that description. He’s described as being the man who would do anything to prevent himself from taking a life. When it comes to it when the Doctor has to play his part as a pacifist, he’s very convincing, but he’s more than happy to pull the trigger when he has a fiendish plan up his sleeve. I love how he plays into his character in order to fool the Scorpion that he wouldn’t take her life.

Maths Nerd: Adric, always quick to learn who is in charge and to take their side (often if that means appearing to oppose the Doctor), slimily realises he is in the stronghold of the Duchess and swears allegiance. He’s a slippery one. A willing martyr indeed, or at least a role he plays very well. He thinks getting arrested is an extremely annoying habit of the Doctor’s.

Alien Orphan: ‘He kills for money – I murder because I like it!’ Make way for Nyssa the Destroyer, famed apprentice of the Scorpion. To say this was an unexpected turn of events would be an understatement. Her grandiose turn as this malignant novitiate gives Sarah Sutton the chance to get her tongue around some delightfully improvisonal (for Nyssa) and hyperbolic dialogue. When being handed a rifle and told to shoot Adric, I’m not sure how Nyssa managed to resist.

Mouth on Legs: ‘The loud, annoying one…’ Tegan considers the TARDIS a clapped-out piece of junk that the Doctor has no idea how to operate. The problem is…she’s not entirely wrong. If there’s one thing she’s learnt about flying this bucket of bolts (you only did it once, madam, let’s not exaggerate) its that a swift punch usually kicks the navigation system in gear and where it needs to be. She does like to compare the TARDIS with a 747, an entirely fruitless affair given their relative sophistication. Only Tegan would be gobby to a defensive drone and suffer a couple of bolts flung her way for her trouble. When somebody finally has the guts to ask if she enjoys travelling with the Doctor she initially responds no, then yes, then that it does have its compensations. I wish somebody had asked that on screen. She’s very quick to point out that she and Adric don’t travel the universe ‘like that’, dismissing any idea of hanky panky between them. The very idea. Tegan is the least served regular overall and that is a shame because she’s by far the most likeable and funny these days, as exemplified when she grabs a piece of masonry and clouts the toughest assassin in the galaxy with it. I love her reckless abandon and tough commentary, the two things I hated about her on the telly. Now they are directed through humour, which serves the character so much better than angst.

Standout Performance: Unbelievable that Big Finish should secure the services of Patsy Kensit and only make use of her for one episode. Is this going to be a recurring character? In an impressive guest cast she is the most prominent ‘name’, even if her character ultimately doesn’t inspire much confidence as the assassin that everybody has been expecting. She wasn’t exactly the most threatening of characters, even if she does live up to exactly the kind Liza Goddardish style assassin of the kind I would expect in the early eighties. All massive hair, overdone make up and over stressed threats.

Sparkling Dialogue: ‘I’ve left a trail of stinking corpses behind me!’ would be an appalling line if it was coming out of anyone’s mouth other than Nyssa, wherein it becomes hilarious. This is the sort of line that Matthew J Elliot would include in his scripts in deadly earnest.
‘We persuaded the Duchess that we were assassins and that we would assassinate her assassins before those assassins struck!’

Great Ideas: I liked the very quick character shorthand deployed that reveals that the marriage that divided the kingdom of Cardenas is loveless through both participants arguing that they are the focus of the crowd’s cheer. It’s the ultimate expression of a marriage that has failed, a painted line that bisects the kingdom in two and which side you support determines which side of the line you inhabit. The Duke and Duchess name their horses after each other, The Cunning Little Vixen and Dead Man Walking, suggesting just how much love is lost between this pair.

Musical Cues: Andy Hardwick scores The Kingdom of Lies and it is a perfectly good score, if you play the music suite track in isolation you can hear this is the work of a fine musician. However, Hardwick has been scoring Doctor Who audios since the days of Zagreus and I have lost track of how many stories have been heightened by his musical stirrings. My problem is that the music isn’t really that different from what he was delivering in Zagreus, epic sweeps and subtle emotion underscoring. I can kind of predict what he is going to do with the score and that means it lacks a freshness. Unlike a composer like Jamie Robertson, Hardwick’s music just isn’t chameleonic depending on the material.

Isn’t it Odd: ‘You’re listening to a Big Finish adventure…’ says Nick Briggs in that ominous tone of his at the beginning of the story before the first scene fades in…was there any doubt that we were that made such an innovation necessary after 234 main range releases? The resolution to the first (pretty decent) cliff-hanger is so blasé that you have to wonder why the Doctor reacted so dramatically to the situation in the first place.

Standout Scene: In a wonderful moment of dramatic understatement, the Doctor attempts to prevent a war by suggesting the royal couple try counselling. Davison’s delivery of his ‘third person in this marriage’ speech is so arch it’s the funniest he has been, well, since Time in Office. The fifth Doctor really is getting the most charming material of late. ‘Oh, I give up!’ The Ainleyish anagram is fiendishly good, a twist that I never saw coming a mile off.

Result: A delightful set up involving the Doctor and Nyssa opposing Adric and Tegan in a conflict to assassinate their captors spouse, The Kingdom of Lies emerges as an amusing and winning tale of (unrequited) love and (domestic) war. Adric, Tegan and Nyssa are turning out to be a fantastic combination on audio, really raising the entertainment levels of the stories that they feature in. They are forced into roles they are unaccustomed to and the plot keeps on pivoting on their improvised attempts to keep up appearances. Khan and Salinsky’s script is extremely theatrical and the performances of the guest cast react to that with Jonathan Firth and Charlotte Lucas in particular delivering heightened, but diverting, turns as the Duke and Duchess. You might notice a few less than subtle nods to Charles and Di along the way, but then Doctor Who has never been shy of the odd political dig in it’s long history and it adds a subtle extra layer to the story that is playing out. It’s an entire kingdom that is boiled down to a few characters and so the scale of the adventure is quite modest and I didn’t get a true sense of important details that might have made this planet one of the memorable ones that the Doctor has visited. But when you have characters behaving in such a calculating and deliciously fraudulent manner what matters minutia? How does the Doctor give the illusion of assassinating his employers rival without actually getting blood on his hands? Will the Order of Alzarius come up trumps with a stratagem to wipe out the devilish Duke? Sarah Sutton gets the opportunity to do something very different as Nyssa adopts a ruthless guise, still offering up surprises after featuring in a prolific number of stories. Had something else been dropped from the schedule then this would have been the Christmas adventure (instead of the most bone chilling release in years featuring a companion death) and given its frantic pace, witty dialogue and whimsical tone it might well have suited that spot. If the story drops the ball a little in the last episode with the appearance of a much vaunted but disappointing assassin, the tying up of the plot elements is satisfactory, with an unexpected twist a sly dig at 80s Doctor Who. After a string of disappointing seventh Doctor releases and three dark themed sixth Doctor stories, it’s down to the fifth Doctor to pick up the mantle of most entertaining stories again in the wake of Time in Office. The Kingdom of Lies won’t win any prizes for novelty, but it’s exceptionally well made (Edwards directs brilliantly, as ever) and acted and it could just put a smile on your face. Given plenty of Doctor Who stories have the reverse effect, surely that is something to cherish: 8/10
Posted by Doc Oho at 01:34

Adric and Tegen almost ruined this for me. I hate them both. At least Adric is logical in his cringy obsequience but Tegen ... How can Janet Fielding stand to play her? She is almost completely unlikable in every way. It's a testement to the script and Davison's skill, as well as the rest if the brillant cast, that this silly story is as rip roaringly enjoyable as it is.