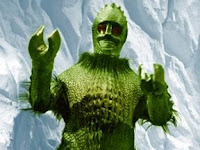 What’s it about? Ares One: NASA’s first manned mission to the dead planet Mars. But is Mars as dead as it seems? While the NASA team investigate an ‘anomaly’ on the planet’s surface, the Doctor and Peri find themselves inside a strange alien building. What is its purpose? And what is froze inside the blocks of ice that guards the doorways? If the Doctor has a sense of déjà-vu, it’s because he’s about to meet some old adversaries, as well as some new ones…

English Gentleman: Whilst Peter Davison gives a typically excellent performance I didn’t really feel much for his character, for good or for ill, throughout this production. He is damnably curious, doesn’t feel the cold and is extremely protective of Peri. His proven to be honourable by being able to open the Ice Warriors tomb. He forms a strong relationship with Zzaal, revealing to him why the Ice Warriors left Mars and the Ice Lord even sacrifices his life for him at the stories conclusion.

American Attitude: Justin Richards states that Gary Russell specifically wanted a strong role for Peri in this story so he splits the two of them up and lets Peri get to be wonderfully headstrong when dealing with dreary villain Paul Webster. She remembers her chemistry classes, moans an awful lot (nothing unusual there then…I will go on to prefer the Peri who delights in her adventures) and gets straight to the heart of the problem, exposing Paul in the first episode! She proves herself to be calm under pressure and able to ask the right questions when she is stranded in space on Ares One. Nicola Bryant gives another committed performance and it sounds like she has never been away. I’m not sure if she is always 100% convincing as Peri but her enthusiasm for the role is quite infectious that makes her rather magnificent all the same. Richards is turning into something of a Peri expert after Whispers, Grave Matter and this!

Great Ideas: Rather than simply shoehorning her into the plot for no apparent reason, Peter Davison’s daughter (who would go on to play the Doctor’s daughter) is given a strong role in Tanya. Believing she is a Webster and thus securing the legacy for her family she soon discovers she was infected with Martian DNA after the last trip to Mars and was brought along to sniff out more goodies that will make Webster incorporated an important factor in the arms race.
Everything surrounding the Red Dawn itself including epic walks across the surface of Mars and the noble self sacrifice of Zzaal under the brilliant sunlight of Mars. As an explanation as to why the Ice Warriors left Mars, sunburn as good as any!

Standout Performance: Nicola Bryant. Rarely given the kudos she deserves, she approaches the less than stellar material in Red Dawn with real gusto and proves Peri to be the best thing about it.

Sparkling Dialogue: ‘There is dignity in forgiveness just as it is noble to exact revenge.’

Audio landscape: Again a science fiction story that doesn’t have half the you-are-there feel of the Earth based ones. The only things that really stood out for me are the intercom helmets, the violent dust storms on Mars and the authentic sounding sonic canon.

Musical Cues: Finally I can lavish some praise on this story! Russell Stone proves to be a great find, easily as strong as Alistair Lock and providing some unforgettable music over his few years as composer. Red Dawn sees him as an enthusiastic newcomer, throwing everything he can at the listener with a bona fide 80’s score that mixes disco and atmosphere to incredible effect. To be honest I spent more time hum away to the music than I did listening to the events of this story! The opening of the story, the launch of Ares One has some magnificent music helping to create the illusion of the ascent of the craft. The music comes into its own in the three cliffhangers, in turns bombastic (the Warriors breaking from their tombs), exciting (Ares One being hijacked) and dramatic (Webster pointing a gun at the Doctor). The last track, Webster’s Gamble, is one of my favourites in any Big Finish story. I can still remember buying the Music from the New Audio Adventures and listening to this score over and over. Great stuff.

Isn’t that Odd: That Justin Richards, plot master extraordinaire has forgotten to include one! Rather like Ambassadors of Death he gets bogged down in lots of astronaut jargon and forgets that we’d like to be entertained as well, things like characterisation and a good narrative. I understand that Richards and Russell wanted to make this a genuine NASA story but everything is a little too talky and dull – the entire can be summed up in ‘Ares One lands on Mars, they wake the Ice Warriors up, noble sacrifice, they go home.’

Stephen Fewell is obviously the great bastard of the universe Jason Kane so it was very odd to hear him playing a real villain in this piece. Fewell is usually bafflingly sexy on the ear (it’s not really a sexy voice but Jason is pretty hard to resist…as Benny will attest to!) but his turn here as Paul Webster is dreary. He’s so obviously the bad guy and it’s obvious he will be stopped. I understand that Big Finish want to fill in the gaps that the TV series neglected (the next story is a great example) but to offer the fifth Doctor and Peri a wealth of adventures does rather blunt the effect of Caves of Androzani where the Doctor supposedly sacrifices himself for somebody he hardly knows. It reminds me of the time Stephen Cole wrote Ten Little Aliens, a superb Past Doctor Adventure but fitted it into a gap between TV stories that couldn’t possibly exist. Do we then consider these stories canon…or just enjoy the stories for what they are and forget about the TV series. Yeah, I think that’s best. Some gaps (such as Sixie and Peri and the 7th Doctor and Ace can explained by the apparent gap between Revelation and Trial and the post Survival adventures). Besides which the fifth Doctor, Peri and Erimem are such an intoxicating brew I can’t find myself objecting too much! As a huge fan of Star Trek (well DS9 to be precise, one of the few shows that demonstrates Doctor Who’s diversity of storytelling) it annoyed me to have the Ice Warriors turned into a parody of the Klingons (or Worf in particular) always banging on about honour every two minutes. Oddly they seem more concerned for their honour than their safety…and if they can’t rescue Sstast they would rather kill him to protect his honour!


Standout Moment: All of the cliff-hangers thanks to Stone’s incredible music. It is the cliffhangers that make this story, providing moments of excitement that are otherwise absent. The Ice Warriors breaking free of their tomb would have made a fine visual and the desperation in the Doctor’s voice when the Ice Warriors train their sonic canon on Ares One with Peri inside almost made me wake up!

Result: Considering its subject (a manned mission to Mars wakes up the Ice Warriors) this is one of the most uneventful and unhurried audios yet. With their great rasping voices you would think that the Ice Warriors would make an excellent audio monster but you have to give the something interesting to do make that work and here they merely strut about questioning everybody’s honour and getting captured. Big woo. The fifth Doctor and Peri make an engaging pair but are separated for most of the story so I’m yet to be convinced that stabbing continuity in the gut was worthwhile. Gary Russell needs to find a way to make these science fiction tales as dynamic and pleasing on the ear as the earthbound adventures; Red Dawn has a pretty unimpressive sound design and is only enlivened by its fantastic music. Not very fun to listen to: 4/10 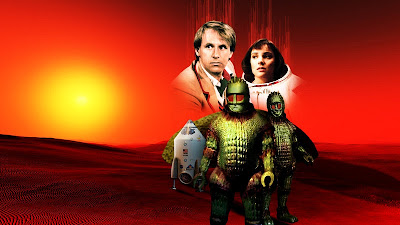