Invaders from Mars written and directed by Mark Gatiss 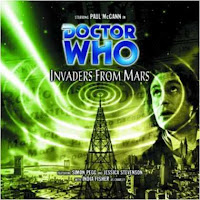 What’s it about: Hallowe'en 1938. A year after a mysterious meteorite lit up the skies of New York state, Martian invaders laid waste to the nation. At least, according to soon-to-be infamous Orson Welles they did. But what if some of the panicked listeners to the legendary War of the Worlds broadcast weren't just imagining things? Attempting to deliver Charley to her rendezvous in Singapore 1930, the Doctor overshoots a little, arriving in Manhattan just in time to find a dead private detective. Indulging his gumshoe fantasies, the Doctor is soon embroiled in the hunt for a missing Russian scientist whilst Charley finds herself at the mercy of a very dubious Fifth Columnist. With some genuinely out of this world 'merchandise' at stake, the TARDIS crew are forced into an alliance with a sultry dame called Glory Bee, Orson Welles himself and a mobster with half a nose known as 'The Phantom'. And slowly but surely, something is drawing plans against them. Just not very good ones...

Breathless Romantic: Throwing away all of the incoherent nonsense that was suggested in Minuet in Hell, Mark Gatiss kicks off the second year of the 8th Doctor’s audio adventures by writing for his character with as much zest and enthusiasm as possible. He is extraordinarily fun throughout, making it all up as he goes along and juggling up super powers and Martians with equal aplomb. The closest comparison I can think of is Tom Baker in Talons of Weng-Chiang – in that story the Doctor seems to adore the living homage he is experiencing and has a sense of glee about the whole experience, throwing out witty lines and dazzling the enemies with his fiendishness. That’s exactly the same feeling I got with the 8th Doctor and Invaders of Mars – that he loved every second of his stroll around 1930’s America.

He loves a detective story and always seems to end up helping the police with their enquiries. It is a constant mystery to the Doctor that whilst he is showing his companions the wonders of the universe they are striving to get home and return to a normal life. He has a stab at the witty film noir-ish dialogue swearing that he is an expert at the local patter but Glory Bee merely thinks he is ill. He only sleeps once in a while. Every now and then he treats himself to a complete makeover – what a great way of explaining regeneration. By episode three he is juggling the Nazis, the Russians, the CIA, gangsters and Martians and he barely breaks a sweat. Devine asks if he is a part of Victorian revival week. He is a huge fan of Orson Welles and has seen all of his movies even though they haven’t been made yet. He has the brilliant plan of using the War of the Worlds scare to scare of a genuine alien threat and wants to get in on the action so orders Charley into the TARDIS so he can grab the mike and have a go at playing the monsters trying to take over the world! 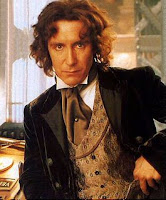 Edwardian Adventuress: Does Charley appear in this? Not really…she is kidnapped early in episode one, drugged in episode two, escapes in episode three and tails behind the Doctor in episode four. This is the Doctor’s story through and through but never mind as the next story is the ultimate Charley story.

Great Ideas: As you can imagine this is full of the imagination you would come to expect from one of the League of Gentlemen. Cosmo Devine is such a fantastic character, the life and soul of every party and the biggest crook on the planet! He uses Jimmy and Biro and murders them both afterwards. Glory Bee is revealed to be a Russian Agent and ends up falling off the Brooklyn Bridge to her watery death. The Nazis, the Soviets and the CIA all want to get their hands on the alien technology and created weapons to control the world. I love how the Martian scare of War of the Worlds is subtly squeezed into the story around all the political shenanigans going on elsewhere. It is a great use of a genuine historical event. Devine’s associates turn out to be the Nazi’s and he is a most unusual sympathiser and has visions of the Master Race with flying saucers and death rays – it is such a clichéd idea but a refreshing way of telling the same sort of story. The story really kicks off when Streath and Noriam show up – adult aliens who are as mischievous as the Slitheen when it comes to manipulating the human race and exploiting their wealth. It is basically one big protection racket where they shoot a ship full of alien eggs to different planets and let them hatch and cause the local populace to panic. After fooling them into thinking they are vulnerable they step in and look after them for a modest fee! Devine cottons on to their scheme and steps in to convince them to actually conquer the world! The Doctor sneakily arranges a second broadcast of War of the Worlds for the aliens benefit only and they scarper thinking that beefier invaders have turned up. 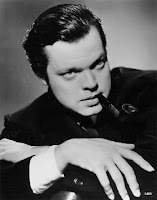 Sparkling Dialogue: This is probably Mark Gatiss’ strongest script for Doctor Who when it comes to witty dialogue – it is as sharp as a needle being dragged down your arm! Gatiss clearly adored Devine and every single syllable he utters is as gorgeous as his name.
‘I see little green men all the time! All I need is a few hours with my old friend Jack Daniels!’
‘I better get you to a darkened room’ ‘I beg your pardon?’
‘Nice equipment’ ‘I bet you say that to all the girls’
‘Listen to me you lousy faggot!’
‘What are you waiting for, Fritzy?’
‘Martians! From the planet Mars! The red one you passed on the way in…’
‘’How does it feel to betray your own planet?’ ‘A lot like betraying your own country but a teensy bit more satisfying.’
‘Err…what’s that ticking?’

Audio landscape: Good golly gosh! Gary Russell is not directing this baby! Wonders will never cease! Gatiss treats this piece like a labour of love and makes it sound as authentic as possible with lots of brilliant US accents and framing the story within a radio broadcast. Cars blast their horns in the pack American traffic, windows smash, the TARDIS grinds through the vortex and there is a fabulous 30’s style death ray effect. I loved the sequence when the Doctor opens up the second storey window and lets in the noise of the traffic, they clamber down the clattering fire escape and bullets bounce off of the walls. Welles reading War of the Worlds in episode two is very creepy. The tacky and melodramatic voices for Streath and Noriam are belly-ache funny. Insects hum in the evening air.

Music: It was a wise move to include less music as it allows you to focus much more on the performances but the dramatic stings at the end of scenes really drives home the feel of a 1930’s radio broadcast. The Doctor Who theme is worked in a few times to amusing effect. 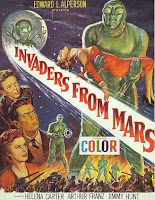 Standout Performance: What a cast! How can you choose one performance in this repertoire? John Arthur rocks on as the delightful Cosmo Devine, one of the slimiest Doctor Who villains it has been my pleasure to listen to – a homosexual Nazi sympathiser with all the wit of Noel Coward and the ruthlessness of Genghis Khan! Streath and Noriam are a very amusing pair; one is a histrionic world conqueror and the other a cataloguer in awe of what the planet has to offer. Any story with Jessica Stevenson and Simon Pegg is going to stink of quality and Don Chaney and Glory Bee allow them to have great fun with a number of accents. A small mention as well for Ian Hallard’s squeaky voiced Mouse in the first episode who meets a very unfortunate end.

Result: I am starting to wonder if I used to be a superficial youth (despite always thinking the contrary as all youths do!) as I used to find this story as boring as sin but in hindsight this is one of the better McGann audios with an infectious sense of fun and lots of marvellous and imaginative ideas. Using the real War of the Worlds Martian scare to excellent effect and giving Paul McGann to take centre stage and wow his audience, Mark Gatiss proves to be the perfect choice to kick of the second season of 8th Doctor Audios. The plotting is watertight and the characters manage to walk that fine line between realism and melodrama with Cosmo Devine taking the place as the campest Nazi sympathiser of all time. India Fisher is sidelined completely but that just makes way for some other fantastic performances and a general feeling of old school Doctor Who produced with real verve. A very strong start: 8/10 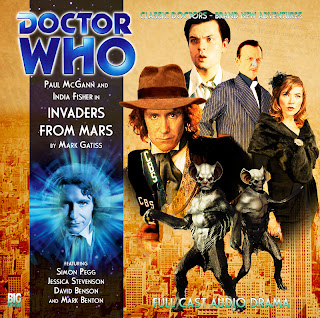 This was my favourite of the first McGann radio season, I wrote about it in my review of 2005.

Great review! I loved this episode; made me laugh out loud on the train several times. The contrast between both the writing and the "American" acting on this episode and the dismal Minuet in Hell could not be more marked. The second season is starting with a bang.

Can't wait to see how you find the rest of the McGann audios... :-)

I rarely disagree so wholeheartedly with you, but I couldn't stand this one. The last episode was the only one I found remotely enjoyable. The rest of it was dull as dishwater, dishwater with bad voice acting.