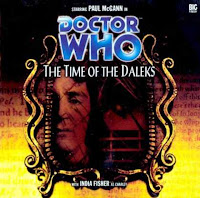 What’s it about? The Doctor has always admired the work of William Shakespeare. So he is a little surprised that Charley doesn't hold the galaxy's greatest playwright in the same esteem. In fact she's never heard of him.
Which the Doctor thinks is quite impossible. General Mariah Learman, ruling Britain after the Eurowars, is one of Shakespeare's greatest admirers, and is convinced her time machine will enable her to see the plays' original performances. Which the Doctor believes is extremely unlikely. The Daleks just want to help. They want Learman to get her time machine working. They want Charley to appreciate the first ever performance of Julius Caesar They believe that Shakespeare is the greatest playwright ever to have existed and venerate his memory. Which the Doctor knows is utterly impossible.

Breathless Romantic: The best thing I can say about the Doctor in this story is just how well he seems to fit into the mock Victorian world of clocks and time machines – he is far more at home than the 2nd Doctor was in Evil of the Daleks. He thinks Shakespeare is the most accomplished, talented and influential playwright; his prose is peerless, his sonnets sensational and his verse beguiling. But aside from keeping on the go throughout, he doesn’t really make that much of an impact.

Edwardian Adventuress: In an almost Amy-like moment of madness we realise charley doesn’t know who Shakespeare is and she thinks he is an obscure playwright. She is quite partial to cheesy pineapple things…do you see how much I am reaching here for meaningful characterisation? Charley finds the twitchy Daleks quite unnerving. She is getting quite adept at understanding paradoxes. We realise at the close of this story that Charley is emitting the time energy that made this whole story possible. She is the Eye of the Storm; time is unravelling with Charley at its centre.

Great Ideas: Time of the Daleks was never going to win merits for its quality characterisation but being a Justin Richards script it does earn a reprieve for its clever ideas. Rassilon quoting Shakespeare at the beginning of the story is a portent of the climax to the season. A time fissure has sprouted between the mid 21st century to the 16th and Shakespeare has vanished down this crack in time. Learman’s dictatorship came to pass after the Eurowars and the foundation of New Britain. The rebels are obsessed with restoring Shakespeare back to history and have standard quotes amongst themselves who know about the playwright. Learman’s time machine is 111 mirrors and 1600 clocks – since light travels to the mirror and back to the observer what it shows is an image of the past and the machine uses mirror matter which enables them to open a portal into the mirror universe – a realm where light travels at a different speed. Yeah, it didn’t make sense to me either. Heisenberg’s uncertainty principle that the very act of measuring something changes it allows them to apply that principle to time itself, a clock counting of the second’s changes time and 2000 clocks in a tiny space slaves time to a Master clock. Anything? 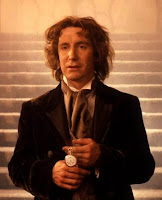 Nope, it’s all nonsense but it all sounds wonderfully romantic. A month ago the time machine worked and something came through…in a scene that mirrors Evil of the Daleks to a point beyond plagiarism, the Daleks appear at this moment. The Daleks are the most enthusiastic of Shakespearean scholars and quote Shakespeare as though it is the most natural thing in the world. The Daleks require a temporal stabiliser to repair their damaged ship and agree to help restore Shakespeare in a bargain. Viola and Charley fall into the mirror into 1572. History has been changed and the Daleks are suddenly the rulers of Earth in all time periods. As the Doctor changes time back we see the Daleks turn back into soldiers before in the mirrors. As history continually changes the rebels can’t remember if they are fighting Learman or the Daleks. Learman’s plan is revealed – she wants to kill Shakespeare and keep his amazing works for herself as only she can appreciate his genius. The mirrors show London through the ages and the Daleks are ripe to just step through and invade. When the reactor explodes and the energy is channelled into the time vortex and magnified by the exploding Dalek fleet – that is what causes the damage and gives the Daleks their chance. We get to see a Dalek thrown back into Roman times and destroyed by the Romans (explaining that weird cameo in Seasons of Fear). The Daleks have made their own version of the Eye of Harmony based on Time Lord design acquiring the knowledge from Kar-Charat (The Genocide Machine). In a brilliantly grisly moment the Daleks march Learman to her death, forcing her into a mutant with radiation and by forcing a Dalek that has failed its orders to commit suicide they put the Learman mutant inside its casing. The boy (shock horror! Not!) is revealed to be Shakespeare, Viola took him to protect him thus she was responsible for erasing his works from time. TED – the Temporal Extinction Device! The master clock was only ever good at telling the time – not as a temporal stabiliser! The story is revealed to be one great big time loop…the beginning and the end of the story are exactly the same moment – the Daleks attempting to conquer time leads them to escape the time corridor which leads them to attempt to conquer time…

Great Lines: ‘We will await rescue!’
‘It’s not like these Daleks are going around killing anyone?’ ‘I know and that’s what worries me most.’
‘We are the Masters of Time!’
‘It’s a strange partnership where they do all the work and we get all the reward.’
‘Think of pure evil made malignant flesh.’

Standout Performance: She’s not the most memorable of villains as her motivations are all over the place and (frankly) unrealistic but Dot Smith brings certain gravity to the role of Learman regardless.

Audio Landscape: Ticking clocks pervade this story; the Dalek heartbeat still gives me a fanboy thrill and they use the Cushing Dalek control room hum as well. There is a horrendous intercom jingle, a ticking time machine, Daleks on a hunting rampage, dogs barking and birds singing. I loved how Briggs realised Charley and Viola banging on the mirror desperate to come through. There is a brilliant sequence where history is reset and Dalek monotones melt into soldier’s voices. Learman being mutated is as disgusting as you can imagine and her gurgling Dalek mutant is yuck. 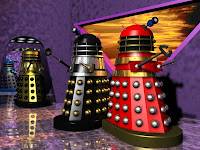 Musical Cues: There is some sweeping dramatic music over the opening scenes. I love the Dalek piano sting which always pre-empts their arrival. I love the use of cymbals in the later scenes when the rebels plan their attack.

Result: Every now and again Justin Richard throws every idea he has into the pot and mixes it up and sees how it goes down. Time Zero and Sometime Never…have a similar cold and intelligent feel as Time and the Daleks but the complicated plotting and wealth of ideas are a lot easier to digest on paper where you have time to understand them rather than on audio which charges on even when you are still trying fathom out what happened in episode one! I think there is far too much cleverness and not enough characterisation happening in this story and it is to the credit of the director that it still manages to be vaguely entertaining even when its utterly incomprehensible. The Doctor and Charley are utterly wasted and none of the guest characters really shine…the best thing you can say about this story is that it is delicious to have the Daleks quoting Shakespeare. Although I am a huge fan of Shakespeare I don’t think this scenario is even remotely feasible, he is given a gravity and level of importance that is clearly the writer’s feelings rather than something that comes naturally from the storytelling. When the Doctor gushes about the playwright, he is merely a Mary Sue for Richards: 4/10 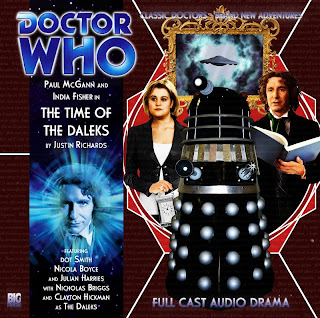 Okay, most fans will disagree - but I think The Time of the Daleks is MAGNIFICENT. I find it comforting, absorbing, entertaining, and just bloody wonderful!It needs at least a couple of listens, and I've heard it a dozen times, always enjoying it. ~Nev Walker, New Zealand

Honestly I enjoyed a lot the first two parts, but could comprehend very little of part three. My English isn't so well and with all that noice, explosions and everything I could hardly concentrate.
The last parte was...strange. I felt unattached to this. It's quite sad, because I really liked the first two parts.

The setup was appealing, but the follow through was predictable and, as you say, there's very little characterization going on. The story relies on us caring about this because of the premise, saving the works of Shakespeare and defeating the Daleks, but the story's not there.