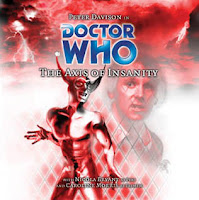 (It is at this point that I must complain that Gary Russell has directed the last ten stories and will continue to direct the next few. Whilst I find his direction is generally very good, it does seem to match the quality of the scripts he is directing so with Zagreus, Creed of the Kromon and The Twilight Kingdom he may as well not have bothered! This is going beyond vainglorious now and I genuinely think that some other directors deserve a look in. It might simply be that he was the only director available but that seems highly unlikely. I want to listen to a Barnaby Edwards or a Nick Briggs directed story. Rant over.)

An English Gentleman: I am so pleased to hear Peter Davison back in the role after his longest gap away yet. It feels ages since he tickled my fancies on Omega and I can’t tell you how nice it is to listen to an actor who seems to give a damn about the part. What’s more he gets to have great fun playing the Jester, Davison really matches Garrick Hagon’s tone and inflection and has a real laugh fobbing off Erimem. Whilst this story doesn’t probe his character as much as others do it says rather a lot about the Time Lords themselves for which the Doctor seems genuinely apologetic about. The whole concept of the Axis as a Time Lord scrap yard causes Peri to leap at him and demand answers about their nipping and tucking of the timelines. He proves himself a true Time Lord, willing to sacrifice his life to serve Time and ensure that it is not threatened. With their responsibility also comes pomposity and arrogance it seems! He comments that Time Lords are just one step ahead of the Reaper. Because of his responsibilities he cannot have long term relationships or roots – the fifth Doctor mentions this proudly – can you imagine if this had been the self-deprecating eighth Doctor. We’d all be grabbing for our violins! He tells Peri and Erimem he likes having them around because they don’t allow him to get too maudlin but he ensures them he’ll get over his complimentary streak pretty soon.

American (with) Attitude: The characterisation seems a bit off in the first couple of episodes but she levels out in the second half. Nicola Bryant has always played Peri with earnest enthusiasm (making up for her characters pessimism on the telly) but here she comes across a bit too eagerly. At points in the first episode she is irritating and immature, prodding at the Doctor’s embarrassment about the Time Lords until he dumps them in the TARDIS. Peri is teaching Erimem how to read and the pair of them seems to have developed a affectionately bitchy attitude towards each other which really makes them sound like sisters. Peri seems to Erimem’s keeper, bossing her around and being the season time traveller she seems to be the one to make all the decisions. She’s not out to make any trumpeting gender statements but in a true symbol of women’s lib she grabs a crowbar and threatens to smash Jarra’s skull in! 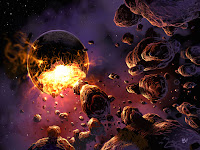 Dusky Babe: Another great Erimem story which sees her step into the limelight and enjoy all the scenes with the villain of the piece. Caroline Morris continues to impress as the former Pharaoh to be and she seems to know exactly when to emphasise her character and when to calm her performance right down. I adored her sketchy reading skills and her comment that English all squiggles and scratches, slighting the language because it does not have pictographs. Peri rather cruelly tells her a child of five could do better. Quite usefully she can make herbal ointments for practically any remedy. She tricks the Jester into revealing her true identity. Erimem takes an affront to the suggestion that the Doctor thinks of her as a lesser life form, a pet and indeed when she finally meets up with him she asks him not to talk to her as if she was! A hitchhiker riding on the coattails of somebody far more grandiose? Jarra insults her, telling her she wants a pet that’s less yappy! My favourite moment came when Erimem turns on Jarra during a self-pitying ramble about her treatment by the Time Lords and Erimem screams ‘Get over it!’ Those are the words I have longed to here somebody say to the TARDIS crew of the last five stories…can’t we transplant her into the Divergent Universe to know their heads together?

Great Ideas: Simon Furman is a comic strip writer and you can tell by the number of big ideas that he brandishes. You have to wonder if some of these imaginative concepts were kept in the drawer for upcoming strips he was planning to write because I could just see some impressive panels coming to life with his visual storytelling. The TARDIS library has texts that span the whole length and breadth of human civilisation. The Axis is an interdimensional hub that regulates and maintains truncated realities and ensures that the contamination doesn’t spread to primary timelines. The damaged timelines are the work of the Time Lords, dabbling in the affairs of others and not tidying up, this where they tuck away all of their mistakes. Peri faces beasts plucked from myths and legends – the Fire Breeds. The Doctor is lead into a gaming hall where they are gambling with galaxies. The cries of the lost souls can be heard, those potential people from the cauterised timelines. The Jester is the sum of all our fears, from one of these twisted off realities. From the Oracle Room she can watch the dead timelines live on, looping through tired damaged finite history. Time Lords have an aura about them that they can recognise in each other and they can disguise. Jarra was carrying out experiments with Time Scoop technology and she was visited by a Time Lord to put a stop to it. She murdered him and he is now a festering, rotting corpse in her fun house. The Time Lords seized the planet and cut its timeline dead, leaving her to rot inside. Now she has control of the Axis she wants to destroy her world and infect the whole of time and space with the contamination of madness from the severed realities. When a Time Lord dies so does its TARDIS and the Doctor takes Peri and Erimem to an elephant’s graveyard of TARDISes.

Standout Performance: Marc Danbury gives a sweet performance as Tog, a character from one of these dead timelines. In any other circumstances his backstory and the fact that he is a total darling would have set him up as companion material but as we have only just gained Erimem and four is definitely a crowd he has to sacrifice his life instead. Can’t we have him instead of C’rizz? Both Garrick Hagon and Liza Ross give irritating performances as The Jester/Jarra but the character is supposed to be irritating so I could just about bear it and there were some humorous touches that salvaged the character (especially Jarra’s conversation with Erimem with her playing both parts. ‘But why, Jarra, why?’).

Sparkling Dialogue: ‘The lunatics have taken over the asylum!’
‘Would have been fun watching you smash your friends head open like a ripe melon!’

Audio Landscape: I was extremely impressed with the production of Axis, the sound FX are exceptionally good and all at ERS make sure that we take a trip through some hallucinatory landscapes. I liked the touch of the Jester’s bells, a nice audio indicator that he is nearby. The Fire Breeds cause mass destruction and have some very hungry sounding growls and belch fire with real gusto. There is an authentic sounding arcade and festival and I really liked the seaside jingle. The Doctor shouts out to Peri and it sounds like his voice is all around us. The Fortune Telling booth is great fun. Mirrors smash to dramatic effect and there is the sound of stars twinkling all around. The bubbling magma field pre-empt a raging Earthquake!

Musical Cues: The music is amusing and waggish for the Jester scenes, sounding not unlike a sinister fairground. There are a few cues that sound like the music in Zagreus but considering the music was the best thing about that story I’m not complaining.

Result: A nice return to form for Big Finish and the most Who-ish story since The Wormery. The Axis of Insanity is by no means perfect but here we have four episodes of fun and frolics, some tasty ideas being bandied about, a strong immersive production and some lovely moments for the Doctor and Erimem. Jarra is not the strongest villainess we have ever seen because she verges on the wrong side of hysterical cackling too often but she does make sure that the Doctor and co have a thoroughly unpleasant time and after all isn’t that what its all about. I loved the touch of the TARDIS graveyard but I do think the Axis could have been explored with some more depth. It would be nice to see some of the mistakes that Time Lords have cut out of reality. The Axis of Insanity promises good things from Big Finish still to come and I have never need that reassurance more than now: 7/10 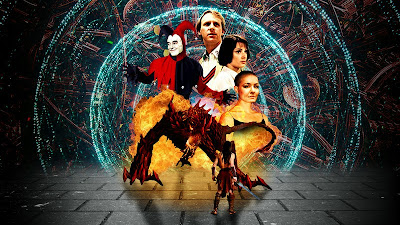