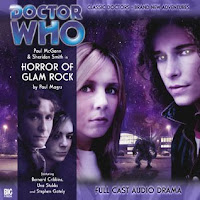 What’s it about: The Doctor and Lucie go glam when the TARDIS makes an unexpected landing in 1974. Slade, The Sweet and Suzi Quatro are Top of the Pops - and brother-and-sister duo The Tomorrow Twins will soon be joining them, if starmaking Svengali Arnold Korns has his way. But will their dreams turn to dust at a service station somewhere on the M62, besieged by a pack of alien monsters?

Breathless Romantic: A little more fun than he was in Blood of the Daleks and he gets wrapped up in the atmosphere of the 70’s leading to Lucie telling him that he likes a bit of handbag! He thinks tea in a motorway café is usually like a mouthful of copper coins. Arnold describes him as ‘the bloke in all the velvet tat.’ He thinks Lucie is just a kid. As an enthusiast of the age, the Doctor always wanted a stylophone. He doesn’t go looking for trouble but it always finds him anyway. He shows his teeth again when he wonders why he bothers with the human race at all sometimes. His technobabble is extraordinary – ‘I want to reverse its wotsit and make it a thingy!’

Luscious Lucie: She is still adjusting to life aboard the TARDIS and needs Ibuprofen for her travel sickness (especially the way the Doctor drives!). The 70’s always looks a bit rubbish on the telly, you know tacky and Lucie considers it to be the Dark Ages! I loved her reaction to seeing a corpse, ‘Look at what he’s wearing!’ The Doctor’s not her bloke and she’s got used to weird stuff lately. She’s glad she has met the Doctor and he agrees. Lucie is ecstatic when she realises that it is her Auntie Pat from the 70’s. Unfortunately she drops herself in it when she tells her Aunt that she never had any children, she doesn’t make it as a rock star and she is nothing out of the ordinary in the future (way to go Lucie!). Later Lucie proudly declares that the universe is teeming with life. If someone was to offer to show her the cosmos she might think that was okay…I love how the Doctor and Lucie skirt around the idea that they might love travelling together but neither one of them will directly say it. 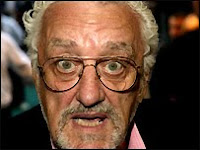 Unbeknownst to them and the listener but elements are introduced in this story that would later go on to tear the two of them apart.

Standout Performance: Glam Rock is more about scintillating performances than it is a complicated plot and it has possibly the strongest arsenal of talent than any other Doctor Who cast…I mean take a look! Bernard Cribbins adds some charm as record manager Arnold Korns, Una Stubbs makes for a heart-warming Flo, Lynsey Hardwick convinces as Auntie Pat out of her depth and Stephen Gately (RIP) and Clare Buckfield provide some youth.

Great Ideas: Lets face it…Glam Rock is a great title. I simply adore the name Mentholated Spirits for a band, its pure 70’s tack! Paul Magrs always manages to conjour up that feeling of cosiness on Earth and generates a fabulous atmosphere with words by setting the story in a motorway café cut off from the world by crisp, beautiful snow and broken dreams. Patricia Rider is Lucie’s Auntie! The Only Ones told Tommy that they were the only aliens out there. Arnold sacrificing himself is a surprisingly noble act considering how much of a bully he is in parts (I think that’s down to the mighty Cribbo’s performance). I love the eventual reveal of the Only Ones as beautiful wraith like beings coming out of the stylophone with graceful wooing when its suddenly ‘Oh its you, Doctor.’ When asked why they want to take over the world they respond, ‘This shabby dump? Don’t flatter yourselves!’ All they want is to eat through Tommy’s adoring fans; human beings are high in polyunsaturates apparently! They are sucked down a funnel like a genie in a lamp after Arnold goes at their beast with some hot chip fat. Trapped forever on shuffle mode, the Doctor warns Lucie to never play that particular track on her MP3. Ever. The Headhunter turns up again, she’s actively pursuing Lucie through time now but she just misses them.

Audio Landscape: Edwards and his sound engineers manage to conjour up a wonderful wintry atmosphere with biting winds, screaming cars, shivery breath and ghostly voices. The beasts sound positively ravenous and tear apart Ron like he’s a pork chop (‘Just like my Bentley! Only less expensive to replace!’).

Musical Cues: Very nice electric guitar score which sets the scene perfectly. The song Children of Tomorrow is 19070’s groovy! I really like it! 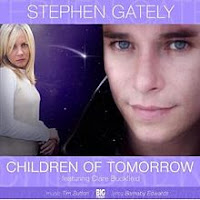 The madness of the rock Doctor Who theme at the end put a big smile on my face.

Result: What an odd, rather wonderful story! I cannot understand the purpose of such a story but to wrap us up in a warm glow of nostalgia for the 70’s and yet it achieves that beautifully whilst also providing a big snowy cuddle on a winter’s night. The cast are superb and give the warm material some real oomph and the story concludes nicely never forgetting the musical theme. I always get a rush of sadness when I listen to this story because of Steven Gately’s untimely death and in a story about broken dreams that seems even more poignant. Its not going to appeal to everybody but as another example of how this new series of eighth Doctor adventures are not going to play by the rules, it is a real breath of fresh air: 7/10

Buy it here from Big Finish: http://www.bigfinish.com/13-Doctor-Who-Horror-of-Glam-Rock
Posted by Doc Oho at 02:18

It's like Starman, only the aliens were coming down to eat us. Sure, the plot is slight, but it's good fun, especially if you're a fan of the era's music.