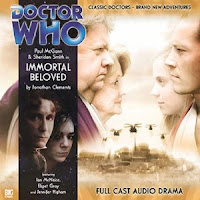 What’s it about: 'Theosophy? Ha! Surely you mean theophany? Because we're not talking about real gods here, are we? We're talking about the appearance of gods. Your heavenly powers are a little too mechanical for my liking. And, if I may be so bold, Lord Zeus, your demeanor is not very godlike.'

Breathless Romantic: The Doctor is Lucie’s bumbling assistant. His Miss Marple routine of turning up somewhere and sussing out what is going on and blabbing it all out without thinking causes more trouble than it helps! He’s seen his fair share of worlds ending. Its another story this season where he really goes at one character with a censuring attitude, where he utterly disapproves of their lifestyle. He doesn’t think the way of the world is immortality, he thinks its perversity. The Doctor would happily give an organ to save a relative’s life but he draws the line at wiping his mid to save a relative. There is a really tense moment when he is told that Zeus will make hundreds of clones of Lucie and perversely exploit and torture them every day killing them off one by one is he doesn’t do as he’s told and plant Zeus into Ares. I really like that the Doctor doesn’t simply destroy the ailing machine but leaves them to it to make up their own choices. He admits that he does need Lucie. This is a very responsible take on the eighth Doctor in a season that thus far is nailing him just right.

Luscious Lucie: I love Lucie’s breathless ‘Thank you so much…’ before following that up with a scathing ‘…for parking on the edge of a cliff!’ She really isn’t a girl you want to get on the wrong side of! Lucie sees two young people in a remote location and automatically jumps to rude conclusions! She is Lucie of the M68! A Goddess of anger? When her clothes go see through in the portal of cleanings she declares it the ‘portal of perving more like!’ A fan of soap operas. Lucie has a frank way with words and she doesn’t belong to the Doctor. She really gets put through the wringer in this episode, first being forced to watch as Tayden commits suicide and begging him not to. The way of the world here makes her feel ill. ‘I like you Lucie and think you would be an interesting experience’ – the fat, ugly, pampered takes a shine to Ms Miller and suggests that if she doesn’t come to his bed he will clone her with a lock of her hair and do what he wants with them. It’s a really scary, character defining moment because for once Lucie is really frightened. It is Lucie that spots that there is something wrong with the Sarenti transfer. She easily dismisses the possible fate of her clones. In a moment of righteous anger Lucie is willing to destroy the TARDIS to stop the Doctor from helping Zeus. She slapped the ‘fit’ Kalken and missed out on a snog!

Standout Performance: I really liked how meritoriously Ian McNiece played Zeus; he really manages to convince that he thinks murder is an acceptable way to prolong your life. His threats to Lucie were one of a few moments where he really threw caution to the wind and really went for the villainous bit.

Great Ideas: The suicidal opening is arresting, a prince and his missus willing to jump from a mountainside to protect their love. What on Earth could have driven them to this? 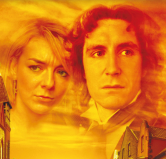 The Portal of Cleansing is a ponced up way of saying Decontamination Chamber. They make clones of their leaders every thirty years and let them grow to a certain age and if the older clone dies between the ages of 18 and 30 they are transferred into their mind, effectively wiping that person clean. It doesn’t do for important deities to die! When the transfer is complete the older body is then murdered – Ares doesn’t want to compete for his wife’s attentions! Zeus brought his people to this world and the crew that survived are treated as Gods, taking over the civilisation that were already here. Cloning is an art and you can lose things if you don’t know what you are doing. To make a perfect copy of yourself and rule forever is something that all great leaders, from Emperor’s to Pharoah’s, have aspired to. When they were experimenting they tried transferring one mind into several bodies with disastrous results. The race against time, killing Serati to save Hera is a really tense moment. Kalken will pretend to be Zeus now but never forever, growing old with the woman he loves.

Sparkling Dialogue: ‘What is this? The planet of idiots?’
‘Long live the King! The King is Dead!’

Audio Landscape: The mountain climbing opening really gets your attention with its biting wind at a real altitude and rocks clipping down the side. The helicopter approaches to pick them up. The night birds and insects suggest a planet teaming with life.

Musical Cues: Once again this season the music is terrific, its dramatic in parts, soothing in others and is perfectly in synch with the atmosphere of the piece.

‘You! I hate you!’ – I love it when Ganymede shows up; this is all he ever says!

Result: A story with a morally ambiguous concept at its heart which the Doctor and Lucie condemn and Zeus and Hera defend. It’s the first story of the year where I feel a longer running time would benefit to explore its dramatic ideas (in particular the ending feels very rushed) but because it is condensed the story feels really punchy and thoughtful. Its Lucie Miller’s coming of age story and Paul McGann continues to impress as the tougher Doctor. Immortal Beloved flew by for me and had just enough set pieces and moments of discussion to really drive home its intriguing idea. Highly enjoyable: 8/10

Buy it from Big Finish here: http://www.bigfinish.com/14-Doctor-Who-Immortal-Beloved
Posted by Doc Oho at 03:25