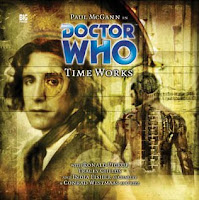 What’s it about: ‘You want to know about the Clockwork Men? ‘We work in their shadow, every tick and tock of our lives. We hear them in the workings of the Great Clock. We work hard, turn our hands -- but we all wind down in time, and that is when they come for us: when our time is up.’ The TARDIS lands in between times, in a time where this is no time. A time in which nothing can possibly be. But something is... The Doctor, Charley and C’rizz are rats in the wheelwork, a threat to the schedule of a world where timing is everything. And the seconds are counting down to a fateful future that has already happened. Unless they can beat the clock. Tick, tock.

Breathless Romantic: The Doctor and Charley have put together a list of all the things they simply must show C’rizz (I wonder how many they will get around to…). Even the best parties become humdrum when you’ve been to as many as he has. Outside the TARDIS doors there could be anything and that really excites him! He’s not a time waster and will not show them to the TARDIS. He will turn his time to almost anything. The Doctor stands at the nexus point of countless billions of times threads. He is best man C’rizz has ever met. They can’t see a future wherein they kill the Doctor without jeopardising their long tem goals and so he is invulnerable. Normally he wouldn’t think about wanton violence but he picks up a crowbar to deal with the Figurehead. The Doctor knows what it is like to have an obsession, to spend every moment working towards an impossible goal and he wouldn’t wish that on anybody. He’s learnt to enjoy his work again! They’ve got work to do but it can wait until tomorrow.

Edwardian Adventuress: The Doctor talks a lot of nonsense and it doesn’t mean they have to do the same! Its great to see Charley and C’rizz trying to work out this time frozen puzzle, the script concentrates on their intelligence rather than their relationship. She can’t lose the Doctor yet, they haven’t had enough time. Charley deliberately flunked the test but didn’t realise it would lead to her death! Hahaha – the only danger if they result is that Charley will be killed because she doesn’t have a job and is expendable – DO IT! The Doctor says she is precious to him.

Chameleonic Rogue: C’rizz thinks it is good that the rulers of this world don’t set themselves too far above their people. Why does he need his own validation? Why doesn’t he trust his own mind? He won’t be brainwashed again, it has happened to often and too easily in the past – the Doctor is trying to help him to overcome future attempts. Scored well on problem solving skills and demonstrated a high level of alertness.

Standout performance: It seems that if Steve Lyons writes a script that Tracey Childs isn’t too far away and once again she gives an outstanding performance. I could listen to her silky voiced Figurehead all day – she is both chilling and seductive and a very memorable villain.

Sparkling Dialogue: ‘Remember Charley we are only seeing a snapshot of time. We don’t know what events might have led up to this moment.’ This is Steve Lyons at his thoughtful best, giving depth to something we take for granted. Look at a photo, any photo and you think you know what is being depicted but what events led there? Are the people genuinely happy? A visual snapshot of time that records the events but cannot accurately be interpreted. Fascinating stuff.
‘I think its high time I spoke to the clockwork men. I want to find out what makes them tick.’
‘The clockwork men could see the future but just this once they were helpless to prevent it.’
‘Your people have enslaved to the beat of your great clock for too long Figurehead! Its time it was stopped!’

Great Ideas: Brrr look at the disturbing graphics of the clockwork men on the cover… An uncharted planet on the edge of a dwarf star at the edge of an elliptical galaxy. The winds of time unable to break in and alter the landscape. Time has set around them like amber. All the watches are synchronised and frozen at the same point. People from the Middle Ages wearing watches and holding mobile phones. A woman running from the police force, all eyes on her. A clock stopper – somebody who takes your time. The Doctor

has left his friends an hour in the future. It’s the clock tower that stands in the centre of the village with a four-way clock face so it can always see you. The clockwork men come for you if you have no work. The great clock measures their time towards completion. The clockwork men were looking for one person and he was atomised. Its rare to find a monarchy that has as much control as their reputation warrants. Charley puts a C’rizz’s jacket around the head of the Doctor’s executioner so when time unfreezes he will be blinded temporarily. Hypnotising people – planting suggestions whilst they’re frozen? Once upon a time the people of this world overthrew their Gods, they believed that they should be accountable to nobody and as a result they became idle. They squabbled when they should have worked in concert, they held back science through fear of its misuse and they died. They predicted the catastrophe, the approach of the asteroid that would render them extinct but they had no missiles with which to deflect it and no ships in which to flee. Only as time ran out for them did they realise its paramount importance. That was when they finally turned to the time beyond their time and that was when they created the Figurehead and charged her with rebuilding their civilisation, to realise their full potential. After her creators died the Figurehead waited hundreds of years until the planet was habitable and had her drones reseeded with the DNA of her former masters and became their accountant. Retired = murdered in cold blood. Vannet is barren and is disposable. There is nothing they can do that they cannot predict. How long until the clockwork men realise that they can’t afford to cutback any more workers before the project falls apart around them? 6.16 – the time of their emancipation, when the clock finally stopped forever.

Audio Landscape: You can hear the astonishing reverberations of a ticking clock from inside the mechanism, a loud wind, the TARDIS engines grinding, the bustling marketplace, the Doctor’s dripping cell, the frightening tinkling tick-tocks of the clockwork men, horse and cart, smashing down the door, the mob, pulling the clockwork men apart,

Musical Cues: A chilling violin score, the music is extremely atmospheric throughout with a mourning, exciting feel. I love it when the music is a bit different from the norm and this certainly warrants that description, a gorgeous classical score.

Standout Scene: The first cliffhanger as the clockwork men approach is genuinely spine tingling, the sound effects are really scary.

Result: Clever, lyrical storytelling with a truly haunting first episode. There are moments of narration throughout that give this coldly rendered story a fairytale quality. Of all the Big Finish writers Steve Lyons always uses the medium to take a clever idea and explore it in the world of words and this is a glorious Sapphire and Steel-esque depiction of a world of controlled by time with a unique temporal language and a narrative that can jump and freeze between a tick and a tock. Its Ed Salt's best direction by a long shot, bringing his ability to let the performers shine to the fore but crawling under your skin with some subtle atmospherics. The regulars are good but not great, the fact that they are pleasing to listen to at all is about as good as it gets with this team at this point so kudos for that. Full of exciting imagery and furnished with a classical score, Time Works has an atmosphere all of its own and should be celebrated for its uniqueness. I really like it: 8/10 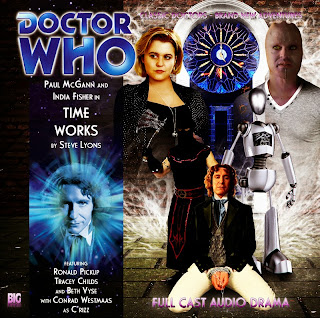 One of my all time favourite musical scores for a Big Finish audio. Even when I forget the details of Time Works story I can always remember the music. An effective score really can make the difference between a good story and a great story.