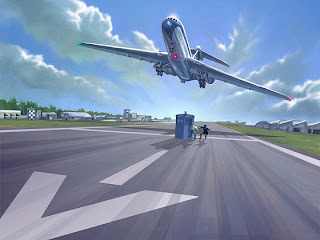 This story in a nutshell: A potential new companion, the departure of two popular characters and an elongated tale of doppelgangers and abducted children…

Oh My Giddy Aunt: I barely recognised Troughton at all in the first episode because his characterisation is so incongruous – the Doctor displays little humour or authority and wants to contact the authorities as soon as possible! He doesn’t have time for official mumbo jumbo and he certainly doesn’t have a passport. When the Doctor gets tangled up with the airport Commandant that is when Troughton’s mischievous persona really starts to emerge. After finding his feet with the character by butting heads with authority figures in The Macra Terror, that same mischievous charm is fed into this story. This is the first instance of the Doctor telling Jamie ‘when I say run…run!’ It’s also the first time that Patrick Troughton and Frazer Hines have been given the opportunity to indulge in a bit of business too, what with the silly shot of them hiding behind newspapers together (Jamie’s being upside down!). I love the images of the Doctor, Ben and Jamie posing cheesily inside the photo kiosk. There’s plenty of opportunity in this script to show off the fun interaction between this season fours regulars. Wow imagine if the Doctor pulled off that ‘I’ll blow you all to smithereens!’ trick in the middle of a busy airport now. He’d be cut down in a hail of bullets faster than the 7th Doctor was when he visited San Francisco. Watching The Doctor walking into a trap and trying to think his way out of being frozen to death is a gripping experience, if only because the Doctor can’t talk his way out of this with his usual bluster and humour but instead has to think quick and cunningly. Troughton seems full of energy in this story, and looks far more like a young, lively soul than the older, panic stricken, universe weary man he would become in season six. There just seems something more vigorous about him in his first year. I like both approaches but I am more used to seeing the latter (because that is simply where a mine of episodes exist) so this flea on a griddle version seems a little unusual. The Doctor says Ben and Polly are lucky to get home because he never got to. He sketches out a possible future for them, together. 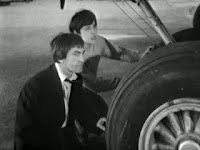 Who’s the Yahoos: It’s the last time that we really get to see Jamie experiencing any kind of culture shock before the idea was dropped and he takes every new location in his stride. He’s terrified of planes (‘great flying beasties!’) and walks around the airport in something of a daze, never having seen a building of its type before. I can understand why they eked out this sense of alienation because it would get tiresome for the Doctor to have to explain all about the location as well as the plot to his assistant but we do also lose that sense of wanderlust that comes with it which is quite enticing. It does us well to remember the magic of things that we take for granted. Jamie has to pretend to be sick in order for him and the Doctor to gain access to the sickbay and the Time Lord tells him not to overdo it (like he’s some ham actor). It’s a small moment but suggests the glories to come with this pair. He’s not above sneaky tactics, snogging Samantha in order to nab her ticket and take her place on the flight. Taking off on a plane must be a singular first time experience for a hairy legged Highlander and the writers don’t shy away from his culture shock. Its nice to have Jamie up in space whilst the Doctor is grounded on the Earth, its proof that this character has legs and can carry the story. That would be essential moving ahead with the departure of Polly and Ben. Jamie’s duplicate losing his Scot’s accent is a lovely touch to those in the know about Frazer Hines’ true lineage. 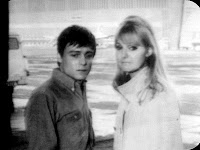 Able Seaman & Lovely Lashes: Ben and Polly deserved a much better send off than this and the lack of love for these characters means that they get as ignominious an ending as Dodo. Its not so much departed as pushed. I’m rather fond of this often forgotten pair (mostly because their episodes have suffered a serious junking) and feel they deserved more closure than ‘oh look we’re home, bye then Doctor!’ I can only think of the aforementioned Dodo, Liz Shaw and Romana I getting less satisfying endings (and the last two are only because they don’t get any at all, its literally now you see me, now you don’t) and some of their missing stories (The Smugglers, The Macra Terror) are neglected gems. If what Anneke Wills claims is true and she was offered the chance to stay on then there is a great opportunity in episodes one to see how things would have been with just the Doctor, Jamie and Polly. The shot of the Doctor and Jamie merrily wandering off whilst Polly is knocked unconscious and kidnapped just about sums up the aims of this story. 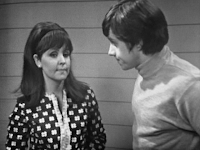 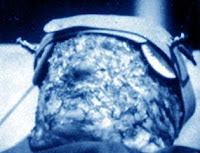 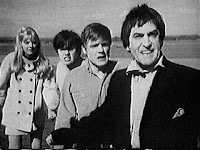 Result: With its coarse location work, locked room mysteries and bureaucratic nightmares, the early episodes of The Faceless Ones is more like the first Emma Peel season of The Avengers than Doctor Who. There’s a great deal to recommend about this story, especially when it ventures wildly into science fiction in the latter episodes but there is no denying the fact that it is two episodes too long and would have served much better a pacy four parter. There is far too much too-ing and fro-ing from one location to another and repetitive action in the first half which means once the twists have done their business there is frantic lead up to the climax. Perhaps it is a mixture of its contemporary setting, the prominence of Jamie (who is very pretty) and Samantha (who is even prettier) and the way the writers stack their revelations and great ideas across the six episode that kept this story popular (most Doctor Who stories have a habit of starting with strong ratings and tailing off but The Faceless Ones scores nearly eight million for episodes one, three and six). The dream team of Patrick Troughton and Frazer Hines are as youthful and full of vigour as they ever would be but Polly and Ben are short-changed in a rather severe way in what should have been their memorable swansong (the responsibility of which falls on The Macra Terror instead in which they dominate). Sam Briggs is the one that got away, a much more attractive prospect than the Victorian cream puff that was to come and she slips in with the Doctor and Jamie with ease. Add in some strong guest performances, a generally polished production (although the direction is occasionally stilted) and fantastic premise (aliens colonising through such insidious means proving to be misguided victims of a natural disaster) and you have a story made of fantastic ingredients. It feels like it is leading up to something special but everything fizzles episode six with the Doctor making promises that he is never going to stick around to make sure will happen. This would have made a four episode classic, instead at six episodes it is very good but is not quite as spectacular as it wants to be: 7/10 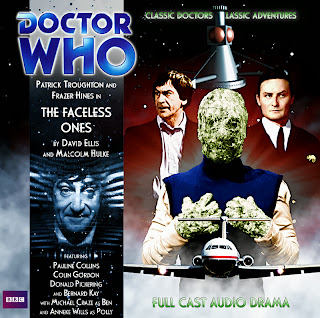 May I republish this review in my Dr Who fanzine, please?

Of course, is it online? Or a physical mag? Anyway I could wing a copy?

Hi Joe, Thanks for saying yes. I'll send you a copy once done. The site is at http://time-rotor.proboards.com/

I have tried eight times to create an account for your forum and it keeps kicking me out saying I'm not filling in any of the fields correctly when I'm just doing what it asks! What am I doing wrong?

Please email your registering email account to time-rotor[at]hotmail.com and I will fix it? Also a username too!

I forgot to add the .au to the end of the email.