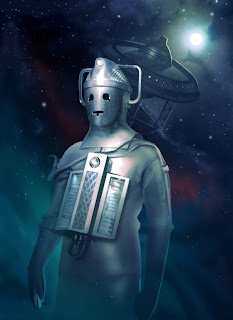 This story in a nutshell: The story in which it takes the Cybermen six episodes to try and stow away aboard a space station… 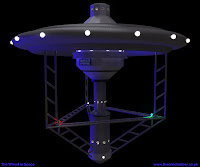 Oh My Giddy Aunt: Whilst the Doctor’s characterisation is generally excellent in this tale, there is an oddly muted atmosphere in the first episode where he and Jamie try and cope with the loss of Victoria. Its clear that without a female presence in the TARDIS that this dynamic feels a little jarring (when it was one of the highlights of Evil of the Daleks). He really should stock up on Mercury, he’s had his fingers burnt once to often in this respect. They try and smooth over the Doctor’s absence in episode two by filling the story with lively guest characters but the show is called Doctor Who for a reason and its only when charismatic companions can take up the slack left by the absent central character that they get away with it (such as The Seeds of Death episode three). It’s the first instance of his alias Dr John Smith and its handed to him by Gemma. Perhaps his affection for her encourages him to use it in subsequent adventures. The first time Troughton gets to show any moments of charm is in episode three which would be unthinkable in any other adventure (even in The Underwater Menace he is off for a paddle on the beach within five minutes). The chemistry between Patrick Troughton and Wendy Padbury is immediate and you can see how her no-nonsense intelligence is going to rub up against his social anarchy. There’s affection there but she is often far brainer than he is and he has a great deal more life experience its that personality clash where all the fun is. You’ll see it time and again in stories like The Mind Robber and The Krotons. The Doctor talks far more passionately about the threat of the Cybermen (‘they’re ruthless inhuman killers!’) than the director does. Nowadays far more would be made of the moment when the Doctor is forced to watch Gemma get needlessly cut down by the Cybermen. It would be the feature of a ten minute coda where he endlessly bursts into tears. The Wheel in Space at least gets this angle right, showing us the Doctor’s pained reaction to her death and then takes a breath and gets on with his responsibilities. 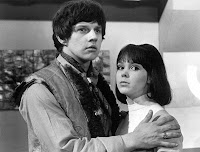 Hairy Highlander: It only takes Jamie a few moments in Zoe’s company to threaten to put her across his knee and spank her…they are clearly going to be great fun together. Jamie listening to himself on a tape recorder is the first time in an age where they have made reference to his (lack of) knowledge. Its been dropped completely since he emerged into his second season, the show instead highlighting his glowing chemistry with Troughton. It’s a shame because I would loved to have seen the Second Doctor educate Jamie in the same way the fourth does with Leela in her initial run of stories. He’s always thinking of his stomach.

Brains’n’Beauty: Zoe makes an immediate impression and clearly stands out amongst the (mostly) dreary Wheel personnel. If you stood back from this story without any knowledge of the future and asked yourself who would be ideal as the next companion there really isn’t any other option (Gemma is fantastic but I can’t imagine her being a particularly stimulating regular…plus I would always be wondering what she and the Doctor are getting up when my back is turned!). Wendy Padbury embodies the role of Zoe wholeheartedly, laughing at Jamie’s kilt, patronising the Doctor and generally coming across as a condescending know-it-all. Perhaps not what you would consider ideal companion material because of her arrogance but it is Padbury’s obvious charms that smoothes out this characters rough edges and makes her so watchable. Zoe is socially awkward and completely unaware of her ability to piss people off until its too late – exactly the sort of person the Doctor should take under his wing and show the universe. That’ll teach her some life skills. In a scene that says more about where Zoe has come from than any other she admits that she is terrified of the idea of being considered an unemotional robot but she fears that she those that call her one might be right. She has had her head packed so full of facts and figures that there isn’t room for anything else. Its impossible not to feel something for her at that moment. She realises she has only been trained to react in certain kinds of situations and that she is pretty much useless now unless she breaks her programming and behaves irrationally. Some of the Doctor’s rebellious nature is rubbing off on Zoe already. There’s a mischievous look on Zoe’s face when Jamie says goodbye which says everything you need to know about her next move (you really didn’t need the shot of her crawling into the chest). 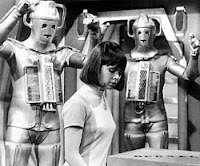 Sparkling Dialogue: ‘Well at least you didn’t think of x-rays. That would have been awful’ – another reason Zoe works so much better than Victoria for me, she puts Jamie down so brilliantly. 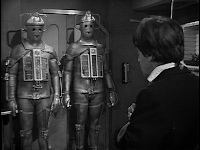 The Shallow Bit: There’s clearly something going on between Leo and Tanya. They are a pretty pair but they don’t exactly set my world on fire. When compared to the much more subtle flirting between the Doctor and Gemma, it lacks any substance. There’s no doubt in my mind that Leo and Tanya are offer to bed at the end of this adventure, the hand holding makes it explicit.

Result: The Wheel in Space is not completely without merit (there’s some fine characterisation for a start) but its one of the least dynamic Doctor Who stories you are ever likely to watch. People often claim that season six’s eclectic harkening back to the early years of Who is a deliberate reaction against the claustrophobic one location under threat formula of season five but come The Wheel in Space its clear that with regards to this sub-genre of Doctor Who the well has run dry. Its not the case of having to tell fresher stories next season, more a case that there simply isn’t anything else to be extracted from the base under siege blueprint. Thanks to an unsympathetic director this lacks claustrophobia, atmosphere and tension and thanks to (the usually reliable) David Whitaker the plot is just a tick list of mundane, procedural events. You might feel the need to blame Kit Pedlar because he wrote the outline but any writer worth his salt would fight against those constraints and produce something with energy and personality whereas Whitaker seems to have given up at this point and just goes with the flow. Have the Cybermen ever been this dull? At least in Revenge of the Cybermen they are so bad you can have a laugh at their expense. Here they sit mooch about plotting and scheming, not even bothering to have any kind of visual menace. Their voices are so lax even they sound like they can’t be bothered. It might not be so bad but if you hop over the Wheel and all they are going is sitting around (the Doctor doesn’t get out of bed until episode four) and discussing things with each other too. There is a general dearth of action that is unusual for this show and especially unusual for a six parter that needs that oomph to kept the audiences interest. Its telling that when the Australian censor clips showed up there was barely more than ten seconds excised from this deliquescent tale. The Wheel in Space has three massive pluses in its favour and that is Patrick Troughton, Wendy Padbury (Zoe makes an attention grabbing entrance) and Anne Ridler (Gemma). Frazer Hines is about but Jamie is pretty wasted in this environment. Whitaker wrote three phenomenal stories for the Troughton era so it’s a crying shame that he should depart the show (I don’t count Ambassadors of Death) on such an ignominious note: 4/10 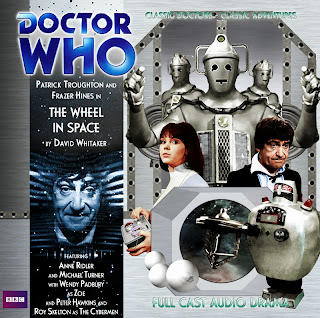 Nowhere near as bad as you say, though a great review as ever. Episode 3 is excellent, Troughton is superb, love his little 'oh good' and his chuckle at the Zoe put down you mention. Season 5 is violent, the Jarvis death is shocking, the Cybermen so imposing and terrifying. The confrontation scene with the Doctor is great. 'You know our ways' and 'I imagine you have orders to destroy me' from Earthshock will always give me goosebumps. Good story. Your point about the decline I feel stems more from Innes Lloyd leaving than running out of base under siege stories. Enemy of the World wasn't one of these. Bryant is not Lloyd, I think that's clear. This however was a good story.