Day One written by Chris Chibnall and directed by Brian Kelly 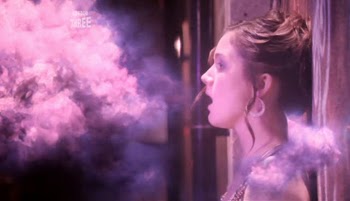 This story in a nutshell: Russell T. Davies on the sex gas that permeates this episode: 'when we're launching a new adult science fiction drama, it's kind of inevitable you're going to do the sex monster.'  Proving that as TV savvy as he is, sometimes he gets it very wrong.

Hunky Hero: Jack is so naive that he thinks his instructions on not allowing the alien technology out of the Hub is being adhered to. Everything Changes revealed that they are all up to it. The Torchwood regulars know nothing about Jack. He is a big mystery to them. I can't imagine why he would want that beyond the fact that he enjoys keeping them in the dark because he doesn't trust them.

Welsh Babe: The idea of a day in the life of Gwen Cooper as she experiences her first day at Torchwood is a smart one in theory so we can tag along for the ride and see exactly what that would entail. In practice it doesn't come off because it means we are new boy/girl as well and are as alienated by the rest the team as Gwen is at first. Also her first case involves a sex alien that is trying to froth up as much spunk as possible, hardly a crack investigation that is going to make her name. It's nice to see Gwen and Rhys so deliriously happy before Torchwood comes along and shits all over their relationship. Gwen almost seems normal in the early stages of this episode, calm and casual before she gets to the stage where she is annunciating every word with a bizarre Welsh strain and staring boggling eyed at everything. Gwen is shown to be utterly incompetent and unprofessional, releasing the sex entity onto Cardiff because she can't take a jibe from Owen. Gwen feels responsible for the sex attacks and wants to work doubly hard to prove herself. She's supposedly a savvy police officer but you would be hard pressed to buy into that given how badly she performs on her first day. There's being thrown in at the deep end and there's not trying to doggy paddle at all. Gwen has the wrong idea about alien life' she thinks they are all here to invade and enslave. She needs to speak to Sarah Jane and be filled in.

Jack's Crew: I still don't understand the logic in making the Torchwood team this impenetrably unlikable. I maintain that an episode like Fragments in season two would have been an ideal way to kick off the series, showing how each of the regulars joined the staff and why they are so impossibly aloof. Without that context they just come across as being a thoroughly dour, conceited bunch. Owen trying to record a colleague who is about to go down on a prisoner is the height of distaste. Ianto doesn't give two shits about Jack's sexuality which is rather odd given he is deep throating him by the end of the season.

Dreadful Dialogue: A crash course in dialogue so cheap it can literally sink a show...

'It's a shame your tools not big enough for the job.'
'I wish I never met you. I wish I were dead. Call me back.'
'He just...' 'Came and went?'
'You want to tell his family he died screwing an alien?'
'Put your trousers on and get out.'
'Where are you from and why are you trying to invade Earth because you can forget about enslaving us?'
'I just want the energy. The climax...' 'Just to recap, you've travelled to Earth to feed off orgasmic energy?'
'What are we doing having Chinese while a girl fights for her life?'
'Are you alright now or are you still feeling a bit of a cock?'
'Put out and APB. Woman possessed by gas knobbing fellas to death.'
'Rat jam!'
'All you want is to cum and you don't care what's underneath.'

The Good: Gwen makes a good point that the Torchwood crew have been stuck down in the dark, dank Hub with alien tech that they have forgotten what it is like to be human. It's going to take a far less corrupt human being than Gwen Cooper to remind them of that though. Instead of her injecting a little humanity into the series, Torchwood manages to suck what little she has out of her throughout season one. The Doctor's hand appears and with animatronics it manages to twitch with life out of the liquid. That's worth a raised eyebrow. 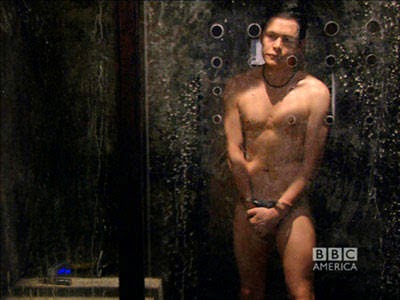 The Bad: Rather than simply send Gwen a message that says 'come to work' after the meteor falls, Jack sends her a text that simply says 'Torchwood.' The melodrama begins. Inside the SUV the keyboard and monitors zoom into place around you. Oh dear. I like the fact that Gwen tries to be the public face of Torchwood, the likable member that ingratiates herself with the officials. Unfortunately that only lasts this episode and before long she is decked out in black leather and arrogantly strolling onto the crime scenes in slow motion as if she owns the place.  The performance of Sara Lloyd Gregory is lacking in every respect. It is quite hard to sell the idea of an adolescent and desperately horny alien taking over your body with any kind of dignity but she plays Carys as a walking automaton before her infection and as a bizarrely asexual predator afterwards. It has the uncomfortable feeling of somebody being forced to behave in a discomforting way. I bet Gregory is a really lovely girl who wondered what on Earth she had gotten involved with.  There is nothing at all classy  about watching two young ones shagging in nightclub toilets, especially when it becomes apparent that the nightclub owner is voyeuristically overlooking and getting ready to polish his equipment at the free pornography. It would appear that Torchwood is not only going to be revealing the darker underbelly of the universe but divulging in the filthier side of humanity at the same time. I can't imagine why anybody would choose to watch this filth beyond a fascination with revulsion. Is there supposed to be something funny/scary/relevant about a man who orgasms his way into oblivion? I felt nothing for Carys' plight because I got to know her for about 30 seconds before she was taken over and in that time she comes across as a ridiculous drama queen who can't hold her booze. Why should I care about this person? In the middle of an episode about a murderous sex alien the Torchwood team stop for a get to know you Chinese takeaway. What the hell? How random is that? It completely disrupts any flow that the investigation might have had and proves utterly ineffectual at revealing anything about the staff. You would think that Chibnall had never written a script before in his life. I bet those criticisms about the JNT era on Points of View when he was a spotty Herbert haunted him after this was broadcast. People in glass houses... The Jack/Carys fight throughout the Hub might just be the nadir of the first season, tonally completely out of place with the rest of the episode, poorly choreographed and with both actors looking decidedly uncomfortable (particularly Barrowman who seems to compensate by going as insanely over the top with his gestures as possible). Wow, the exploding rat encapsulates everything that is wrong with this episode. Just when you think things can't get any worse, Carys winds up in a wank bank to get her kicks. And she's trying to cop off with a gay guy. Jack opening all the doors and finding little piles of dust on the wank material is so tacky it reaches a new sphere of b-movie style madness.

The Shallow Bit: 'First contact with an alien, not quite what I expected...' Huh? Gwen is bisexual? She'll happily snog a woman at work behind her boyfriends back? She's willing to clinch with an alien life form? Was anybody script editing this bollocks? Having Gwen copping off with Carys and then speaking to Rhys on the phone whilst she's still buttoning up her blouse might have something to do with the fact that I didn't warm to this character. She's sexually corrupt and would go on to prove to be throughout the first two years.

Result: Such a terrible, terrible episode that I am surprised that it didn't frighten everybody away from Torchwood in their droves. The fact that this show managed to build its audience and make the leap from BBC2 and BBC1 after producing drivel like this, Cyberwoman and They Keep Killing Suzie suggests two things to me. One that the general television audience is not discerning enough or two that they are too unintelligible to determine good television from bad. This is exactly the sort of TV I expect the Big Brother/TOWIE crowd to gobble up; crass, simple to the point of retarded and loaded with inappropriate content. It's such a car crash that you can't help but watch the results through your fingertips and wince. I think this is supposed to be a fun piece but it is so misjudged and po-faced that it misses the entertainment jugular by a country mile. I'm not sure what is worse; the perverted subtext, the graphic content of toilet sex, masturbation and lesbianism, the retarded characterisation of Gwen who never once convinces as a competent police officer, the unflinching arrogance of the rest of the team, the lack of a single identifiable character, the way the plot stops halfway through for the team to grab a Chinese, the piles of dust in the wank bank, the lack of anything resembling logic, scares, laughs or intelligence...this really is as bad as it gets. I find it hard to think of an episode of science fiction that is quite this tacky and I have seen some pretty hideous examples. Incompetently acted. Blandly directed. Atrociously written. Welcome to the semen drenched world of Torchwood: 1/10
Posted by Doc Oho at 01:55

What absolutely nobody seems to ever point out about this episode:

Gwen did NOT cause any of it. The alien came to earth, in a ship, for the express purpose of shagging fellows to death. Ok, she threw a chisel and broke the ship. Only difference between what happened because she did that, and what would have happened if there had been no mishap? The creature would have waited until there were no witnesses, then come out through the door that must have been built into the ship, and then proceeded to do the exact same thing it did in the episode - only without a guilt-driven former cop and a weird alien-hunting organization on its tail the whole time.

Plot –  I’ve heard a lot of people ask the question ‘why does this episode exist?’ when it isn’t about exploring space and trekking the s... 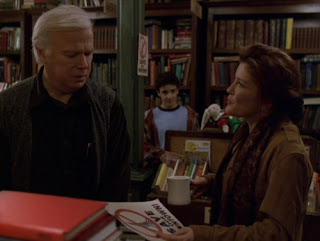