The Defectors written and directed by Nick Briggs 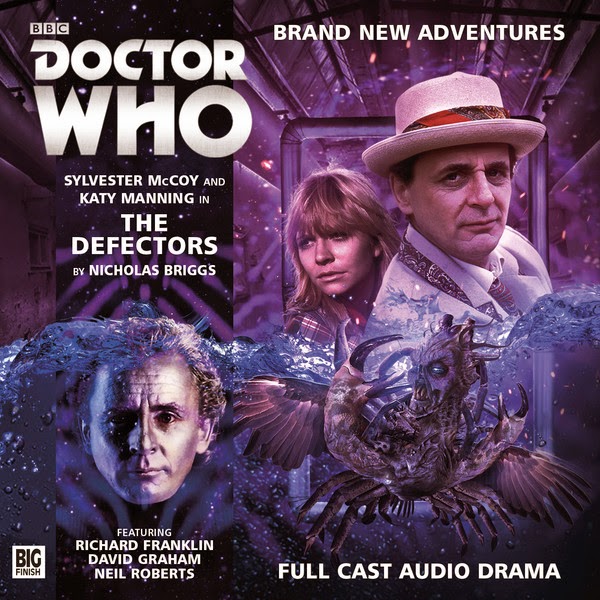 What's it about: Jo Grant is shocked to find most of her colleagues are missing. Then she discovers that the Doctor has inexplicably changed. But there’s no time to worry about it, as she and her misplaced Time Lord friend are whisked to the mysterious Delphin Isle on a matter of national security. There, they encounter a disturbingly odd form of local hospitality and learn of a highly classified incident that took place during the Cold War. Why exactly have they been brought here? And what is the truth concerning the bodies in the harbour and the vast project being undertaken beneath a cloak of secrecy?

The Real McCoy: McCoy seems quite at home in a lovely old Pertwee adventure, relaxing into the sort of atmosphere that his era rarely afforded him. If there wasn't much to the seventh Doctor's relationship with Jo Grant, he at least seems to be enjoying himself immensely stepping into his past.

Dippy Agent: This is more the snivelling, useless Jo of season eight than the competent and assertive Jo of season ten despite being told that it is set in the latter year. There's a bit of splash made about Jo being a capable member of UNIT but there really isn't much to back up that assertion in this story.

Camp Captain: Where was he?

Standout Performance: I have spent the last week listening to a number of companion chronicles, three of which were read by Katy Manning where she manages to perfectly capture the youth and enthusiasm of Jo Grant. Bizarrely The Defectors was the first time where I felt she struggled to do so, where her years felt as if they were fighting against Katy Manning. A shame because she is such an energetic and talented performer but the gruffness of her voice really took me out of the story at points and further reduced the idea that this was an older Doctor meeting a companion from his past.

Sparkling Dialogue: 'I'm guessing I'm not quite the Doctor you're expecting...' - hardly revelatory dialogue but somebody had to say it.

Great Ideas: For those of you who obsesses about such things this is definitely set after the Three Doctors because the events of that story are mentioned. The Doctor and Jo dragged to a mysterious coastal island by UNIT where the locals are all behaving suspiciously...it's fairly easy to get behind a premise like that because it is so Doctor Who. In 1951 an experimental Soviet craft ditched in the sea just off the island, containing a high ranking defector. They managed to salvage most of the craft and pilot has been helping them to rebuild it. The 'blue stuff' is a secretion from the aliens to help them control their cattle back home.

Musical Cues: I was a little distracted by the melodramatic nature of the music and it didn't have a signature of anybody that I recognised...upon investigation the soundtrack was delivered by Joe Kramer, a name I could not identify. Like the story itself, it isn't a terrible score, it just isn't a particularly distinguished one. On a completely unrelated note, I was listening to the scores of Russell Stone recently...whatever happened to him? His music in the early days of Big Finish was exceptional.

Isn't it Odd: When I first heard of the premise behind the locum Doctors stories my eyes rolled upwards and I sighed. Sometimes I feel like I am a right party pooper but the news came during a spread of stories where innovation was lacking and nostalgia was the order of the day. And this did not feel like an innovative idea (at least not in the way Big Finish were advertising it), it felt gimmicky and a bit wanky. Hardly the way to celebrate our way into the 200th Main Range release. I can even see the point of the idea, to give the companions of the early Doctors a chance to break into a the main range and prosper...but it still feels like something a 12 year old fan would do in their exercise book rather than the focus of a trilogy of adventures written by professionals. I remain to be convinced on the strength of The Defectors because putting the wrong Doctor with the wrong companions just feels...well wrong but not in a positive kind of way. The frozen inhabitants of the island is very reminiscent of The Android Invasion episode one, a story I know Nick Briggs is fond of thanks to the special features documentary he took part in on the DVD. The 'You called me Doctor' gag is repeated so many times I wondered if we had wandered into the Axon time loop by mistake as another kiss to the era. All the suggestions that the Brigadier is going to show up felt quite disrespectful to me. The creature depicted on the cover is a bizarre mish mash of creatures...it doesn't quite come together as the artist intended. It reminds me of the Lazarus creature, a hotch potch of interesting ideas that look cumbersome and unconvincing when brought together. All the aliens want to do is leave the Earth and resume their journey...which is hardly the most exciting modus operandi of your average alien species. For Briggs who is a Big Finish veteran there was more than your average overly descriptive dialogue. Given he is possibly the finest audio director it is a shame he doesn't think with that hat on when he is writing. It's the return of the aliens with modulated voices so indistinguishable that you have to strain like you are forcing out a curry to try and understand them. As for Mike Yates appearing in this adventure...was it really worth booking Franklin for such a small cameo?

Result: Davison taking part in a Hartnell adventure and Colin being paired up with Hines and Padbury again are two ideas that excite me but I cannot say I have ever given much thought to the duo of McCoy and Manning or that it is one that particularly lights up my world now I have heard the story. It is an middling pairing in a middling tale, a love letter to the Pertwee era that ticks all the right boxes ('What sort of base? Or let me guess...a top secret one!') but lacks three important elements (Pertwee himself, the Brigadier and the Master) and the warmth of camaraderie that powered the top drawer early seventies adventures. The Defectors is perfectly entertaining without ever threatening to become anything more than workmanlike. You could slip it into the player and kill a few hours but I can't imagine you ever doing so again (which is not something I would say about some of the other main range stories of late that I would love to experience again, especially The Widows Assassin and The Entropy Plague). I've just finished listening to it and I can't really recall much of the story because so much of it was filler material. The truth of the matter is there is about enough substance to adequately fill a 45 minute fourth or eighth Doctor adventure (and it would still be quite a light piece at that length) and the slack is taken up with lots of creeping about and empty banter. Nick Briggs is such a busy man, contributing to so many ranges as a director, actor, sound designer and writer that I think some of his talent is being spread a little thinly. Once upon a time he wrote Creatures of Beauty. Years later he wrote The Defectors. The difference in quality between the two is conspicuous. McCoy's perky performance aside (and it always comes as a pleasing surprise to me when he is the most enjoyable feature of a story), this is disposable stuff. There is nothing here that justifies the 'Locum Doctors' format and that is a bad way to kick start things: 4/10
Posted by Doc Oho at 01:57

Maybe Briggs is running out of ideas and needs to take a break to recharge?

Honestly Jo Grant work better with Matt Smith than with McCoy. So even Katy slyly hints it in Extras.

If someday Big Finish gets the license of the New Series, would sell my soul to hear an adventure Eleventh Doctor with an old Jo Grant.

"It's the return of the aliens with modulated voices so indistinguishable that you have to strain like you are forcing out a curry to try and understand them". Brilliant and so true ;) Regards, Oblivion.