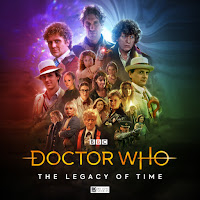 What’s it About: Fallout from the temporal distortions has now reached Gallifrey. To find the cause, Leela and Romana remember travels with the Fourth Doctor to the same world, at different times. The enemy is revealed, and it may take more than one Doctor to prevent the destruction of everything!

Mockney Dude: The Tenth Doctor showing up was a brilliant surprise and totally unexpected and was clearly supposed to be so since he didn’t show up on the cover. Bernice tells him that showing off is always annoying. The tension between the first and tenth Doctors is wonderful. Bradley’s Doctor is so unimpressed that he considers the idea of never regenerating!

Physician, Heal Thyself: The only Doctor who hugs all of his companions at first sight. He thinks the seventh Doctor had a midlife crisis – that’s why he inherited a gothic castle rather than a TARDIS.

The Real McCoy: ‘If you could turn your volume down on your trousers, that might help’ says the seventh Doctor to the sixth. Old grudges never go away.

Softer Six: The sixth Doctor gets to tell the fourth Doctor that it isn’t all about him. He thinks older and wiser heads can sort this problem out…until the 7th Doctor shows up. ‘Navigation?’ says the sixth Doctor to the fifth, ‘it took you nearly a year to find the largest airport in England.’ He’s appalled at the lack of a sense of location and so he decides to make a speech on behalf of them all…only to be cut of by everybody.

An English Gentleman: Amongst all those powerfully characterised Doctors, he’s just sort of there.

Teeth and Curls: He was yomping through jungles when Leela was still in leather nappies. The problem with Time Lords these days is that they are all so gadget obsessed and spend their time wandering the universe staring at screens instead of looking at what s around them. The Doctor likes it when Romana is bossy too, pondering how wonderful she is and what he would do without her. The Doctor respects Leela’s wish to call the spectre a ghost but he can’t help mocking her a little at the same time. Romana was quite unaware that the Doctor had any limits and thinks he is an impossible man. He can’t solve anything just by sniffing it (unlike the first Doctor and his extraordinary abilities in The War Machines).

Noble Savage: Leela and Romana. It shouldn’t work at all. One is a predatory savage with prized instincts and the other is a galactic super brain with political aspirations. And yet this is possibly the greatest pairing that Big Finish has ever developed because it brings together those very diverse strengths into a formidable friendship. And Louise Jameson and Lalla Ward simply sing together, two committed actresses who guard their roles carefully and provide a hugely entertaining counterpoint to one another. She wonders why people always build dull metal boxes to live in. Sweetly, in a moment where the Doctor is genuinely afraid, Leela says she will protect him. Leela is overtly emotional when she thinks the Doctor is vanishing from existence. She faces death how she lived, with a knife in her hand and strength in her heart. She’s magnificent.

President Romana: Bossy Romana = great audio. At least to me. The Doctor suggests she always tends to be melodramatic but she denies this. It’s more his style. She doesn’t think changing history is impossible, just ill advised. She knows she doesn’t even have to ask about Leela’s involvement, she will just be there for her. The one thing that all the Doctors agree is that Romana is the best.

Archaeological Adventurer: ‘I’ve had several’, says Bernice. She’s the mother of all the Big Finish ranges and so it seems only appropriate that she is there when all the Doctors come together to fight the Sirens.

Sparkling Dialogue: ‘Never underestimate how nosy a Time Lord can be.’
‘Did I ever tell how important it is not to tamper with history?’ ‘Several times.’
‘You know Leela, it’s been a strange old life…but didn’t we have fun?’
‘Time is Silly.’
‘I’d say you have an excellent nose when it comes to most things.’

Great Ideas: The causal fabric of the universe is breaking down. Or something. The Matrix is undecided as to the Sirens actual status but according to one account they were imprisoned by the Temperon, a benevolent creature of great power lost in the tides of the vortex. Leela thinks that Gallifrey has too many legends (she’s right) but Romana makes the excuse that it is an inescapable hazard of watching over eternity. The Sirens have broken free and engineered a colossal event in space/time and the ripples from which are spreading galaxy after galaxy. The structure of the universe is a delicate thing, the whole of time delicately balanced. One thing leading to another. As Time Lords they can view the whole thing, well most of it and right now it is falling apart. Great holes being torn through time itself, changing cause and effect. What the Time Lords planned to do on was so radical, so insanely dangerous that they hid it as far away from the universe as they could. The universe cannot contain two timelines and so one has to cancel the other out. If the changes are small then the differences iron themselves out, time getting back on the established as quickly and as simply as possible. If it is not a small change then the alternate timeline becomes either the dominant one or the entire fabric of reality falls apart and we are all erased from existence. The timelines are in chaos, so many alternative futures and pasts all co-existing. In the chaos all this they are remembering the events in those alternatives. It’s all happening. Leela is both dead and alive and never existed at all. Talk about existential angst. The Sirens feed on paradox energy, the effects of sabotaging the test flight are so immense that the potential alone gave them enough energy to act.

Isn’t it Odd: Wouldn’t it be awfully embarrassing if the Sirens of Time were responsible for the end of everything? Not the Master or the Daleks or the Time War. But a race of cosmic beings created by Nick Briggs to kick start the main range (an idea that apparently caused Paul Cornell to leave the meeting of writers in a fit of pique!). I would have hoped for something a little more…imaginative. But I guess the biggest surprise that the universe could offer us is to fizzle away in a moment of humiliation. There’s one dreadfully embarrassing moment when the Doctor screams and it just sounds like Tom Baker gurning in a studio. I’m sure all of the technobabble makes some kind conceptual sense, but I lost a handle on it halfway through the story. There’s a difference between writing a complex story and a story full of absurd complexities. Frazer Hines sounds a bit off in this story, unfortunate given how stellar he usually is in the Early Adventures. The huge climax seems to involve all of the Doctors coming together to…pilot a ship. It’s hardly the most climactic challenge they have ever faced.

Standout Scene: Let’s not underestimate the emotional power of witnessing two versions of the Doctor and Leela and Romana all dying. It’s stunningly acted by all parties.

Result: Satisfying, and pleasingly commemorative. Big Finish rarely misses an opportunity to wave a flag to get some attention with a marketable idea but this time around it was completely right for them to do so. 20 years of audio adventures and an immense back catalogue of adventures…where do you start celebrating all of that? Naturally some ranges and characters had to fall to the wayside (the los of Jago & Litefoot is particularly felt in part five) but I think that Matt Fitton and Guy Adams have done a sterling job in cherry picking enough important and established characters and ranges to highlight. Early on in Collison Course, I really liked the idea of Romana and Leela discussing the fact that the Doctor took them both to the same planet but at different times and how that turns out to be an important element of the plot. Watching both visits play out, side by side, is the best use of temporal jiggery pokery in the set. Given how many stories they have featured in, this manages to be one of the best 4th Doctor and Leela stories and that’s only for the first half an hour of Collison Course, which really is fantastic set up. It’s the best of this story, which devolves into a multi Doctor story but really doesn’t need to beyond the excuse to bring them all together for the party. It becomes a jolly bitch fight between the Doctors with some very funny dialogue. The Legacy of Time isn’t completely successful (I’m not sure that the plot holds together particularly healthily) but it remains the best Big Finish celebration by a country mile, getting all of its characters together for an almighty shindig that genuinely feels epic and, more importantly, celebrates those characters at their best. It leaves Zagreus and The Light at the End in the dust. The science fiction is there to explore the characters and any box set that brings together all of the Doctors, Benny, River, Countermeasures, Ace, Jo, Kate Stewart, Osgood, the Brigadier, Jenny, Charley, Menzies, Leela and Romana and celebrates all of their strengths gets my vote. Massive kudos for holding back on the Daleks, Cybermen and the Master too. This is a party about Big Finish and their creations (by creations I include continuing all of these characters lives after their TV span expired) and on that level it succeeds brilliantly. If they’re lucky, you might even want to explore these spin offs some more: 8/10 (8/10 for the set)
Posted by Doc Oho at 00:51

Are we (and by we I mean Big Finish and us fans) *really* still using the term "savage" without any self-awareness this far into the 21st century? :(

I couldn't help but grin hugely at the Tenth Doctor rushing over to give Benny a hug. And I loved that Benny was just so annoyed by the whole thing. I'd quite like the scene where Romana has to persuade Benny to steal the TARDIS and go play Uber driver with as many Doctors as she can find...

I must have been the only person hoping for a one-line cameo from Capaldi inside the TARDIS, directing the Third Doctor... For just a moment, it felt like it could have happened.

I squealed so hard when David Tennant's voice suddenly showed up. What a nice surprise. Good thing I stayed away from any of the reviews about this series beforehand. The Second Doctor asking permission to use the hammer got to be the most adorably hilarious thing ever. I need this pairing.

Although I have to say, the conclusion kinda disappointed me and I feel there should be one more/half more episode to properly explains it. The last thing we saw Benny is when she and River entered the TARDIS with the Eighth Doctor, and suddenly she plucked almost every Doctor out and brought it back — because Romana left a note? And where did Tenth, First and Second came from? I think I'm an idiot and missed a huge chunk here.