The War Master: Rage of the Time Lords: The Survivor written by Tim Foley and directed by Scott Handcock 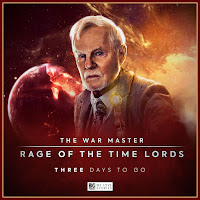 What’s it about: At the height of the Second World War on the planet Earth, Alice Pritchard wants for nothing more than the fighting to stop, and to do her bit for King and Country. But when the village priest offers her guidance, her life will change in ways she could never imagine.

War Master: The idea of the War Master hiding under the guise of Reverend Magister is even more sinister than when Roger Delgado had a go because this iteration of the Master is such an insidious swine. When he asks how would somebody like to help with the ware effort, it is a double-edged question. One of his jobs is to make sense of the senseless, to try new techniques. They need more than just plain old science and he senses that Alice is gifted. When he talks about fighting in a war, they all think he is talking about the First World War. Isn’t it sick that the Master has a purpose now, a reason to seek out weapons of mass destruction. And that he has cart blanche to do whatever he needs to to get it done. He can indulge his taste for carnage as long as he gets results. There’s nobody trying to rein him in, he’s being actively encouraged. He thinks he has the ultimate authority, whether that is as a Time Lord or a man of the cloth. He could have taken Alice at any time but he wanted her to come willingly. His opinion of the Second World War is a condemnation on humanity.

Standout Performance: Listening to Derek Jacobi silkily talking around an innocent girl under the guise of religion is enough reason to buy this box set on its own. When you’re getting advice like ‘if a Priest asks you to do something, you do it…’ what sort of a chance does Alice have?

Sparkling Dialogue: ‘We are in a state of grace, my dear. This church wasn’t built by Gods, but they certainly like to think of themselves as such.’
‘Anymore feathers in your cap, Magister? How about provocateur!’
‘So everyone will just…burn?’
‘I can give you a fight that is playing out amongst the cosmos…’

Great Ideas: Meat eating is outlawed on the Earth at some point in the 22nd Century. The crystals are a mean of boosting latent telepathic powers. Alice is a legendary choronopsychos, a legendary weapon that fell to Earth from the Time War.

Isn’t it Odd: It’s always very easy to get impatient with these War Master sets and wonder why they aren’t getting to the point and concentrating on what feels like extraneous characters instead of getting right down the throat of Jacobi’s Master. I might have made that observation at the beginning of previous set too except getting close to those characters was the entire point of the series and proved to be an emotional rollercoaster ride. It got me thinking about whether the Master should be front and centre of this series or somebody who is pulling the strings from behind the scenes and turning up occasionally to make his presence felt in a dramatic way. Certainly the latter seems to be providing us with some shockingly good drama. So, whilst the first ten minutes of this story might have you wondering if you have wondered into the wrong series, my advice is to be patient and wait see where this takes you. You might just be surprised. This story is ultimately very like The Master of Callous but condensed down into one tale. It’s the Master, on a mission to find a weapon that will aid in the Time War, doing it his way with as much destruction as possible along the way.

Standout Scene: Because I wasn’t especially connected to anybody in the village, I was smiling as they were all wiped out. Or about to be wiped out. God knows what that says about me. To be fair, they were all willing to go along with the witch trial (or traitor trial) of Alice without exception. The Master is such a bastard, he traps Alice in a situation where she has to act in a violent way in order to escape with her life, and he squeezes until she finishes them all off…

Result: ‘Judgement for all of you!’ What a strange story to introduce the set with. For the first half of its story, The Survivor is a deliberately small scale, intimate piece about a group of characters that I cannot imagine will have much bearing on the rest of the set, a minor role for the Master and only hints about how this weapon will come in useful in the War effort. The Time War effort. It’s a bold move, not entirely successful because tonally it is unlike anything before in this series and it does feel like an insignificant tangent. It is a story that is mostly sold on its performances and character interaction but for once I wasn’t entirely on board with that either. These people weren’t exactly stereotypes but they weren’t far from it. If you’re telling a story set in rural England during the Second World War this is exactly the sort of people you would expect to find. And being predictable is exactly what this series hasn’t been until now. The real beacon of light is the War Master himself; Derek Jacobi is just so shockingly vivid that he lifts the story whenever he appears. Things turn on a sixpence in the second half and the pace, plot and suspense all rachet up. That’s where the character stuff comes in handy because we’ve seen the seeds of discord between these people before they erupt into paranoia and suspicion. Where this mostly stands out is in its direction. Scott Handcock ensures that things are very quiet early on so when the trial begins there is a sick feeling of dread that permeates the audio. The Jacobi heavy second half really sees the story firing on all cylinders, but the first half was a struggle. This story just goes to show how the Time War touches all manner of times and places: 7/10
Posted by Doc Oho at 03:49