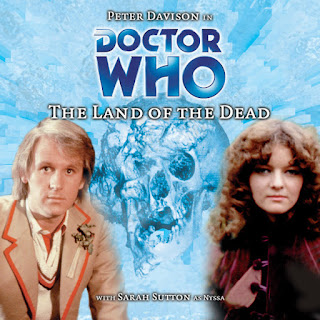 What’s it about: Landing in Alaska, the Doctor and Nyssa encounter a group of people in a most unusual house, cut off not only by the harsh climate but by their individual secrets and obsessions. Millionaire Shaun Brett is utilising chunks of the local area to construct a shrine to his dead father. But when deadly creatures start roaming outside, and a terrifying discovering is made inside the house, the Doctor realises that Brett has unleashed an unimaginably ancient force…

English Gentleman: This is a responsible take on the fifth Doctor but its nothing that stands out either. Cole has made the effort to capture his language style, even grabbing snatches of his dialogue from the small screen and inserting them into the story. He’s chivalrous, utterly polite to his hosts, makes the tea and generally acts like the perfect gentleman. At one point he admits that he and Nyssa are just good friends and I wondered if the attempt to ship them in later stories might be on the cards. They have a rapport of equality, they are both advocates of science and they clearly enjoy each others company a great deal. Unfortunately throughout this story he is saddled with the supremely irritating Tegan-clone Monica Lewis so rather than developing a fun relationship with Nyssa, he spends most of the time discussing how Monica reacts to various events in the story.

Child of Traken: Far more assured is the treatment of Nyssa who returns to the series after 20 years as though she had never been away. Nyssa is such an oddity because she divides opinion so dramatically. There are those that think she is the most boring companion ever; an uncharismatic scientist who the series creators wasted considering the potential drama of losing her home and family. And others (like myself and even the Doctor himself) who believe she was the most successful companion of the fifth Doctor’s era because she complimented him rather than butting heads with him all the time and because Sarah Sutton was nicely underplayed, sweet enough that you want to protect her and confident enough to believe that she is a woman of agency. This is a fine return for the character as she is given lots to do (a huge complaint of her time on the show was how much time she spent side-tracked from the main action of most stories) and she is practical and sympathetic throughout. She talks about losing her father and her world, is a competent bioengineer and has difficulty carrying her planets traditions around with her. She struggles with the spiritual and the rational, the two very often fighting each other. This is all good development for her character. Tulung thinks of her as his guardian angel and Brett ties her up as a ‘guard dog’ – to scream if the creatures approach. Like so many companions before and after, she finds the TARDIS unreliable.

Great Ideas: I did like the illustration of Brett’s house on the CD sleeve and the idea of the sea room appealed to me a lot. This section is pretty empty because for once the story is bereft of interesting ideas. I felt Cole was trying to see his story on atmosphere alone.

Standout Performance: For all the wrong reasons, Lucy Campbell as Monica Lewis. What an irritating character this is. Tegan in all but name and she oddly spends most of the story telling everybody how petulant she is and how much she wants to vomit. Campbell’s performance is really unconvincing, I did not for a second believe she was experiencing these events and some of her dialogue delivery turned some pretty bad lines into really bad ones (below).

Words That Should Never be Spoken: ‘The Doctor’s filling in the sea room door, he might as well fill you in as well.’
‘How is a fossilised skeleton moving about without flesh and blood to clothe it?’
‘Are you trying to cajole me out of my petulant moaning with weak humour?’
‘Man of Destiny, you sound like such a pill-ac.’
‘God it actually looks like dynamite too – how wonderfully retro.’

Audio Landscape: My favourite sound effect in this story was very simple but effective…how the story moved from the car driving through the snow to a dialogue scene in the car. I got the real sense that I was outside and smoothly switched to inside the car. However when that is the aural highlight for me we have problems.

Musical Cues: Nicholas Briggs calls this score his least favourite and you can see why. Like most of the story it is unmemorable, not giving the events the drive they need. I could hum you snatches of the music from Phantasmagoria but I cannot remember a single note from Land of the Dead.

Isn’t that Odd: The cover is appalling, but then most of the early Big Finish covers are sloppy cut and paste jobs. Janet Fielding wanted nothing to do with Big Finish to start with; I get that, but don’t write in Tegan in all but name anyway. Ms Jovanka is probably my least favourite companion anyway so Monica who shares most of her characteristics, was just annoyance squared. Fascinatingly when Tegan does make a return to the series in the main range it is a triumphant and that makes Monica's abrasive characterisation even more ill advised. My biggest fear of listening to Doctor Who on audio was that it would be a lot people screaming into microphones as though we were listening to a soundtrack of a televised story with no concession made for the fact that we can’t see anything. Fortunately Big Finish rose to the challenge triumphantly and producing some striking audio drama that really works in the medium it is in. However the end of part one was exactly the sort thing I was scared of…lots of shouting about nothing especially interesting, an action movie on CD. There are a number of huge information dumps in the story and rather than easing them into the plot gently over the course of the story they are dropped on your head like a lead weight. Episode two was the worst offender, setting up information about Brett and Tulung’s father. The direction is at fault as much as the writing – the end of episode three sees the ocean burst forth and release lots of creatures but instead of being assaulted by a torrent of water it sounds like a pathetic little dribble. I’m still none the wiser to what the creatures actually were, every time Cole tried to explain it and delved into mythological terms I switched off.
Something I learnt from The Inside Story: Land of the Dead was written in 7 days to replace the delayed Fearmonger in the schedules. It shows. Steve Cole is capable of writing much better than this. Lucy Campbell was Stephen Cole’s then girlfriend.

Standout Moment: There was a nice Jurassic Park vibe about the dinosaur rampaging about. Funnily enough on audio the dinosaurs look absolutely incredible.

Result: I can see what Cole was going for; a frosty atmospheric character drama with monsters and he may have succeeded if this was a McGann and Lucie 50 minute episode but Land of the Dead is far too long and far too poorly executed and so I guess it is a perfect evocation of a season 20 story. There doesn’t feel like there is an evolving plot or any meat to the story, just a lot of scenes that would probably look really cool on the telly with a huge budget and a dynamic director. The first episode is unspeakably boring; talky and uninvolving with dull characters and speaking the sort of language that people did during the Eric Saward years but in a way no human being has ever realistically sounded. Brett goes from charming host to ranting villain with no motivation and Monica Lewis should have died a horrible death at the hands of the forgettable monsters. When you have a cast this small you have to make sure and get the dynamics right but everything feels awkward. Davison tries his best with the material he is given, Sutton makes a positive return to the series but they are the only plus points in this stinker of an audio adventure. The worst crime is the missed opportunity; a snowy wasteland could make an atmospheric story. Gary Russell would make a far better job of it in Winter for the Adept and Big Finish would return to snowy wastes again and again with far more effective results: 3/10

Buy it from Big Finish here: http://www.bigfinish.com/04-Doctor-Who-The-Land-of-the-Dead
Posted by Doc Oho at 20:23

I'm with you, this one is a big bomb IMO. Too bad because some of the ideas are visually interesting.

I just found this one such a bore...highlighted by the fact that the ones around it are so much more accomplished!

Maybe I'm easily pleased or something, but I don't hate this one as much as pretty much every other person everywhere.

I tend to find Doctor 5 dull and unappealing but in Big Finish he's often not bad, and here Davidson just does a good job (great? Maybe not, but good, definitely). Nyssa is one of my least favourites but she's great here; the discussion from her about Traken being spirituality and progressive technology melded together... that gives Nyssa more characterisation in a single sentence than the production team gave her in 30 or so episodes.

I liked the 'chunkclick' of the beasties moving around. And everybody seems to hate Monica... but I found her not in the least bit irritating. Then again, I like Tegan, so who knows?

I don't think it's one of the best Big Finish did - I agree with the supporting cast being underwhelming, I couldn't always hear what was going on, especially when the sea floods, and like the Doc says, the ones around it are so much better that it makes this look negative by comparison - but negative by comparison isn't really fair on this play on it's own. I'd listen to it again, and it's enjoyable without being classic.