Phantasmagoria by Mark Gatiss and directed by Nicholas Briggs 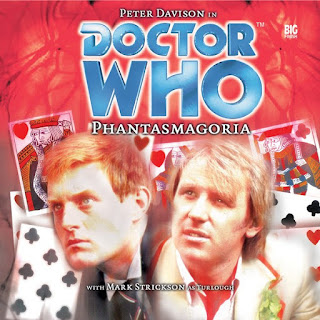 English Gentleman: Peter Davison’s Doctor rarely impressed me on the television, often because of underwhelming scripts and productions (which often had the right resources but the wrong directors) but also because his Doctor more than any other lacks the gravity of the others. He often felt like he was swamped by the adventures (and numerous hysterical companions) around him. However I do feel there was something of an improvement during the end of his run, starting with his engaging banter with Will in The Awakening, his authority in Frontios, the assassination attempt of Davros, the companion he should have had (Peri) and finally his commanding final turn in The Caves of Androzani. This adventure takes place during this period so it comes as no surprise that the Doctor is rather wonderful, with all that added acting chops that Davison has mastered over the years. He is still cricket obsessed, explaining the rules to Turlough and beautifully using Wisdens Almanac to defeat the villain. He strikes up an easy relationship with Samuel which begs the question why the Doctor never had an elderly companion (which Evelyn Smythe and Wilfred Mott would later on prove to be an invaluable idea). Turlough complains that he is elusive with answers but quite like the Doctor of this era he is quite free with the true of aliens and the TARDIS with the historical characters. I am very glad Big Finish has given an older Davison a chance to revisit his character and iron out the creases. The fifth Doctor and Turlough would be a relationship that was peppered throughout the Main Range (wonderfully the penultimate adventure is this pairing again, coming full circle) but it wasn't one that was given any real consideration or exploration. Aside from Loups-Garoux, Singularity and The Blazing Hour they mostly were squeezed into adventures with Tegan and Older Nyssa and there were just too many people about to give them the appropriate time. A shame because I think there is a lot to unpick there; a relationship that began with the companion trying to kill the Doctor and a level of mistrust throughout.

Looking over his shoulder: Turlough was actually one of the more interesting companions the Doctor travelled with. He had a mysterious back story and he was introduced in an intriguing way (a trilogy of stories where he attempted to murder the Doctor in various lacklustre ways). We learnt shocking things about his people (the Tractator attack) and he left with the truth about his character finally revealed; his family are political prisoners fleeing from their home planet. Mark Strickson was mostly on the ball throughout the series too; offering a shifty character that you didn’t entirely put your trust in and would always keep an eye on to see what he was up to (he had several opportunities to bump off Tegan and never took the chance so I couldn't endorse him entirely). The problem was that more often than not the stories did not really give Turlough anything to do. Which was a real shame but thems eighties Who for you. Turlough doesn’t entirely translate well to audio, certainly not as well as Nyssa or Peri do in later stories. In some scenes Strickson seems a little forced, like he doesn’t quite believe what he is doing (because he’s not actually doing it). I certainly didn’t believe he was eating and talking during the café scenes. He’s a bit of a moaner, with a voracious appetite and quite petulant. I didn’t quite buy that he was a fan of Earth history because he claimed to hate the planet in Mawdryn Undead. He is appropriately cowardly, running away from the spirits in episode one but is afforded a moment of heroism in episode four (‘It wouldn’t be cricket, would it?’) after claiming he isn’t a hero. Turlough was my only real grumble with the story.

Great Ideas: Valentine stealing learned men, marking them with his cards and calling on his previous victims to transport them to his hellish ship so he can slave their minds to the computer and restore the systems. You have to love how Hannah rouses all the victims to murder Valentine once he has been tricked into being slaved to the computer…killing both of them. This is a story that is playing on atmosphere rather than mad creativity so the fact that this story leans into two big ideas alone (the card game that if you lose you become a victim and the organic ship made out of those victims) is not really a problem.

Standout Performance(s): David Ryall has the perfect gruff villainous voice and creates a memorable villain in Sir Nicholas Valentine; a deranged, psychopathic and yet oddly charming killer.
Mark Gatiss deserves kudos for disguising his real voice so completely as the throaty and verbose Jasper, every one of Jasper’s scenes is a voyage of verbose vernacular, like he has been taking lessons from the great Henry Jago himself. A quick mention for (another unrecognisable) David Walliams as his chipper and camp companion Quincy Flowers. This is a remarkably strong cast.

Sparkling Dialogue: ‘I’ll soon be able to let me britches out meself as a marquee for the coronation!’
‘Wounds! I can’t say I favour this coffee stuff meself, Flowers. Tastes like something that’s dropped from the wrong end of a cow!’
‘The sweats standing off him like diamonds on a cloth.’ What a great visual metaphor.
‘What hell mouth is this? The walls like wet liver!’ And again…
‘Valentine is calling in his debts.’

Audio Landscape: This story is a treat for the senses. If you shut your eyes the sound effects conjour up the world of London 1702 with ease. You’ve got town criers, the clip-clop of horses, church bells, trees swaying in the breeze, children singing and playing and dogs barking to make the scenes outside come alive. Indoors there’s clocks ticking, fire crackling in a hearth, cutlery clacking and audience laughter in the theatre making things feel like you are really there. It's effortlessly done. Nick Briggs seems much more comfortable directing the more realistic settings of this story (his Earthbound episode two of The Sirens of Time was the best too) and he creates a terrific atmosphere with some relatively simple but subtle effects. His alien voices are really good two, creepy and unearthly. Rather brilliantly the TARDIS scanner makes a number of rather pathetic sounds, which is very 80’s Who.

Musical Cues: This story introduces the wonderful musical stylings of Alistair Lock who will go on to provide some fantastic music for the opening Big Finish audios. This is a rousing historical score, full of melody and bounce. He underscores creepy moments like the séance and provides a playful atmosphere in scenes like Turlough and Jeake prowling around outside Valentine’s house.

Isn’t that Odd: That Turlough should be chosen to kick off the fifth Doctor’s adventures when he would only pop up every now and again…it does rather suggest that this would be a regular engagement with Davison and Strickson but that doesn't turn out to be the case at all.
Also for storytelling purposes I can see that Valentine’s ship, which he has working on for years, just happens to be ready to lift off at the dénouement of the story, but it is an incredible co-incidence. Mind you, many a Doctor Who story has been structured around remarkable coincidence, especially during this period on TV so I guess you could say that just adds to the authenticity.

Standout Moment: The end of episode 3. I love the fact that they have produced these audios in the style of the old four part adventures from the television but it means they have to work extra hard to shock us at these climactic moments. The revelation that Hannah is Billy Lovemore and they are both aliases for an alien comes from nowhere and is still an effective surprise.

Result: A far more assured and confident production than The Sirens of Time with Nick Briggs grabbing hold of Mark Gatiss’ atmospheric and giving script and bleeding it for every laugh and scare. This is traditional Doctor Who to the core and it revels in the fact; the Doctor is clever and amusing, the guest cast colourful and enjoyable and the villain is despicably hissable. There is nothing here that is especially fresh but the pieces are put together with such gusto and as an example of how agreeable and visual these audios can be. Davison seems to enjoy the material, although Strickson feels a little forced. There is an extremely impressive guest cast, an abundance of witty lines and the whole thing moves along at a fair lick. Because I can’t keep listing standout performers I want to put a word in for Steve Wickham who puts in a very sweet performance as Samuel and would go on to play a character utterly different in The Fires of Vulcan. Phantasmagoria would probably flounder later on in the range where we expect things to be constantly innovative but as a positive first step in to producing adventures these Doctors could never have on the TV this story gets a huge thumbs up: 8/10 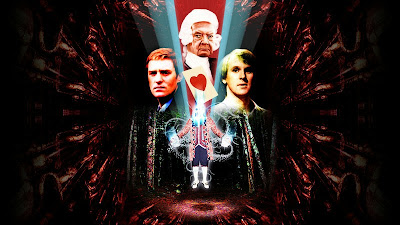 i wasnt going to buy this one but i did and now im glad this was solid dr who adventure. im still not sold om turlogh but he was much better then i expected and i think ill give him and 5 another shot. for me jasper and flowers steal the show! it would great to hear them with all the other BF doctors