The Sirens of Time written and directed by Nick Briggs 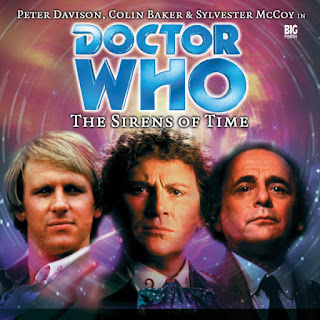 English Gentleman: This is the fifth Doctor I have always asked for (but rarely got). Davison is a revelation on audio, his instantly recognisable voice commanding and a little older sounding, but all to the benefit of his younger looking Doctor. Along the way he would find his feet as a very different Doctor than the one you might recognise on television but since Davison himself thought he was too young to play the Doctor, this is the Doctor that he perhaps would liked to have played all along. You would think that surrounded by the bombastic sixth Doctor and manipulative little seventh Doctor he would be a bit lost but Davison manages to hold his own beautifully (he's the most prolific actor of the three in terms of television by far and that might feed into his scenes with the two of them). He is a first class gentleman, travelling with Tegan and Turlough but we don’t get to see them (hurrah, finally unencumbered by whining companions), described as an educated young man and compassionate. He can think on his feet quickly too, making up lies to get back to the TARDIS. This is a very promising beginning for the fifth Doctor on audio. I look forward to hearing more. If this is where we begin with him...where will we end?
Softer Six: As good as Davison is, Baker matches him beat for beat. This is the real renaissance of Big Finish, rehabilitating the sixth Doctor, a much hated incarnation of the Doctor. I will go on to explore this in considerable depth over the next 230 odd releases but it still thrills me to think that thanks to the valiant efforts of both Baker and Big Finish that this Doctor has had a rehabilitation enough that pretty much everybody who still loathes his Doctor on TV adds the caveat 'but he's great on audio.' It has long been proposed by Baker fans (including myself) that it was the scripts and behind the scenes that spoiled what could have been a decent run for a fine actor and Big Finish has given us the proof. With Baker finally having some input into what makes his Doctor tick he makes him an amiable, polite, charming sort of fellow, travelling alone, softly spoken and a real treat to share an adventure with. He is observant, surprisingly modest for the most part, tangles with the authorities with glee and with a gift for poetry. A genuine pleasure to listen this sixth Doctor. And he would continue to be my favourite throughout, with an astonishing run of quality stories.

The Real McCoy: The most disappointing transition to audio is the seventh Doctor who relied on his brooding presence and piercing eyes to puncture a scene on television. I always felt that McCoy was the weakest performer, with some inconsistent performances unbalancing some great scripts and he is certainly the least believable of the three here. He still has real trouble shouting convincingly (it's really odd) and doesn’t really have a chance to shine in his episode, overshadowed by the plot going on around him. Still there are a few compensations; he has a melancholic tone to his voice in his first few scenes, cooing to the TARDIS affectionately and he has a few funny moments when he is with the other two, especially when he uses the more rotund sixth Doctor to break his fall at one point. Described as the thinker of the three. McCoy would go on to have something of a renaissance of his own in the middle run of the main range (100-150) but looking across the range as a whole he really suffers from a mixture of weak scripts, and first night readings of them that make it sound like some of the time he is not invested (or doesn't understand) the material.

Great ideas: The Temporan, the legendary time beast that folds its way through the oceans of time, serene, sublime. A prison planet holding a war criminal. The Sirens of Time feeding on divergences in the timeline. The story cleverly allows us to enjoy an episode with each Doctor stopping at a pivotal point and we learn in the last episode that he made the wrong choices and changed the timeline, feeding the Sirens the energy they extract from such deviations. They need others to cause destruction for them and Elanya/Helen/Ellie nudged at each Doctor in the right direction to do so. That’s some ambitious plotting and trust me that is not an accolade I will be throwing at Nick Briggs too often.

Standout Performance: Sarah Mowat because she plays four different characters and manages to make enough differences to make each feel like a character in their own right. I can completely understand why Nick Briggs gave her her own series in Dalek Empire. I saw her in the theatre in Eastbourne once and she was just as commanding there. Maggie Stables deserves the runner up prize for her unforgettable turn as Ruthley; chewing the scenery fabulously and being just weird enough to be slightly scary. Give this woman a part as a companion immediately.

Sparkling Dialogue: ‘If you do obey your orders Commander you’ll be signing the death warrants of the Time Lords.’
‘The Time Lords really do want me dead!’

Embarrassing Dialogue: ‘I’d trust you to drive me naked through a cheese grater.’ There will plenty more gems like this from Briggs to come.

Musical Cues: There is a haunting musical cue, a ghostly vocal that plays once in each episode that sounds a little like the music from Enlightenment.

Audio Landscape: The spaceship crash landing made me duck. The echo effect is used a couple of times but it is very atmospheric.

Isn’t that Odd: I understand why they choose the Tom Baker theme to introduce each of the episodes for the first bunch of releases because it was the most recognisable of the themes and they were trying to appeal to a mass audience rather than just Doctor Who fans. But the Doctor Who fans won out with Big Finish and the company essentially became a big nostalgia trip and so going back to these original stories with an inauthentic theme tune feels off kilter.

Standout Moment: The Time Lords taking over the German officer and attempting to assassinate the fifth Doctor – nail biting stuff. A portent of what is to come with Big Finish historicals; a genre I think they manage to nail pretty much every time and certainly with more consistency than the TV series.

Result: As an opening story this is probably a little too ambitious, especially since Big Finish were still finding their legs. Not an argument I would make somewhere in the middle of the run where ambition stagnated and nostalgia dominated. But this might have been the right place for Phantasmagoria; a traditional, atmospheric, clever tale rather than a multi Doctor platform with vignettes that barely tie together at the climax. I’m certain had they tried this story around the time of Zagreus when both the company and Nick Briggs had had much more practice at this sort of thing it would have been more dramatic and made much more of an impact. It’s a nice idea to have three separate episodes with individual stories and then tie them all together in the final episode but everything feels oddly disjointed; that fourth episode is a long time coming and ending each episode on a cliffhanger that we don’t get to see resolved is frustrating and hard to move onto the next story. Saying that, the story boasts some lovely ideas, some crude but still atmospheric audio landscapes and a good pace that never flags. Baker and Davison are surprise highlights whilst McCoy sounds oddly amateurish in places. It doesn’t help that the individual stories aren’t that interesting; episode two stands out and the most and was my go to recommendation for people to listen to when first dipping their toes into Big Finish and they wanted to hear something from the first story.. The final episode is okay but muted considering it is about 3 Doctors saving Gallifrey from invading conquerors. There is enough here to promise better things for the future but Nick Briggs will write and direct far better stories in the future, and worse too: 5/10 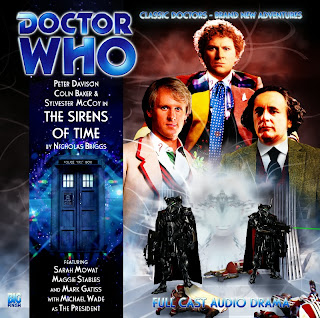 You only gave this one more mark than Judgement of Iskaar, yet despite the fact this had it's flaws(it was highly ambitious for a first audio adventure), I enjoyed this far more than Judgement. I agree with the most part with your criticisms, just wondering why the apparent disproportion.