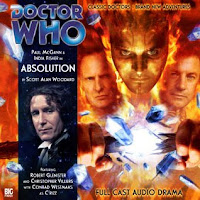 What’s it about: The TARDIS breaks down in a forbidden sector of space. Ghostly voices cry out for salvation and only C'rizz, the Doctor's Eutermesan companion, can answer their call - for only he knows the secret of the Absolver. But will he use it to rescue his friends or save the universe? The Doctor's sins are catching up with him and the infernal beast Borarus is hungry. Time is running out and Judgement Day is at hand. Welcome to Hell…

Breathless Romantic: Given the events at the end of this story and their tragic goodbyes in their next story together it seems almost cruel to have the Doctor and Charley getting on so well in this story. No mushy romance, no evil anti time energies, just two friends working together and enjoying each other’s company. If you listened to this story after Neverland you would be hard pressed to tell the difference between their interaction there and here. The Doctor calls C’rizz his own deus ex machina! As soon as the Doctor tries to jump back in the TARDIS and merrily skip over C’rizz’s death and move on to the next destination I was holding my breath waiting for Charley to burst. Whilst he objects, Charley tries to force the Doctor to admit that he never really cared for him and everything about his behaviour (especially his tone) suggests that she is right. People come and go, its not that he doesn’t care but ultimately everybody leaves and its just the TARDIS and him.

Edwardian Adventuress: Do you know I can remember a single domestic scene in the TARDIS between C’rizz and Charley before this story? Correct me if I’m wrong but the most we have had is console room scenes that are more plot than character oriented. Maybe that’s why this threesome never gelled like some of the others (Peri & Erimem, Ace & Hex). When the Doctor talked about jump-starting the TARDIS I had a sudden rush of nostalgia for the TV Movie which feels like such a distance from this story. Charley starts ranting about how the Doctor preferred it all before the Divergent Universe (didn’t we all) with the Doctor hopping around the universe with sweet, naïve Charlotte Pollard. Hooray – Charley tells the Doctor to take her home which no longer means the TARDIS.

Chameleonic Rogue: I would like to say that C’rizz gets a decent ending in this story but all I can say is that it is dramatic. He dies. That’s no great secret years after this story was released and his death scene is pretty well executed and even better the fallout from his dispatch has a damning effect on the Doctor and Charley’s relationship that gives them the only positive boost they have had since Neverland. The trouble I had with Absolution was its handling of C’rizz for the rest of the story – he is basically written out of the main plot and has a handful of scenes where he learns to channel the powers of the Dark Side before turning up at the end as an all-conquering anti God and threatens to slaughter everything. You realise with a sudden crushing inevitability that he has to die, not only because his secret is out but because this is a last ditch effort to do something memorable with the character and its as camp as Christmas and fails to work. He considers the TARDIS his home now and the Doctor and Charley his family. With C’rizz and Charley getting on so well (they are almost flirting in his room) you should figure that something horrendous is going to happen to one of them. The voices of C’rizz’s victims are reaching out to haunt him again and considering the revelation of his murderous, soul saving appetite was served up 37 releases ago you might have thought that this would have been brought to a satisfactory conclusion by now. Shoehorning C’rizz into the role of the leader of hell seems to be a desperate last attempt to do something interesting with the character and whilst it has some appeal (mainly because he is used to talking to desperate souls) his speech to the denizens of the underworld feels painfully forced. 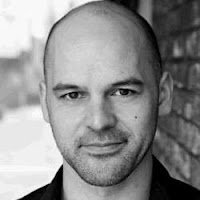 He starts to be intoxicated by the power that Aboresh coaxes from him. C’rizz genuinely believes he absolved the people he killed but it is driven into him that he damned them. C’rizz was a vessel that was created to hold the thoughts and essences of the Eutermesans after their deaths, preserving them in the hope that one day future generations would solve the problem of eternal life. Aboresh said the Doctor interfered in C’rizz’s development but he feels the Time Lord taught him that he can forge his own destiny and brought him the gift of Time. He misses L’da so much and he wants to be with her now.

Standout Performance: Its so refreshing to see Paul McGann and India Fisher being giving some decent material and in Absolution we get to enjoy them firstly with their chemistry at its best and then in the final devastating scene with fireworks exploding between them. Who knew there was still mileage amongst this pair?

Sparkling Dialogue: ‘I am not an Angel of Death!’
‘All you care about…is this wretched machine!’

Great ideas: The TARDIS is buffeted by psychic interference, confused by a good brain scrambling! I know it has been done before but there is something extremely evocative about a graveyard of spaceships. A forbidden area of space with no trespass beacons. Hellions are parasites, transdimensional creatures that home in on chaotic eddies in the improbabilities scheme. They feed on improbabilities and so the larger the likelihood of something not happening that does, the more they feast. Nice to see that there are other console rooms dotted about other than the McGann, season 14 and the white washed walled one. The Doctor has never seen anything like this with its pillars of flames, skeletal figures and airborne figures – he describes it as infernal. Probing other dimensions looking for minerals and so forth but when they saw the potential of transporting materials from dimension to another exploration was out the window and conquest was in. Transporting an army in the wink of an eye, arrive and conquer. In this dimension you live for thousands of years, everything is as it was on the day the world ended. Nobody can die or change, bodies repair themselves. Children are impossibility, everything resets and nothing evolves. Why Aboresh was fired he sabotaged the machinery that left them stuck here as souls in torment. C’rizz absorbs the power of the genetic assimilator which breaks down his genome and kills him.

Audio Landscape: Barnaby Edwards has a fair old stab at bringing hell to life on audio and there are a number of scenes that crawl under the skin with the atmosphere of horror and depravity. Screaming torments of hell, high pitched screaming creature, bashing at the exterior of the TARDIS, terrifying alien chanting, a heartbeat in the control room, the squeaky voiced Hellions, the Doctor and Charley smashing open a door, crackling fire, an almighty crack of thunder, C’rizz shattering to nothing.

Musical Cues: Deep male vocals add weight to some of the more dramatic scenes. There is the oddest of sound effects that plays between scenes, it sounds like somebody tuning a high-pitched radio and it’s exactly the sort of thing they use on the Big Finish extras. It’s really unusual but kind of effective because of it, driving home the discordant feel of the story. The drums come out in the last episode to add even more noise to all angst and screaming.

Isn’t it Odd: Whilst opening with a moody location I found the characters a little tricky to discern in the first episode and there wasn’t a great deal that distinguished them. The cliffhangers are oddly muted and considering there are scenes such as the TARDIS console exploding with blood (which would have been an tremendous ending to an episode) the moments chosen are quiet and undramatic. There seems to be some in fighting in the hell dimension but you’ll not give a damn about this subplot. Oddly for his last story C’rizz vanishes for the better part of episodes two and three. At the heart of all this bluster is a story about a family torn apart by greed and a love affair that turned sour but both revelations come from no where and lack any kind of emotional weight.

Standout Scene: The TARDIS console gorged with blood and bursting open is a sickeningly potent image, the ship trying to tell the Doctor that she is in pain as she plunges into hell.

Result: I am so conflicted over this release, moreso than any other I have listened to in the main range. It has such a wealth of good and bad elements that I should be aiming for an average mark but overall I came away with a positive feeling. In the red corner we have a fantastic hellish atmosphere brewed up by Barnaby Edwards, a long overdue conclusion to the running joke that is C’rizz, some lovely interaction between the Doctor and Charley and an ending that will take your breath away with its intensity. And in the blue corner we have a dull and unengaging plot, tedious and unmemorable guest characters and a general feeling that the idea of a trip to hell has been squandered by a writer who fails to brew up a remotely interesting framework with his fairly imaginative concepts. I don’t want to be so facetious to suggest that my good will is entirely because C’rizz has finally departed (and in a wonderfully permanent sort of way…if anybody deserved to go the same way as Adric) but I really liked the feelings it brought to the surface in the Doctor and Charley. Things are not going to be smooth for these two and finally, violently, the Eight Doctor Adventures are ripping apart a team that never worked and fling its two best characters in fascinating new directions: 7/10

Buy it from Big Finish here: http://www.bigfinish.com/101-Doctor-Who-Absolution
Posted by Doc Oho at 10:23

I kind of liked C'riss, though he did admittedly seem more interesting on paper than in execution, and certainly the Doctor and Charley never needed a third wheel. Anyway, I thought this was a bit bland of a final story. But maybe that's appropriate.

I felt like the writers wanted to elaborate C'rizz story some more but afraid that it would outshine Charley-8th story too much. I always excited everytime they revealed his darker side, like when we found out that he killed for "faith" and he talked to his victims' voices in his head—but then to be disappointed again when this revelations went to nothing in the next episode. Absolution could be a sole episode about C'rizz, but it's just another version of 8th and companions stranded in a place with political problem, being separated, and getting brainwashed for the gazillionth time.