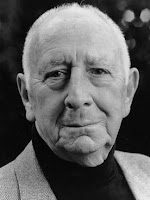 What can you tell us about your extensive work in the theatre?

I trained at RADA when I was 16 in 1949 for 2 years because it was a two-year course in those days. I worked in repertory at the West of England Theatre Company which was a very hand-to-mouth experience in those days – we used to put the sets up ourselves and it was a threadbare but very enjoyable experience. Then I worked at the Liverpool Theatre, which was three weekly rep, the longer runs were like a graduation! Then I made the big step of coming to London and worked on many television shows and films and earned my crust that way. I did a season with the RSC and that was very hard work but extremely rewarding.

One of those television stories was the prestigious Doctor Who story The Talons of Weng-Chiang. What are your strongest memories about the production?

I have very clear memories of working on Doctor Who because it was such a wonderful time and we all had such a great rapport. We got on very well, especially Christopher Benjamin and myself who had some wonderful scenes together and its jolly good thing we did because look at the stories we are doing now. I remember it was extremely cold when we were filming, it was the middle of winter and we were filming in a Northampton mental hospital because Z Cars had the studios at the time and they turned the fridges off so we could do the scenes in the mortuary where Litefoot and the Doctor examine the rat hairs and I’ll leave the rest to your imagination!

Did you realise just how popular that story and your character was?

No idea at all. You have to remember that at the time television was at its peak and I was involved in a number of very good plays for television. Not like the schedules today unfortunately. So although it was a very enjoyable time working on Doctor Who it was almost run of mill because there was so much good television being made at the time. I remember when I first realised how many fans of Doctor Who there were. I was filming on location for a television show and a man came up to me and declared ‘Professor Litefoot is very popular around these parts!’ For a moment I had absolutely no idea what this man was talking about! Then I thought ‘Didn’t I play a Professor Litefoot once?’ and suddenly realised he was talking about me! Once the fan mail started to arrive I had a much clearer idea of what an incredible following Doctor Who has.

What is it like playing the part again so many years later?

The thing with the theatre and television is that sometimes you never see people again and although Christopher and I got on enormously well we literally did not speak from the end if filming Talons of Weng Chiang right up to when we started The Mahogany Murderers. Turning up at the studios 30 years later we had a lovely reunion and literally picked up where we left off. We were asked if we would like to watch Talons of Weng-Chiang as a little refresher and Christopher and I both shook our heads in case we didn’t think we were very good in it! I thoroughly enjoy working with Christopher since we get on so very well and are theatrically in simpatico. His styles and mine are very similar and he has created such a memorable character in Jago it is a delight to be able to work with Christopher and to act in the piece with Jago.

Lisa Bowerman is the director of the series.

Lisa and I know each other from the theatre and we often pull her leg enormously at how she got the part of Ellie. She’s a fantastic director, a real actors director and has gone on to take the small part of Ellie and do incredible things with it. (I tell Trevor that Lisa has her own series for Big Finish, which has now been running for 12 seasons). Really? I didn’t know that but she is very good I am not surprised at all that she is so popular. As I said she has created a memorable part in Ellie and we all love working with her and her amazing accent in the part!

Series Three has just been released and in my opinion it is the best so far. It really feels as though the series has opened out in some exciting directions.

I didn’t realise the latest series was out already but I am delighted to hear that you enjoyed it so much. We love doing them and it’s always nice to hear that they are enjoyed. When we finish a series I often dislike going back to being Trevor Baxter again because Professor Litefoot is such a delightful character to play.

Louise Jameson’s Leela has been introduced in the latest series.

Oh she’s wonderful. Such a smashing actress and delight to spend time with in the studio. I think that having Leela in the series is especially good for Litefoot because it highlights one of my favourite things in the TV serial, the Professor Higgins/Eliza Doolittle scenes of him finding her dresses and teaching her table manners. It allows Litefoot to be charming and educational. Yes its great fun having her character back. Culture clashes do make good comedy and drama.

What are the advantages of working on audio? 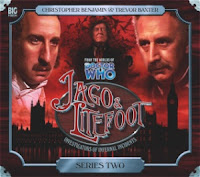 You don’t have to learn the lines! (Laughter!) No, I think it is good to be able to concentrate your entire performance and channel it into your voice. Everything is in the phrase so to speak, the whole character is there in the voice and there is nothing else to rely on. I love that the audio work is such a concentrated performance. Its rather like a string quartet, we are all in separate booths and you all concentrate on your piece in the music and it all comes together wonderfully. If we were all in the same booth or around one microphone there would the temptation to act together and to forget that this is an audio and start using mannerisms that cannot be heard. It might detract from your own performance. I read the scripts over and over at home so I have them in my head and have a feel of the piece and then when I come into the studio I am ready for however the actors want to play their parts. Preparation is the key.

Big Finish is an organisation that is run superbly and it is a delight to be at the studio. Not only to see the other actors; David Richardson is a lovely man and a pleasure to spend time with and Toby runs the studio so well. (I mention the lunches) Oh they are superb! As many studio days as I have done I don’t think we have ever had the same lunch twice! I don’t know how he does it!

What else are you working on at the moment?

I have just finished writing a play called Wonderland and have written a number of others over the years when I am not acting. Writing is a very solitary experience and I don’t enjoy it greatly and I have to make myself keep strict hours to finished the pieces. If you only did it when you wanted to you would only get a page done a year! Acting is with other people and a far more enjoyable experience. I had a play at the Albury Theatre called Lies which wasn’t altogether successful – the trouble is you need to have the right actors available to play the parts and sometimes they just don’t want to do it. My most successful draw was Kenneth Williams who performed in a play called Undertaking, which I wrote. Recently I have adapted Lord Arthur Savile’s Crime, which starred Lee Mead and Gary Wilmot and a number of wonderful actors, which was very enjoyable.

Have you listened to your own Jago & Litefoot stories?

I have, yes. I have series one and two which I have enjoyed listening to – its such a new experience because so much of the work is done after we have been in the studio with the post production and music. I think the end results have been brilliant, very evocative of the era and good yarns! I am very happy they are being received well.

Trevor thank you very much for your time.

It has been entirely my pleasure.

The third season of Jago & Litefoot is out now and it can purchased here: http://bigfinish.com/Jago-and-Litefoot
Posted by Doc Oho at 10:18

A great actor and a gentleman.

Agreed with the above!

May I ask how you managed to contact Mr. Baxter? I'd dearly like to write him one of those fan letters myself :)

Oh, my mistake! I'd forgotten I'd asked on the other page, I thought the form hadn't submitted or something.