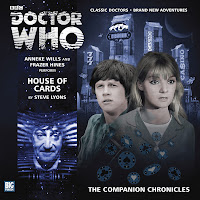 What’s it about: The TARDIS has landed in a futuristic space casino, where the Doctor, Ben, Polly and Jamie find fun, games… and monsters everywhere. There are vicious robot dogs, snake-headed gangsters from the Sidewinder Syndicate and a mysterious masked woman called Hope. In this place, time travellers are to be tracked down and arrested. Yet, as events spiral out of control, time may be Polly's only ally…

Lovely Lashes: Everywhere they go there seem to be monsters but in this case it is simply an alien race frequenting the casino they are visiting. She’s always hated snakes and these gangster-style aliens rather unfortunately resemble them. Polly can’t press a button that could end a mans life (especially when it might be Ben’s). She just doesn’t have it in her (had Leela been taken to the casino she would have pressed as many buttons as possible and bugger the consequences). When it comes to it Polly is a lot more resourceful than you might think, ignoring her choice to murder one of the gamblers and activating a time bangle to escape. She’s not one to miss an opportunity either, pick-pocketing Hope’s casino chips when she isn’t looking.

Who’s the Yahoos: His innocent period where he was agog at the wonders of the universe opening up around him and rather swamped by the domineering presence of Polly and Ben, nevertheless this might be the period where Jamie is at his most endearing because everything is so new to him. His protective to streak for the ladies is going to get him in trouble time and again if all it takes is long lashes and short skirt to convince him of somebody’s innocence. He is completely hoodwinked by Hope and pays for his interest.

Able Seaman: Ben is having great fun availing himself of the facilities and rubbing Pol’s nose in the fact that he has managed to cut loose and have some fun whilst she is the uptight one for a change. Either the house is cheating or he is a terrible gambler but he manages to fritter away their money in record time! He clearly has the gambling bug, that in built addiction that forgets to kick in when enough is enough and this is one casino that knows precisely how to lure you in and keep you interested. He just can't take his eyes off Polly, she's always getting into trouble when his back is turned.

Oh My Giddy Aunt: Its one of those stories where the Doctor barely appears which isn’t as much of a hindrance as you might think with Polly, Ben and Jamie being one of the most endearing and engaging teams. However he takes centre stage at the climax (as is his right) where he gleefully produces a deck of Happy Families cards to play his hand against the House. Its pure, unadulterated Troughton and it had me grinning from ear to ear.

Standout Performance: I really enjoy the Companion Chronicles where two of the actors from the classic series narrate together, it gives the story a sense of versatility and freshness. I’ve noticed with the Anneke Wills/Frazer Hines adventures that the former gets the larger slice of the action but that is understandable considering Hines gets to perform against Wendy Padbury as well and has also enjoyed a foray into the Main Range and the Lost Stories too. Wills throws herself into each story wholeheartedly and still has that perky charm and sense of adventure that made Polly such a treat on screen. Hines I find the more versatile actor though, more convincingly playing the extraneous characters (his take on the cowboy and the Doctor is superior here). But the overall effect is delightfully entertaining, both actors getting into the spirit of the story with ease.

Sparkling Dialogue: ‘That’s the nature of the game…’
‘I never go anywhere without a spare Mrs Bun up my sleeve for emergencies!’

Great Ideas: Its great to have some kind of crossover between the new and old series and Lyons catapulting his terrifically fun aliens from the Doctor Who Adventures comic strip across to Big Finish audios is the sort of backhanded transfer that Cardiff would barely even register. They are such black and white monsters, storming bars and banks and using violent force to get their own way. The sort of alien you can really hiss at (but they may hiss back). I love the idea of a space casino with a croupiers that looks like playing cards! Free credit is available at this casino but it comes at a cost. The Sidewinder boss is a very beautiful woman…but don’t let her looks deceive you! In the ceiling of each of the players booths is a disintegrator ray but their functions have been randomised and nobody knows which buttons connect to which booths. Press a button and one player will die but the other will be freed and their debt cancelled. Polly declares the game monstrous but from the audiences point of view (who have no stake in the deaths) it must be the ultimate game of chance, a truly tense and bloodthirsty experience. Its always the one who looks the most innocent that you should keep your eye on. With so many crooks about its easy to move your attention on from Hope so it should come as no great surprise to learn that she is the swindler trying to cheat the casino. 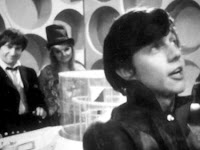 Musical Cues: My favourite casino themed score is still DS9’s Badda-Bing, Badda-Bang (it won an award it was so good) but Daniel Brett makes a good attempt at capturing the tone of this piece and mostly succeeds. Its occasionally cheesy (but this so is the story) but he scores a win in the second episode, especially with all the giddy running around.

Isn’t it Odd: As much as I enjoyed House of Cards (and even more The Selachain Gambit) I wouldn’t want all the season four adventures to feel as though they have to capture this frothy tone. Resistance (also by Lyons) worked so beautifully because it bucked against the trend and produced a hard hitting historical adventure. What I would love to see is the Peter Purves and Anneke Wills stories have a swap. The season three companion chronicles (superb as they are) often capture the dour, serious atmosphere of the darker stories of that year whilst ignoring the strengths of the heady comic gems of the time. So let’s see Purves letting his hair down, Gunfighters style whilst Wills engages with more dramatic material. With The Early Adventures on their way this might be a very real (and much welcomed) possibility. I liked the conceit of the time bangles and Lyons does play a few fun tricks with the ability to jump backwards into the narrative but given his past form of temporal jiggery pokery (The Fires of Vulcan, Colditz) it was nowhere near as intricate or as clever as I thought it would be.

Standout Scene: I was chuckling away at the Happy Families conclusion although it is worth noting that another Big Finish Adventure (The Raincloud Man) has played out this exact scenario right down (although there I think it was Top Trumps) to its mock intensity over such a frivolous pursuit. But any story that can see the Doctor triumph in such a frolicsome way has to be worth a look.

Notes: I approached House of Cards with a heavy heart not long realising that my favourite range from Big Finish is about to come to an end. I think the idea of full-cast, expensively produced stories for The Early Adventures is a fantastic idea (anything in the style of Farewell Great Macedon works for me!) and I completely understand why they wouldn’t want to run them and the Companion Chronicles side by side. I even get that all good things must come to an end, that there have been a huge number of this range produced and that the writers must be running out of first person narrative tales to tell with the same characters being churned through the factory. They have done character arcs, one-off specials (Peri, Evelyn, King Peladon), trilogies and have even gone as far as experimenting with villains from the main range (Lysandra) and rifts on the stage show (although I really wish they hadn’t bothered with the latter). Its just that this series has been so consistently excellent, they have been the perfect length (60 minutes) they have had the input of some of the best creative hands that Big Finish has to offer (with Lisa Bowerman directing and Yason and Fox handling the sound design and music you know you automatically have a winner) and they have been driven by a creative producer (David Richardson). Its emerged as the range that I look forward to ever month. So I’m happy that there is over a years worth of stories still to come but it does make me sad to think there will come a time when I don’t look forward to a new companion chronicles every month. Let’s raise a glass to this incredible range as it counts down to its end…

Result: Great fun, even if it does feel like it is trying to recapture the sunny atmosphere that made The Selachian Gambit (which is referenced) such a surprise hit last year. Featuring a groovy location that immediately captures the pleasurable tone of the early Troughton’s (a space casino), an array of imaginative aliens for this delightful foursome to interact with and a plot which fizzes with imagination (a time travel alarm?),  House of Cards is not a story that you will have any trouble letting wash over you when you are feeling low. It feels very right that the story should feature the Sidewinder Syndicate from Doctor Who Adventures because this has a real comic strip feel about with heightened danger, larger than life characters and broadly drawn situations. Wills gets the lions share of the action but Hines pops up often enough to feel as though Jamie is getting a fair slice of the pie, and there are some great moments for Ben too who (thanks to the absence of Michael Craze) can sometimes feel sidelined. Like plopping a mentos into a glass of coke, House of Cards is fizzing and frothing with life and good humour and will happily fill an hour of your life with fun space-faring adventuring. I enjoyed it a great deal and the news of a third story with this exact team (Wills, Hines, Lyons and Bowerman) can only be welcomed: 7/10