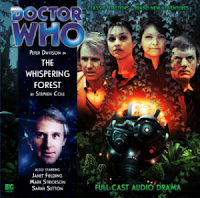 What’s it about: The TARDIS arrives in alien woodlands, where a small group of humans hold tight against the menace of the Takers – strange creatures who come by night to spirit away members of their settlement. But if there’s one thing that the inhabitants of Purity Bay fear more than the Takers, it’s the dirt and disease spread by strangers. Strangers like the Doctor, Tegan, Turlough and Nyssa… The fanatical Sister Mertil and her hygiene-obsessed acolytes are victims of a terrible corruption – but not in the way they think. Only the whispering forest knows the truth…

An English Gentleman: There’s an amusing reference to the length of the Doctor’s hair which was at its all time most hippyish in season 20. One thing you can be sure of: things change around the Doctor. Sometimes you’ve got to love the differences between the fifth Doctor and Sixie. The former punches somebody and apologies politely whereas the latter would have throw his whole weight into it and probably belly slammed him for good measure.

Alien Orphan (the Older): Within this foursome pairing up Nyssa and Turlough is the most original thing you can do since they barely clapped eyes on each other in the TV series.

Mouth on Legs: ‘Exploring a dark forest in the middle of the night on a world where anyone we meet might have space rabies?’ is one of the first things that Tegan says when she walks out of the TARDIS. Not ‘ooh nice planet’ or ‘just feel that breeze on your face’ or anything remotely positive. Oh no. It takes Tegan ten minutes to suggest they get back to the TARDIS. Does she literally want to spend all her on the ship? Where is her sense of adventure? ‘I’ve got such a headache!’ blah blah blah… ‘This whole place gives me the creeps!’ yaaaaaawn. Cole can’t quite keep it up though…as much as the script editor might want him to write Tegan as abrasive as possible she becomes much more pro-active as the story progresses. In this case that is a relief because she drops the attitude and gets on with servicing the plot in an positive way. She gives some of her strength to Sasha when she starts doubting herself and its probably the kindest thing I have ever heard Tegan say. By the end of the story she has dropped the attitude and is genuinely engaging with the story (a shame it isn’t really a story worth engaging in but points for effort) and asking the right questions. I love that she gives strength to Anulf as well, reminding him to focus on pulling his community together rather than falling to pieces at the first hurdle. Tegan is even concerned about somebody else for a change, reminding the Doctor that families and childrens lives are at stake.

Alien Orphan (the Younger): Nyssa has a similar moment to the one in Cobwebs where she comes face to face with a situation that approaches medicine that is completely alien to her. 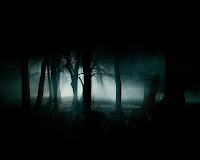 Standout Performance: Remember in Cobwebs when I said that Janet Fielding’s delivery is believable in about one in three lines? In episode one she has trouble saying the word ‘bye!’ with conviction. How is that possible? It’s something we all say all the time! Listen to when Fielding is given more casual dialogue to speak, like when she is providing succour to Anulf and Seska. Suddenly she sounds perfectly normal. That’s how to do it, not transforming her into a wailing banshee all the time.  It might be that I’ve just listened to The Crimes of Thomas Brewster and the Key2Time trilogy on the trot but is it my imagination or does Paul Shelley sound an awful lot like David Troughton?

Sparkling Dialogue: ‘Let us kill the spike haired girl!’ – I was literally screaming ‘Do it! Do it!’ but alas my cries where for nought.
‘The sickness is in you. Its all you’ve ever looked for’ – there is an attempt to explain away Mertil’s bad attitude at least. Doesn’t stop her being any less irritating though.

Great Ideas: The Doctor asked the TARDIS to prick up her metaphorical ears and see if she could detect any mentions of Rictus syndrome and take them there. The scenario of a medical team trapped in a forest settling down and turning their profession into a religion over time with a culture emerging that obsesses over cleanliness (just as a surgeon would) is nice. But its highly unoriginal to anybody who has seen The Face of Evil which is built on precisely the same premise with the emphasis instead being placed on the instinctive and intelligence of a survey team. The Shades were once living beings but turned by some cataclysm into revenants. They are the colony’s ancestors, 44 patients with suspected Rictus syndrome were quarantined and euthanised when no cure was found. There was an energy blast when the burning of the bodies too place, an out rush of intr-dimensional energy tearing through different layers of reality, mauling mind and matter and creating the Shades. Living ghosts forged in the fallout of some tremendous explosion. All this time they have just been trying to talk to them. Ooh scary.

Audio Landscape: With its jungle noises screaming out at you from the off there is more than a little touch of Kinda to this story aurally (and quite a nice touch considering the next tale). Snapping branches as they tear through the forest, scrubbing hands, whispers in the air, the wind at the top of the cliffs and the waves crashing down below, a rive rushing by, Nyssa and Turlough fighting against the current, a disgruntled crowd, medical computer voice, a sparking console. 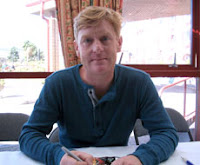 Isn’t it Odd: Three is too many. There I said it. Unless the writing is exceptionally good (there would be a couple that are the exception to this rule in the nine stories to feature the 5th Doctor, Nyssa, Tegan and Turlough) or there is the time to explore all of their reactions (the reason the 1st Doctor, Ian, Barbara and Susan/Vicki worked so well is that the stories were longer and slower and allowed them all to have a slice of the limelight) one of four regulars is always going to end up short changed. Given that Nyssa has achieved a new sense of dominance and that Tegan doesn’t go anywhere quietly it usually falls on Turlough or even the Doctor (heaven forbid!) to take a back seat and allow the others to take centre stage. It should never be the way. In the case of The Whispering Forest, Nyssa and Turlough suffer the same as Turlough and Tegan did in Terminus but instead of wandering around aimlessly in ventilation ducts they are left to circumambulate in the forest. I do appreciate it when writers go to the lengths of creating a new form of diction to show articulately how different things are in this time but Cole adopts a rather melodramatic flair for his characters cod-religious dialogue which then encourages melodramatic performances. Everybody talks in bizarre expository terms that don’t sound terribly natural (‘I will return to Purity to give my husband’s people comfort at this difficult time!’). ‘This stuff tastes pure as a mountain spring…’ – does anybody actually talk like this? Mertil is so completely over the top in every scene that there wasn’t one point where I could invest in this character. What is the obsession with these characters that are always angry (‘you naïve little fool!’). Is she supposed to be so unbearable that the contrast with Tegan makes Ms Jovanka more tolerable? The politics of this world are far too argumentative, talky and cod-SF (plenty of ‘I am my fathers daughter and you will listen to me!’ nonsense) to buy into. When politics are written in the form of clever plot mechanics and subtle dialogue it can be very intelligent viewing (The West Wing for example) but when its just a bunch of people standing around bitching its just waffle. ‘ We know the Takers take! What else is there to know?’ – oh dear… There is something very bizarre about crowd mentality in science fiction communities. They seem to be the most easily swayed groups of people depending on how the plot needs them to react. So in one breath in The Whispering Forest they are condemning the Doctor and Tegan and attempting to murder them but in the next they are accepting of them. All very weird. Because they have been wandering about the forest and doing nothing of note for two episodes Nyssa and Turlough have to discover all the things about the community in part three that the Doctor and Tegan did in part one. Déjà vu? The cliffhangers to episode two and three are the dullest kind of false jeopardy, moments that spring up to serve no purpose than to be a cliffhanger rather than growing organically from the story and they are resolved in seconds in the most banal fashion. In a quirk of technobabble the story is over with nobody doing anything especially clever and even Tegan mentions how neatly it has all worked out. Ho and hum.

Standout Scene: The twist reveal that Purity is based around a vast medical ship is probably this story’s most effective moment. Until you think about how many times this sort of thing has been done before. The scene where Turlough booms through the colony as the voice of the Shades was absolutely hilarious for all the wrong reasons. Has the story really sunk to the level of channelling The Underwater Menace? The ending is spectacular for sure and really encourages the interest for the next story.

Result: I’m coming to the conclusion that achingly traditional stories simply aren’t my cup of tea because I found my mind wanting to wander throughout much of The Whispering Forest and I had to force myself to keep it on track. It’s not a bad story, per se, it’s just commonplace with very little that you wouldn’t have seen elsewhere in Doctor Who done with a great deal more oomph. It’s not even that indicative of season 20 which, for all its flaws, is a time of the thematic exploration of some quite weighty scientific ideas for the show. Beyond The Kings’ Demons there is little that year which is as conventional, plot wise, as this story. Whilst the story plays out along familiar lines (monsters in the forest – Nightmare of Eden, Planet of the Daleks, a colony that has been seeded by a crashed spaceship – The Face of Evil, Frontios, cod SF politics – Meglos, Arc of Infinity) it’s weighed down further by unbelievable dialogue (everybody talks as though they are imparting notifications all the time – ‘we must deal with my step-daughter and the strangers!’ or ‘so this is how the Takers keep taking!’) and weak characterisation (not so much the regulars because even Tegan is well handled for the most part here, but the guest cast fail to inspire) and a resolution which fails to bounce (the nature of the Shades is easily guessed). Valiantly trying to breathe some life into all of this is director Barnaby Edwards and Fox and Yason taking care of the sound design and music but it’s not their best work by a long chalk and adds to the feeling of dissatisfaction.  The Whispering Forest has some pretty hefty credentials propping up what is a very suspect script and like many an episode in series six of the new series it tries to convince you with a riveting cliffhanger that it is a lot better than it actually is: 4/10