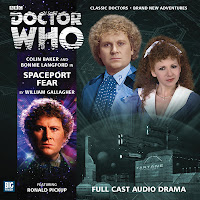 Softer Six: 'There's a whole universe we could be racketing about in!' Skipping from a run of fifth Doctor stories to the latest sixth Doctor one exposes just how effortlessly this Doctor falls in with whoever he happens to be travelling with or meets in his travels. Its either Colin Baker’s natural bonhomie or the way he is written so confidently but he seems to skip into any given situation and find his place effortlessly (the fact that usually means at the top is purely a co-incidence…yeah right!). The Doctor is not always welcomed but people always warm to him eventually. He’s been known to light up a room (Mel points out with his coat of many colours!) and he never, ever hides. Mel can’t argue that he is in a class all of his own. The Doctor is uncharacteristically modest about how quickly his eyesight returned…perhaps he really is softening up. There’s a lovely cuddly moment when Sixie uses The problem with thugs is that they have no imagination and fortunately the Doctor has plenty in reserve to elude them. His philosophy is to trust everyone until they give you reason to assume otherwise and he’s hardly ever been proven wrong. 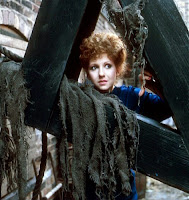 Computer Programmer: Remember when Ian Levine had a paddy (you’ll have to sift through the multitude of examples) because Bonnie Langford was cast as Mel and refused to have any more to do with the programme? I wish we could get him to listen to this story (unfortunately he has declared Big Finish a no go area because they don’t play by his rules) because you can see just how savvy JNT actually was because Colin and Bonnie compliment each other perfectly. There’s no false friction (aka Five/Tegan or Six/Peri) and there’s no melodramatic backstory driving a wedge between them (aka Seven/Ace) but instead it’s mutual respect and a comfortable friendship. They just work, either its thanks to the chemistry of the actors or the strength of the writing but listening to them investigate and puzzle out the mystery of Tantane Spaceport is simply very engaging. They travel through all of time and space and they haven’t even got a window – Mel would like to be able to look out the door every now and again and see the times and places they are passing. The Bush family missed Andrew and Fergie’s wedding  because her nan put her television in a cupboard and lost the key! The Doctor tells her the sad truth about their split and she laments that she thought they were as strong as Charles and Di! When it comes to computers, she is the expert and she budges the Doctor out of the way to make herself as useful as she can be. When the Doctor suggests they give up Mel is having none of it…even if she isn’t too thrilled at about being trapped in the dark. Showing that she hasn’t entirely lost her sense of fear but proving that she is written with more courage than on television, Mel walks into cobwebs and makes her feelings known but doesn’t scream.  She wont let Naysmith wander the corridors alone and fearlessly opts to go with her. Her eyes adjust rather quickly but then she drink a lot of carrot juice! Mel is precisely the sort of person that you need around when trying to deal with something as agonising as losing your mother. She’s sincere in her sympathies but pragmatic enough to know that they can’t hang around and share the same fate. Mel’s eidetic memory comes in handy since she has memorised the map of the Spaceport for their travels. ‘Wi-what?’ Mel questions and its lovely to be reminded that she comes from a time before Wi-fi and other technological developments. When the Doctor suggests that diplomacy and tact are needed to greet the Wailers Mel points out that she better come with him! She tries to make Elder Bones remember the effort he has put into the last 400 years and that these are his people he is putting in danger but her efforts fall on deaf ears.

Standout Performance: I love Beth Chalmers and think she always manages to give a terrific performance but since the advent of her playing Raine it’s a little hard to distinguish her as being anybody else. And she has always had a ring of Bonnie Langford about her too so its doubly confusing. Ronald Pickup’s harsh, gravelly voice is perfect for audio and he plays the sly Elder Bones with just the right amount of ambiguity so you’re never quite sure whether to trust him or not. When he wants to show his teeth, he’s quite terrifying (the scene where he tried to convince Halpan to surrender her gun gave me the heebie-jeebies). A terrific audio villain.

Sparkling Dialogue: ‘Are you Business or Economy?’ ‘Madame I am always First Class!’
‘Nickname: lose the two goons, please.’

Great Ideas: We’re back in Face of Evil territory again with a contemporary establishment (customs) being the seeding ground for a colony to build its theology around. What makes it different from the similar state of affairs in The Whispering Forest is that the community on Tantane Spaceport are aware of the fact and thus the entire story isn’t built around revealing their legacy. But the way the dialogue is twisted to have an imaginative customs-themed edge recalls Paradise Towers too (‘I have something to declare…’ and ‘carry me on!’). The way the location is split up into areas like Arrivals, Baggage Reclaim, Immigration, Duty Free and Security and the people are divided into Economy and Business is a simple but effective way to build up a vivid picture of the Spaceport. The rooms keep changing shape whilst people stand in them, as if the walls are trying out new structures, new perspectives. It reminded me a little bit of Cube, and carried the same feeling of claustrophobia. They call it summer when the lights snap on, another lovely idea. The lights are always on standby like they are saving the energy…but what for? When it comes to talk of Economy and Business working together we were definitely in Paradise Towers territory. Elder Bones has guided nineteen generations of Economy since Business brought the Wailer to them and trapped them inside the Spaceport. However he has also guided nineteen generations of Business, keeping the status quo intact so he get switch the damn forcefield off. He’s been trapped inside the Spaceport for 400 years and in all that time his people have been trying to get at him. The Wailer in the Spaceport is a baby and the reason they have been waiting to break in is to reclaim their young. If Elder Bones hadn’t smuggled the Wailer into the Spaceport, plotted to use it as a weapon of terror against the Shargrain just as their ship touched down at the Spaceport. Tantane customs spotted them and the whole place went into lockdown, the Wailer fleet began their bombardment to get their young one back and 400 years later this is the unhappy situation. I rather like the idea that the one death at the hands of a Wailer was the work of a frightened child retreating into the shadows whereas the real threat comes in the form of the man who is supposed to be holding this place together.

Musical Cues: Immediately dramatic and tense (it sounds like Yason and Fox are bashing metal sheets for effect), this is why I always throw plaudits in this duos paths. The music is pretty relentless throughout Spaceport Fear but just play the isolated track to hear how atmospheric it is. Its been an age since I’ve been disappointed by a Big Finish score.

Isn’t it Odd: William Gallagher sure has a weird way with names…first Toasty and now Pretty! I’m not sure which is more I’m-a-celebrity-and-I’ll-call-my-kid-what-I-like! Speaking as somebody who is currently studying gender dysphoria as part of a psychology course calling your son Pretty would have a serious influence on his gender identity as he grows up.

Standout Scene: I really liked (although that really isn’t the appropriate word) the end of episode two because for once it wasn’t the Doctor or his companion walking into some false jeopardy that is easy to work their way out of simply for a pause in the action. This time death is on the cards and it’s of a character that we have faithfully followed for two episodes, at the hands of the unseen horror that has been lurking in the background and most horribly of all in front of her son. It’s a startlingly dramatic way to leave the story for a coffee break (or is it just me who does that at the cliffhangers?) and a shocking way to return to the story too.

Result: Episode one is so agreeable I was wondering if Spaceport Fear could maintain its momentum right until the end and it has a damn good stab at it. On its own the first episode is 25 minutes of glorious scene setting, intriguing ideas, well paced action, imaginative dialogue and subtly scary sound effects. It’s a very easy story to leap into and start running. Come episode three we are still experiencing the story in real time, on the run with the Doctor and tiptoeing past (apparently) obscene monsters with Mel. Once again Barnaby Edwards proves he can direct these stories like no-one else and the pace is relentless, expertly jumping from one set piece to the next, to one additional clue of the mystery to the next. Everything climaxes rivetingly at the end of episode three as the shields come down and the Wailers flood the Spaceport and secures this tale as knockout adventure material. Gallagher has proven an expert at misdirection, pointing us in the direction of the Wailers when we should have been focussing on Elder Bones. It all comes down to whether Ronald Pickup is up to injecting this character with the right amount of ambiguity and menace and come the finale he was literally giving me the chills. I really enjoyed the unusual location, the mystery at the heart of the story and the simple pleasure of listening to Sixie and Mel investigating together once again. Sixie slips in effortlessly to this location and takes charge but it is the characterisation of Mel that stands out. Part Paradise Towers, part The Face of Evil but with an energy and dramatic force that neither of those two posses, Spaceport Fear continues the excellent run of form that has greeted Bonnie Langford’s return to Big Finish. Because of all of these strengths: 8/10
Posted by Doc Oho at 14:30

Do you create the photos in your reviews too Doc? That Colin one is beautiful!

No, I have no photoshopping skills whatsoever. I found it on Google images. Lovely, isn't it.

I believe this story is set immediately after The Wishing Beast. Don't hold me to that, though!

I love your reviews (spend far too much time reading them during working hours!), I tend to agree with you most of the time too... Just finished SpacePort and about to start Seeds of War. Don't want this trilogy to end. Langford & Baker are just so damned good!

Thanks Ian, you're a charmer. I can't believe it will be another year before another Sixie trilogy - except the Sixie/Peri story in the 63 trilogy later in the year.

Oh, that's great news, didn't know Six/Peri were gonna be in the 1963 stories!

Also looking forward to the Destiny of the Doctor one that Nicola is doing. "Peri & The Piscon Paradox" is one of my fave CC's.

God knows when we'll get Mel/ Six again... hopefully not another 5 year wait!

Just picked this up and really enjoyed it. Great review. RIP Ronald Pickup.