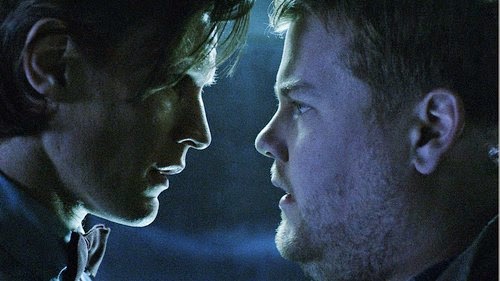 This story in a nutshell: Craig is back and so are the Cybermen. One rocks and the other sucks…

Nutty Professor: How many people watching this wished they had the Doctor’s magical ability to stop a baby crying in an instant? There is a brilliant moment where Matt Smith seems to be channelling Tom Baker’s quirky performance and picks up a pepper grinder and starts grinding it over Craig’s back for no apparent reason. There’s no point in the Doctor telling himself not to notice things and just go…he is attracted to a mystery like a moth to a flame. Once the scientific advisor to the most powerful military force in the world, now the Doctor is an assistant in the toy section of a department store. Pleasingly he seems much more at home in the latter. It’s a gratifying sign of the times that this story can feature the Doctor giving a man a back massage and then flirt outrageously with him to take his mind away from the fact that he has just been teleported. Also that the Doctor’s affection with Craig makes Lynda Baron’s character think they are a gay couple. I know some people will be horrified that this sort of material can be transmitted on a family TV show (the sort of people that recoil at the though of Hartnell doing this sort of thing) but sending a positive message about homosexuality and getting kids to laugh about it in a positive way is bold and uncompromising and makes me proud to be a Doctor Who fan. The Doctor admitting that people talk if you have a baby and that is why he takes a human around with him is hilarious. Makes sense of why he kept Amy around for the past two seasons anyway. The Doctor finally gets to pour his heart out to a worthy recipient – Stormageddon! You would be hard pressed to find a scene more heart-warming than the one where he lights up the baby’s room with the star scape. When he was younger he used to look up at the stars and he managed to get out there and live his dream. This is actually a pivotal moment for the Doctor, one where he states that he has lived a full life and grown so old doing it. 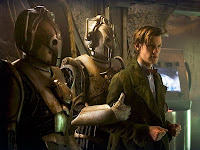 Sparkling Dialogue: ‘Alright don’t have a go me just because I don’t know the names!’ – I don’t know why that made me laugh so much, I think it's Corden’s sulky delivery.

The Good: Given the success of last years episode The Lodger it makes perfect sense that they decided to bring back Craig for another show and I have to admit I was quite excited when I saw the trailer because James Corden brought out the absolute best in Matt Smith last year. There’s was an unconventional bromance that dazzled because Corden got to play the straight man against Smith’s batty Time Lord and by the episodes close I was rooting for Craig and Daisy to skip into the TARDIS and the Doctor to kick Amy out. I tried to resist for as long as I could but in the end he wore me down with his irresistible charms…Stormageddon is so bloody cute I just want to cuddle him all over! Whether he is just being cute or he can really talk baby the episodes best gags come when the Doctor translates Alfie’s gurgles and the idea that he calls all people either ‘not mum’ or peasants is a laugh riot. Craig tries singing to Stormy when he is crying and the baby thinks that his dad is crying too. This is far funnier than I remember with a gorgeous gag about missing people being relegated to the middle pages of a newspaper because the latest contestant to be kicked off Britain’s Got Talent dominates the first page. Am I the only person who gets s giddy thrill at seeing Lynda Baron return to Doctor Who? Captain Wrack has hung up her cutlass and entered the perfumery business. It’s a lovely turn by Baron who isn’t called on to do much but share some enjoyable scenes with Matt Smith. The chavvy shop girl promises to be an incredibly annoying character until you realise that she is the punchline of the underdeveloped shhing joke and that made me grin from ear to ear. Amy and Rory make a nice cameo (on our first watch I think this was the only point Simon paid attention) and the advertising board had some lovely touches (Petrichor from The Doctor’s Wife especially) although seeing them reminded me precisely of what I wasn’t missing. Craig tears down the fourth wall by saying what we have always through about the Cybermats, that they are damn cute! Cue horrid yellow smokers teeth emerging from the metal casing... The Doctor is finally down with the kids, stating ‘don’t worry I have an app for that!’ Sometimes it is impossible not to love Doctor Who and any show that offers up two grown men trying to fight a tiny metal rat with a frying pan and a baby is happily one of those moments – it's absurdly silly and quite wonderful. I think I would have been far more forgiving of the Cyber element of this episode had it just been about the Cybermats. It’s a light episode so it needs a light plot and they could have had great fun playing about with the idea of these cute metal toys being taken into kids homes and turning nasty. Perhaps that would put parents off buying them for Christmas but it would be great fun preying on consumerism so playfully.

I told a lie there was one other point where Simon got quite excited and that was when he thought that Craig was going to be converted into a Cyberman and it is a genuinely tense sequence. I never thought they would go as far as they did and the Doctor’s hysterical confession about his death was saved for exactly the right moment. Unfortunately this led to the solution of which you can read my thoughts on if you skip over to the Bad section. And it looks as though I have lied for a third time because Simon also loved the last scene that sees River being put into place to kill the Doctor at Lake Silencia. What a wonderfully foreboding sequence (and Frances Barber is outstanding) but wedged in at the end of Closing Time goes to show how arc related this season has become. Casual viewers are expected to know how this is related to the 40 minutes of Cyber action they have just seen. This is the first time that the new series hasn’t made its penultimate episode a staggeringly dramatic lead in to the finale and perhaps that was a mistake because the closing feels completely out of place with the rest of the episode (and I would have happily have sacrificed Night Terrors to slip this episode in that slot!).

The Bad:  Could there possibly be a clearly example of a marketing strategy than featuring a toy Cybermat zooming through a toy store? If they aren’t on the shelves at Christmas I’ll eat my hat! What a shame that these desperate, body snatching Cybermen look scarcely different to the usual sort. A bit of grease around the eyes and the odd wire hanging out was all I noticed when I hoped for some decent body horror. It's odd that the last three stories promoted the idea that proximity to the Doctor leads to suffering and death and yet Closing Time takes the complete opposite approach with Craig suggesting those who stay close have a better chance of survival. Which is it to be? That is the most inept guard ever seen in Doctor Who (and it is a much sought after title!) as Craig and the Doctor are clearly visible and audible when he walks past them after closing time. It's when you start dealing with crashed Cyber spaceships under a department store that you have to wonder if Gareth Roberts hasn't bitten off more than he can chew. This is the second time in season six where parental love has been used as a deux ex machina (literally interpreted means ‘a seemingly inextricable problem is suddenly and abruptly solved with a contrived and unexpected intervention’ - this both contrived and unexpected in the worst possible way) and this is even more gut poisoning than the first attempt in Night Terrors. The Cybermen have proven vulnerable to gold, badges for mathematical excellence, coins, arrows and now to add to the list…fatherly love! I appreciate the sentiment but it is layered on so thick that I felt as though somebody had forced me to eat a whole tin of treacle.

Result: Cybermen in the fitting room, the Doctor in a gay relationship and a baby that wants to take over the world – we are definitely in Doctor Who sitcom territory. Closing Time turned out to be the biggest revelation of my re-watch of season six because I didn’t think much of it upon transmission but with the benefit of hindsight there is actually plenty to enjoy in this episode. Unlike much of the season it is a light affair and is packed full of jokes and great lines that are far funnier the second time around. Stripped of Amy and Rory, the Doctor is a joy to be around; witty and wonderful as he translates baby speak and flirts with Craig. Smith’s chemistry with Corden is a delight to watch once again. The only thing that really annoyed me was how totally rubbish the Cybermen were but let's be honest they have long since been the butt of Doctor Who’s joke. One of these days somebody will write a scary, psychological masterpiece for the Cybermen but when a writer is squeezing them into an episode full of cutie wutie babies and jokes about Britain’s Got Talent, Gareth Robert’s mind is clearly on other things. It’s a shame that their dreadful treatment should put such a dent in the episode because otherwise this is exactly what we needed, an amusing breather before the dramatic finale. Closing Time is flawed but I was surprised at how much this sitcom style Who kept me smiling and although he is probably too busy I certainly wouldn’t object to Corden becoming a full time companion. Craig strikes me as more of an identification character than either Amy or Clara: 7/10
Posted by Doc Oho at 19:31

I absolutely love Craig's character and I would gladly exchanged him for Amy any time of the day. Why could't the Doctor's TARDIS crash on Craig's garden in The Eeleventh hour? :D

Wouldn't that have been great?

I agree with you about the overly sentimental ending. "Fatherly love" made me want to throw up. Personally, I think anger would have been a better emotion. "Fight it, Craig! Fight them! DON'T LET THEM TAKE YOUR SON!!!" And then Craig "Hulks out" and bursts out of the conversion thingie and starts smashing up the place.

A satisfying transition for Craig, too, since a significant part of the transformation into full Adult Manliness is accepting the role as protector of your family.

I thought this was decent enough, largely due to Craig and the Doctor's great chemistry, but the Cybermen drag it down (as usual), and the ending was basically the same as the last Craig story, only with fatherly love replacing romantic love, which made it feel like a retread.