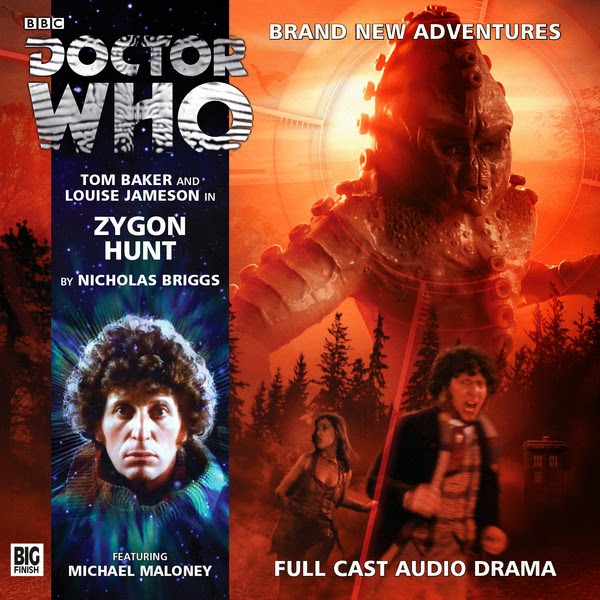 What's it about: On the jungle planet Garros, Earth Forces Knight Commander-in-Chief Greg Saraton and his team are hunting gigantic beasts, for sport. When the Doctor and Leela arrive, they are caught up in a web of intrigue where there is no clear friend or foe. What is Saraton’s vital connection with Earth’s Solar System’s Defence Shield? Why are the giant reptilian birds of Garros attacking? What terrible secret lurks deep within the trees? Before the truth can be revealed, a heavy price will be extracted and loyalties will be tested to the limit.
Teeth and Curls: Pointing guns is normal human behaviour in the Doctor's eyes. His quite proud of some of his muddling through...and there is no other person he would rather have at his side when muddling through than a rather headstrong savage. The final scene between the two characters is uplifting because it is played and scored so well but it feels like a backhanded moment of character to end the season on rather than a culmination of a seasons worth of development. The King of Sontar and White Ghosts teased that this season would take the Doctor and Leela on a self reflective journey but it pretty much begins and ends with those two stories and from The Crooked Man onwards we are back into 'the Doctor and Leela have a jolly adventure' territory. Whilst there is nothing wrong with that approach and some might enjoy it, there is so much potential to probe these characters further that is being wasted.

Noble Savage: Leela is sensitive to the Doctor's gentle mockery but he tries to put her at ease. She will depart the TARDIS now and judge a situation by the weather and what she observes, rather than simply relying on her instincts. The Doctor asks her if she is homesick after she states wistfully that this place is much like her home. She talks knowledgably and wisely about hunting beasts, something that she is intimately acquainted with knowledge in.

Great Ideas: Every time I heard 'Knight Commander' I kept thinking of Battlefield. Elunas has the access codes for the defence shield and holds the very survival of humankind. He has kept the solar system safe for nearly three straight decades. Gregor Saraton is a war criminal. The trouble with deep cover operations is that you are always in danger of going native as Mina does here.

Audio Landscape: I honestly don't see how anybody can say that the 4DAs aren't purely going for a nostalgia kick. Zygon Hunt opens with several authentic sound effects lifted straight from Terror of the Zygons plus a Geoffrey Burgeon-esque score. Shut your eyes and you could be watching Terror unfold. The activation signal, the organic technology purring, laughter, a car growling, a shot fired, a screaming bird, trumpeting creatures, flowing waters, firing lasers, water flowing, cutting vines.

Musical Cues: It has been a while since I last saw Alistair Lock's name on a Big Finish release. He was always one of my favourite musicians and he made a massive splash for himself during the early main range adventures, providing atmospheric soundtracks that would have been worthy of big screen adventures of Doctor Who (seriously, check out some of those Music from Big Finish CDs). His music never sounded synthesized but as though he had an entire orchestra of instruments at his disposal and he is the perfect person to bring in to imitate the achingly moody style of Geoffrey Burgeon. It might be damning this story with faint praise but the music was by my favourite thing about it.

Isn't it Odd: This is the second release in as many months that has had the opportunity to say something profound (or potentially inflammatory) about hunting and has simply been content with bringing the subject up and then using it as an excuse for a run-around. Like Destroy the Infinite there is absolutely no concession made to the fact the people on this planet are humans. What a shame since this is set on an alien world and Briggs has missed the opportunity to introduce us to a new species on a Zygon hunt. Briggs missed another trick and something I have long wanted to see happen in a Doctor Who story. He should have had the Doctor and Leela already on the planet when we first meet them so the first cliff-hanger could reveal that they have been Zygon duplicates all along. Nev Fountain managed to pull off a variation of this idea in Omega (still one of the best Big Finish cliff-hangers ever) but this scenario and setting was absolutely ripe for it. What a clumsy way to reveal all that information about Knight Commander Elunas...by having him assume that the Doctor and Leela already know his story and spilling out every vital piece of information about his career in a fit of pique! I honestly don't know who any of these characters are. They are walking blank slates. How can we engage with the story if we can't empathise with the characters? They are just canon fodder for the Zygons. Not even the Doctor and Leela are elucidated in this tale...if I was new to Doctor Who I would be none the wiser as to who this bizarre pair are after listening. I'm a bit miffed that this story doesn't even reach an hour in length. The extra features are a fair old size but the content of the actual story you are buying doesn't even stretch to 60 minutes and given it is variable quality material at best that is something of an oversight. Plus it seems a little falsely advertised that the titular monsters only show up almost halfway through this condensed tale. Perhaps the compressed running time is a blessing in disguise. The Zygons are trying to terraform the Earth again, how hugely original. I thought given the fact that this was set on an alien world and with the title 'Zygon Hunt' we might be in for something else but an exact duplicate of the plot of Terror of the Zygons. Kisses to the past are one thing...but this is insane. Even the Skarasen makes a last minute appearance.

Result: What is the point of a story like Zygon Hunt? It barely holds the interest over its length and has nothing to say about its subject matter, its returning monsters or its regulars. It's under an hours worth of dashing about and sound effects that make me nostalgic for the story that inspired this one rather than wanting to listen to this one. Nick Briggs is capable of so much better than this and his recent efforts in the 4DA range truly feel as though they are bypassing everything that is good about him as a writer (of which, contrary to some peoples opinions, there are a great many things including an ability to tell an epic story with lots of clever details, stirring melodrama and twists that make you genuinely gasp). The first episode is almost entirely without substance...there is plenty of interaction and running around but nobody seems to be talking about anything tangible, we don't seem to get to know anybody in any great depth, the monsters aren't explored at all because they haven't appeared yet. It's half an hour of empty incident. Briggs was openly critical of The Zygon Who Fell to Earth in one of the issues of Vortex, stating that it was not the sort of story that he enjoys. If the paucity of content in Zygon Hunt is his reaction to such a tale I would have to admit that I'm sitting squarely in Paul Magrs' corner. The 8DA tale had strong characters, real drama, comedy and an achingly poignant finale. Zygon Hunt is just sort of there doing exactly what you would imagine of this kind of story doing and holding no surprises. The third season of 4DAs has been a real mixed bunch, some genuinely strong tales (The King of Sontar, War of the Colophon, The Abandoned) and some mundane ones (The Evil One, Destroy the Infinite, Zygon Hunt). I want to see Briggs produce his very own Creatures of Beauty and Lucie Miller/To The Death for the 4DA range. Hop to it. A beautiful Alistair Lock score aside (and even that is inspired by Terror of the Zygons and The Seeds of Doom rather than creating anything original), this was devoid of interest. Even my reviews of these stories are starting to sound like a broken record: 3/10
Posted by Doc Oho at 00:51

I'm looking forward to your review of the new Fifth Doctor Box set (if you buy it), I know Season 19 TARDIS crew isn't among your fav, but both stories are really really good

You're spot on with this review. There is not much to this adventure at all. However, the actors a mange to give the story a lift and provide some enjoyment for the humble listener such as myself.

Need To Boost Your ClickBank Traffic And Commissions?