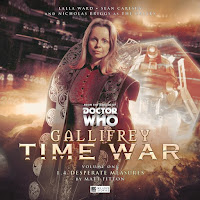 What’s it about: The Dalek Emperor attacks a vital Time Lord outpost. Victory would be a devastating blow to Gallifrey. Romana is caught in the machinations of a President who sees control slipping away. Is it time to bargain with the War Council, or perhaps to parlay with even more dangerous parties? The Time War has barely begun, and for Gallifrey, desperate times are already here...

President Romana: Whilst she objects to the idea at first it does make sense that a woman who has seen Gallifrey through so much strife in the past should put herself forward to lead the Time Lords through the Time War. However, in order to do so she would have to give up her current incarnation, sacrifice the Romana we know and love and force regenerate to take the position. The more I think about it the more this is the most original, powerful and shocking way I can imagine to lose the Lalla Ward incarnation of the character, the definitive Romana in my eyes. She believes they should be seeking allies from beyond Gallifrey to help win the fight. Praxiteles gone, the Doctor’s gone…even Romana’s alien helpers seem to have abandoned her. She was a Dalek prisoner for years on Etra Prime, she has greater exposure to Dalek cruelty than anybody else on Gallifrey.

Narvin: He’s very good, Livia can see why Romana keeps him on. Narvin brings a politically underhanded approach to his work that served the ex-President well during her term. Narvin made attempts to stop the Time War by scouting through Gallifrey’s past and future and bending the laws of time. A Co-ordinator in Extremis. The War Council attempt to take Narvin out of the game because he plays it so well and could potentially help Romana to win the election. There’s a terribly sweet moment when Narvin promises not to let Romana down and she assures him that he never does.

Born Again Brax: He admits he has tried to keep Gallifrey safe but has failed and now the only alternatives are to stay and fight or to run.

Standout Performance: It was a wonderful touch for Nicholas Briggs to turn up playing a newscaster that sound very much like Runcible from The Deadly Assassin. Maybe they were a family of cowardly newscasters. It just goes to prove the more things change, the more they stay the same.

Sparkling Dialogue: ‘I hope we can secure our own communications. Close the door, Narvin.’
‘The Time War has always been our destiny.’

Great Ideas: The Dalek Emperor is baiting Romana in the first scene, telling her that Gallifrey is going to lose. The War Council is no longer attending CIA briefings or following recommendations, they are a law unto themselves. The good work that Livia has done in her second term has been compromised by a conflict that nobody seems prepared for. She never intended to become a wartime President. Among the raft of alterations that the War Council have been forcing through are temporal taxation laws, bolstering the War Chest. Should the Daleks get hold of the resurrection technology they will continue the work of the Time Lords, but turn those Time lords into Daleks. The more Time Lords they kill, the more they will swell their own ranks. They’ll be unstoppable. The latest Nano weapon from the CIA Arsenal was very effective when deployed against the Daleks; splitting them like desert fruit and poising space time itself. The would-be dictators that are mentioned from Time Lord history are Morbius (pre-classic series), Borusa (during the classic series) and Padrac (exclusive to Big Finish). You can feel the weight of Gallifrey history during this sequence and how it all seems to be culminating. I like how dirty the campaign gets in it’s closing stages with Romana’s ‘little chats’ with the Dalek Emperor being exposed to all on Gallifrey before the people cast their votes.

Standout Scene: ‘We’ve raged this War for just a few relative months but already we’ve seen centuries of conflict and millions upon millions dead. And that’s all it will ever be. Attrition on both sides until no-one is left…’ The conversations between Romana and the Dalek Emperor are some of the best scenes in the entire box set. It would be considered treason, what she is doing but she is simply doing whatever she can to try and prevent a conflict that will clearly wipe out both sides. If Romana (always the intellect) can see that so unhindered by the possibility that the Gallifreyans might win out…then why can’t the rest of her people? She’s trying the Star Trek approach of attempt to broker a peace with the enemy to prevent the deaths of countless lives on both sides. She spells it out very clearly to the Emperor that if he wants his people to survive then they need to halt their attacks and return things to how they were. They can control their own destiny rather than letting time decide it for them. A beautiful moment for Romana, one of her finest, as it sees her at her intelligent and persuasive best.

Result: ‘The Matrix has been warning us for years!’ Matt Fitton skips over from the eighth Doctor Time War set to the Gallifrey one and things start to get a little muddied and less focused and we’re back in the territory of Daleks screaming their heads off in war chants. A co-incidence? I’m being unfair because this is vastly superior to anything that he wrote for the other Time War box set mostly down to the fascinating politics that play out, the bold moves that Romana makes and how Narvin is so well utilised. As this story plays out it is with an ominous inevitability that Gallifrey is on its path to its own destruction and despite Romana trying to push against that, the tide of opinion is against her. The election ends with a puppet President and the War Council in charge of Gallifrey and lacking the power to intercede, Romana will have to watch her people fall off a cliff into perpetual conflict. Her insane rant against the administration to try and get them to listen is simply awesome, one of several definitive Romana moments in this climactic instalment which offers stunning material for Lalla Ward to deliver. Big decisions have to be made for our regular characters when the fighting breaks out and they can either run or fight. The pacing of this story is odd with plenty of talking in the first half but a furious sprint to the finale and things get more and more desperate but the circumstances were all so gripping it didn’t really matter about the slow build up. This segues so perfectly into the new series it’s like a jigsaw puzzle coming together, serving as a true prequel to the Time War as depicted in The End of Time. The final twist, which you might have seen coming from the first moment the resurrection procedure was mentioned but is still a glorious moment regardless, sees the final piece fall into place. I wonder if the Gallifrey series has truly come to a climax now because there doesn’t seem to be anything else for them to say about the Time War that wouldn’t contradict what happened on screen. It’s almost too perfect an ending. This set has been a triumph for Big Finish and the pinnacle of their New Series tie-in material so far, refusing to water down the Time War and blending it with a range that has its own continuity that it can bring to the table. More importantly this is simply four beautifully told pieces of drama, impeccably performed and with too many memorable moments to recount. A character driven thrill ride that has confounded my expectations. Bravo: 8/10
Posted by Doc Oho at 01:29