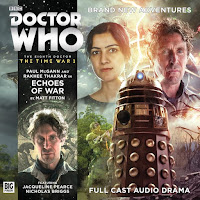 What’s it about: Colliding with the full force of the Time War, the Doctor crash-lands on a jungle world with a ragtag band of refugees. To stay alive, they must cross a landscape where time itself is corrupted. A forest which cycles through growth and decay, where sounds of battle are never far away, and where strange creatures lurk all around. Luckily, the Doctor has friends: not only plucky scientist Bliss, but another, much more unlikely ally. Its name is ‘Dal’…

Physician, Heal Thyself: The Doctor states that his condition of forgetting where the TARDIS is is a little more complicated than amnesia…and thank God because we had enough of that malarkey in the BBC Books. He’s trapped in a War that has no respect for details, facing an opponent he has been tangling with all his lives, has no way back to the TARDIS and is taking responsibility for a group of desperate refugees in a dangerous environment. For the Doctor, this is called a Wednesday and will surely bring the best out in him. He’s a Time Lord but he’s not part of their fight.

Blissful: First Flip, now Bliss. Would it be possible to have companion named Louise or something? I jest, it’s a memorable name for a pretty unmemorable character at this stage. If Bliss is to be the Doctor’s new companion (and there’s no real indication of it at this point) then her only real qualification seems to be ‘because she’s here.’ She was at the Lunar University, a post grad in applied astro-tech, which makes her sound like the modern-day Nyssa (I wonder if she knows anything about telebiogenesis?) but with combat experience because of the Time War. This is a good academic experience for her because it is about as hands on as quantum tech gets. Like Clara in Nightmare in Silver, she is accidentally put in charge of a group of people when it is complete outside of her skillset. Rather than having any tactical competence, she seems to make it up as she goes along. She was on the Theseus because some brink spark thought it would be interesting to measure quantum fluctuations in a temporal warzone.

Standout Performance: Nick Briggs gives a terrific performance as the damaged Dalek. He always does his best work when he gets to play a Dalek that is completely different to the norm; the eponymous Dalek from Rob Shearman’s gripping re-introduction to the creatures in series one, Dalek Sec after going doolally in the time vortex, the Dalek Time Controller from Briggs’ own Lucie Miller and To the Death. This Dalek has completely lost its memory and is a unique individual rather than just another drone and Briggs works overtime to give it a little personality.

Sparkling Dialogue: ‘Every step could be your last before you even take it.’

Great Ideas: Proving this will be a series of heavily linked adventures, this picks up precisely where The Starship of Theseus left off with the refugees stranded on a jungle world with a damaged Dalek in tow. Everything around them is in a constant state of flux. It was a fun idea in the first story but we can’t really have an entire set of stories where from scene to scene all the details are different. Eventually things will have to normalise. No technology will work within this environment, not even the Doctor’s screwdriver. Time is fragmented here, causality’s askew. Battles long past resonate around them; other times and versions of reality are pressing into existence.

Audio Landscape: This is one of those stories that truly relies on its soundscape to tell much of its story and I’m reminded (as I need to be every now and again) that we are dealing with a company at the top of its game when it comes producing vivid and complimentary sounds to construct a story. I think Big Finish’s output is so prolific these days that we simply hear too much audio Who and forget how lucky we are to have it. I particularly liked the sounds of warfare in the distance that faded away to nothing as the environment shifted. This sort of thing must be a sound technicians wet dream. It’s true that the Dalek voices are one of their big selling points (I wonder if Briggs would ever let anybody else voice them for a whole story now?), especially on audio. So, it’s jarring to hear one screaming in pain and behaving like a victim, especially when it is prolonged like this.

Isn’t it Odd: Whilst the idea of a forest growing and dying all around them is an intriguing one and is well realised by the director, I really could have done without all the clunky dialogue that points out exactly what is happening. Big Finish is usually a lot better than this at getting across what is happening visually without having characters state the obvious for the audience’s benefit. If they are trying to help the Dalek forget about its origins and since the inference is that to mention its species will do just that, wouldn’t it be sensible to call it something other than ‘Dal.’ Besides, it just sounds really goofy. Creatures that have been forced down some twisted evolutionary path thanks to the Time War is an interesting concept, but I don’t think it is explored with much interest here beyond an assault of noise as the creature adapts as its timeline shifts.

Standout Scene: The echoes of war weren’t from its history but its future. In comes Ollistra and her War TARDISes and they are about to doom this world in the name of the Time War. The Doctor is appropriately furious, but it does mean that everything we have experienced on this planet is just a prelude of a conflict that is to come. Which means all the interesting stuff that is going to happen here, will happen off screen and at another time.

Result: Echoes of War plays out like standard war story with some temporal jiggery-pokery going on in the background. It’s less immediately gripping than the first story because it takes pains to explain what is happening as it goes and thus loses a lot of it’s mystery, plus some overly descriptive dialogue can really kill some of the more memorable scenes. However, it’s one of those adventures that offers up a unique Dalek character, brilliantly portrayed by Nick Briggs, who has completely lost his memory but is always on the verge of discovering that he was a ruthless killing machine again. He’s really interesting and I wish we had spent more time getting to know him rather than going on a protracted chase scene with him, this might have been a good chance to delve into the Daleks psychologically, especially with one so exposed like this. Instead the story focuses more on his combat tactics, which felt like a missed opportunity. There’s plenty of dangers and running and screaming, but this is one of those Time War stories that I question if it needed to be told. Yes, we know a lot of innocent people were wiped out in the universe spanning conflict but unless you are going to make those characters extremely vivid or have some lasting effect on the Doctor this is just another action epic that would be summed up in a throwaway line in a Russell T. Davies script. If you’re looking for a gripping Dalek live action adventure I would opt for Enemy of the Daleks or Masters of War over this because they have a greater sense of immediacy and better character drama, but this is a perfectly serviceable piece which thanks to some punchy direction remains dynamic, but it’s never intellectually challenging. It’s ‘Dal’ (I wish they had chosen a better name) that makes this worth listening to. Bliss makes little impact, but Dal would have been a brilliant companion: 6/10
Posted by Doc Oho at 02:26