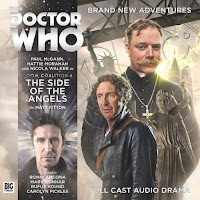 What’s it about: Cardinal Ollistra has plans for New York, plans which involve the Deputy Mayor and her sponsor, one ‘Reverend Mortimer’ – better known to the Doctor as the Meddling Monk. The Eleven arrives to stamp out the resistance, but that isn't the only danger the Doctor finds lurking in the shadows – for New York is a city of Weeping Angels.

Physician, Heal Thyself: Being angry brings the out the best in McGann because I think deep down he's a grumpy sort of fella (it’s certainly the impression I get from the CD extras) and it gives him the chance to rail at the universe in a creative way. How exquisite was his work the last time he met the Monk, a time when I thought the Doctor could toss away any moral virtue he might have and commit murder, such was the extent of his fury towards the man. It was the day the Doctor lost his best friend and his grandson so you can understand why he carries a grudge towards the Monk, especially when he was instrumental in the Dalek’s scheme that brought about such apocalyptic events. Fitton is trapped between a rock and a hard place; since this takes place in the same timeline the Doctor has to acknowledge his loathsome feeling for the Monk but because (for no explicable reason) there is no desire to reveal which incarnation of the Monk this is it remains utterly ambiguous as to whether he remembers those events like the Doctor. It means we have scenes that play out like a one-sided argument, which is emotionally unsatisfying. ‘perhaps I do or perhaps I don’t’ says the Monk, with annoying vagueness.

Liv Chenka & Helen Sinclair: We may as well take them as a whole because they are inseparable now and both suffer the indignity of being shunting off to the side-lines whilst all the big hitting elements of this story take dominance. The trouble was they were practically written out of the last story too so after a strong show in Ship in a Bottle they have become bit players rather than companions. I would really like a number of simple stories where they simply get to serve as the Doctor’s companions rather than getting caught up in a maelstrom of plot elements and being forced to keep up. The few stories that have given them strong focus (The Red Lady, Absent Friends, Ship in a Bottle) have really shown them to be exceptional characters. A shame to lose sight of that for the sake of the arc.

Standout Performance: How like The Meddling to turn up at the end of one of the eighth Doctor’s sprawling epics (just as he did during the end of his time with Lucie Miller) to get involved and make things worse. It’s becoming a recurring theme that he turns up in the Doctor’s life at precisely the wrong time. I was extremely keen on Graeme Garden’s charming and witty turn as the interfering Time Lord, he delivered a comic villain who could really turn off the buffoonery when the situation called for it (and boy was Lucie Miller and To the Death some serious work). Rufus Hound picks up the mantle in The Side of Angels and runs with it, offering an even more jovial and hearty interpretation. This incarnation of the Monk is so rambunctious and attractive that he has managed to wrap the whole of New York around his little finger in the aid of another devious and over complicated scheme. Also, are they still peddling out Beth Chalmers every time there is an extraneous character to play? I’m sure there are actors out there that would love the chance to play even a small part on audio to get a credit to their name but they are never going to get the opportunity to do so when Chalmers is constantly employed in a multitude of guises. If you had to list every story she has ever been in, you’d practically be listing Big Finish’s entire repertoire. The most galling thing is that she played a companion, so that’s an extremely recognisable voice in the mix. You might find yourself wondering as this story plays out ‘what the hell is Raine Creevy doing in this?’

Sparkling Dialogue: ‘Did the Doctor go to school with anyone who didn’t turn out to be a Time Lord super criminal?’

Great Ideas: This story opens with the very dramatic scene of Volstrom being shot over and over again, forcing one regeneration after another. It’s not quite as personal to us as it was in the Unbound adventure Full Fathom Five where it was a take on the Doctor that was being stripped of his lives but it still packs quite a punch. Any story that opens on a terminal scream gets my attention. Plus more male to female regenerations, more pre-empting of the Thirteenth Doctor. The Monk and Ollistra are building dozens of skyscrapers in one of the world’s busiest cities, building a replica of the Citadel on Gallifrey on Earth. It’s a second base away from Gallifrey, which is now in Padrac’s power, where they can build a forward base to stop him. I really enjoyed how there was just no time to bother with the whole ‘the Monk’s in disguise’ malarkey and the story is upfront about his identity. Gallifrey asked him for help and he was only too happy to answer their call.

Isn’t it Odd: How nice to see Big Finish exploring their existing characters in more depth, but would anybody who had not listened to the War Doctor sets know who Ollistra is? The appearance of a certain actress at the end of this story ties this set to the War Doctor arc one in a way that encourages people to head over and grab those three sets but I’m not sure why it had to happen here, where it has no real relevance on the story. This isn’t a case of too many cooks spoil the broth as there are only two writers in this set but more the case of too many elements muddying the broth and pulling the attention in too many directions. River dived into the story and had an impact and ducked out before the finale and so now has Ollistra. Are they just diversions before the endgame hits?

Result: ‘The Angels were already here. We’ve just offered them a chance to join forces…’ Whilst you could say that it is constantly innovating, I’m not sure about introducing so many new elements to the Doom Coalition narrative so close to it’s climax. And can you really claim innovation when those elements are The Monk, Cardinal Ollistra and the Weeping Angels, all three of which could be seen as fan service. The story shows how mired and explanation driven a story becomes when you have too many unwieldy elements in play, so grabbing another handful of toys from the box only serves to complicate things further. And what a complicated piece of the puzzle this is. Whilst there are some solid ideas here, I don’t think Matt Fitton ever got a true handle on them or how to dramaticise them in a clear-cut manner. I don’t think the details matter too much, it boils down to Ollistra, the Monk and the Angels in cahoots to create a safe power base on Earth. Which is an odd diversion from the main action and shows the Time Lords to be a bunch of hideaway scaredy cats who plan to deal with Padrac later. That’s all very well, but I’d like to deal with it now. It takes the skill of an imaginative writer to convince of the Angels threat on audio given they are a threat that very much works in the visual sense and unfortunately Fitton plays on their established menace in the TV series rather than choosing to take an angle that might them frighten the life out of an audio audience. It’s not impossible, Jonathan Morris managed it with some aplomb in his novel featuring them but given they are the titular feature of The Side of Angels all you can hope for here are scenes featuring the nasties being accompanied by a dramatic string quartet going apoplectic when they are on the attack. Hound’s the Monk is great fun but given it’s never confirmed where in his timeline we are, Fitton cannot satisfactorily deal with the events that saw Lucie Miller leave the series in such a dramatic fashion way back when. To have the Doctor make peace with the Monk might have given this story an emotional backbone that made all the elements worthwhile. Instead it’s plot plot plot all the way, and as well as juggling all its own elements it also tackles ideas of TV episodes past (The Angels Take Manhattan) and characters from audio stories to come (Ollistra). Lots of ingredients and the cake tastes stodgy, The Side of Angels is the penultimate episode of the Doom Coalition set but it’s starting a brand-new thread whilst failing to deal with all the existing ones. What a pickle for John Dorney to sort out in the finale: 5/10
Posted by Doc Oho at 17:31

Your lament at Ms. Chalmer's ubiquity reminds me of when I listened to The Tangled Skein (BF's adaptation of a Holmes vs. Dracula story.) I was near the end and, hearing a certain character, thought to myself "Aha! I've spotted the Chalmers role!)" Only when I'd finished it did I look at the cast-list and discovered that she'd voiced *all* the ladies; that was merely the one I noticed.