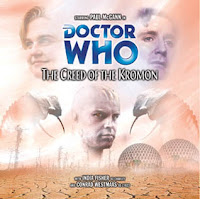 What’s it about: The Interzone is a fearsome nether-world protecting a zone ruled by the Kromon. Theirs is an arid land of dust and dying trees. Across the landscape are spheres that look like giant anthills. The Doctor believes that within one of these structures lie the clues that will lead him to his lost TARDIS. The spheres are ruled by the insect-like Kromon who covet the TARDIS. When Charley is captured she is forced to metamorphosise into a hybrid-insect Queen and so to save her, the Doctor must barter his knowledge of space-travel technology, all the while knowing that he risks opening up all the realms of space to a rapacious race whose creed is not to create, only to plunder.

Breathless Romantic: I don’t understand. Zagreus bred a new offensively self-pitying eighth Doctor and Scherzo nurtured the character to the point where he was practically enjoying frightening Charley and drowning in his own angst. Paul McGann played the character to the hilt, growling and spitting his dialogue with rare fire. So colour me confused when we walk into the Interzone with the Doctor and Charley and suddenly he’s amiable, bouncy, excited to explore a new universe. Did I miss a story in between where he got his sense of adventure back? This beats the previous record for the Doctor unbelievably changing his entire personality between stories (Dragonfire-Remembrance but at least there was a season break) and it strikes me as symptomatic of the ill thought out Divergent universe arc in general. Besides this eye opening change the characterisation of the Doctor is pretty beige with the usual observations made, he’s loyal to his friends, discussing the TARDIS, etc. You would think in a story with as little incident as this one there would be some room for decent characterisation.

Edwardian Adventuress: I hate being so pessimistic about Charley because I think India Fisher is a good actress and plays her well (for the most part) but unfortunately she cannot control the material she is given and her shocking misuse and abuse in this story continues the character degeneration that started in Zagreus. What does she do of consequence that Peri didn’t do better in Vengeance on Varos in a tenth of the time and with far more drama? We learn that she is terrified of insects, she has rebellious tendencies and her potential death on R101 scares her. 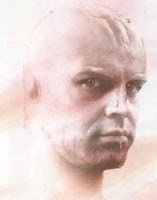 Blinding revelations there. The Doctor says the odd bit of intellect must have rubbed off on her. She is the first prisoner to have ever asked for an execution on Utermesis.

Chameleonic Rogue: I’ll let you read about C’rizz below. Needless to say the only thing I want to say here is that he joins.

Great Ideas (hmm lets not go that far): The planet the Doctor and Charley are on is made up of Interzones and they are protected by the Interzone Guardians, the Kro’ka. They use mind games in order to turn people away. When the Doctor and Charley head into Utermesis he comments that the experiment is underway. The Kromon are giant isoptra, termites! They overcame their oppressors and adopted their strategies, domineering over Utermesis and dividing them into castes, management, food production and research workshops. You are either put to work or turned into fertiliser. Workers half digest the Kromon food before it is delivered to the officers. They are attempting to create a sub species of Kromon. C’rizz is tied to a water wheel and forced to submerge and re-emerge over and over, that’s about as exciting as it gets.

Standout Performance: The regulars are shocking but the supporting artists were pretty good. Stephen Perring clearly relishes playing the Kro’ka and he verges between sinister and playful and the actors playing the Kromon inject some nice humour into their bland, lifeless characters.

Audio Landscape: David Darlington does his usual sterling job with the sound design providing a plethora of realistic sound effects. Insects attack the Doctor and Charley and threaten to eat them alive. The Kro’ka voice is silky and creepy. We once again get to experience the R-101 crashing into flames (I’m starting to wonder if I was actually there in the 1930’s!). The planet is a windswept plain, dusty and pebble strewn. The Doctor and Charley splash about in a stream helping C’rizz to drink. The Oroog sounds like dribbling fat talking! We get to hear C’rizz being sick! The Kromon sucks water from their aqueducts noisily and eat hungrily and belch heartily! Lyda’s dying scream woke me up for a second. Goo bubbles excitedly. The chittering larvae controlled by Charley are quite creepy.

Isn’t it Odd: Phew! Here goes…
· ‘I dun ‘ave no education me guv!’ – is there a script editor…or a director more to the point? This should have been cut.
· The pace is so languid and slothful you may very well slip into a coma before the end of the story. Nothing happens! Literally two and a half episodes past with nothing but dialogue scenes, there is not one iota of action at all. If the dialogue was worth listening to that might not be so bad…
· The oddest thing about this story is how it is presented more as a documentary than a drama. We walk into Utermesis and meet the Kromon and explore their science, politics, food production, religion an economy which is just as dreary as it sounds. Martin tries to make this culture as alien as possible but all of the characters sound like humourless politicians so what little imagination there is is undone.
· All the worst parts of Varos and Mindwarp pop up as though there is no other way Martin can tell a story. So we have dull discussion about how the TARDIS works, pointless chatter between the alien characters (Sil and Kiv) and the companion turned into something grotesque. Varos worked for its biting satire and Mindwarp worked because it was deliciously dark and twisted – Cromon surgically stitches together their weakest elements and adds nothing new to the mix.
· There is more technobabble in this story than a conference attended by Geordie La Forge, Miles O’Brien and B’lanna Torres.

· C’rizz joins. By all accounts Conrad Westmaas is a lovely bloke and a decent actor so why Big Finish should punish him by saddling him with such a dreadful character leaves me in a quandary as to what he could have done to upset them. C’rizz is a charmless, whining, murdering sulker; I cannot imagine anybody wanting to spend time with this guy. Firstly he kills his missus to stop her from becoming the incubator for a new species of Kromon (a dramatic decision to be followed up later, d’you see?) but then he endlessly rants on about having to murder Charley until you would actually turn round and murder him just to shut up. He is so obviously unbalanced and homicidal Charley must be an extremely bad judge of character to get so close to him! Even worse than C’rizz’s murder attempts is how little I cared if he actually did kill Charley. What purpose does her character serve now? She wouldn’t find a reason to be in the series again until she jumps ship and shacks up with Sixie and that’s a long way away.

Result: Possibly the dullest Doctor Who story ever produced with very little in the way of drama, spectacle, imagination or even a narrative. The best scene by a million miles is the first one, which just shows you how exciting this story gets. The Kromon failed to grab me in any way, squeaky voiced politicians giving us no reason to care what happens to them, least of all have to study their tedious culture. The Doctor and Charley are one-dimensional non-entities and McGann and Fisher seem to have given up even trying to care and new boy C’rizz has perhaps the worst companion introduction, failing to be either interesting or sympathetic. A dreary, talky, benumbing experience, The Creed of the Kromon grinds the Divergent Universe arc to a halt and exposes just how moribund this period of the eighth Doctor’s life is: 2/10

Buy it from Big Finish here: http://www.bigfinish.com/53-Doctor-Who-The-Creed-of-the-Kromon
Posted by Doc Oho at 09:07

Strange, we have just about opposite opinions :)

I was so glad the doctor seemed to be back to his cheery self again. And I thoroughly enjoyed this story and thought it was interesting. The last one (Scherzo) just made me sick in my stomach :P

I have to agree with Brandon in this one. It wasn't one of the best Eight Doctor story, but it was definitely better than Zagreus or Scherzo. And I kinda liked C'rizz minus the non stopping rant to kill Charley. But he doesn't really know the Doctor and the way the Doctor always tries to save everybody, so I'll try to excuse him.
But I confess I'm still confuse with how things works in this Divergent Universe and I want to see them back to our place soon.

I didn't have a problem with the Doctor not being an awful person to be around anymore. I was hoping that he'd 'evolved' out of that mood by the end of the last story. But apparently he's evolved back into the guy from Sword of Orion. It's been that long since he and Charley have been so boring. As for C'rizz, I never once thought to myself, "I hope they bring this guy along when they leave," which is the only thing required of a good companion introduction.