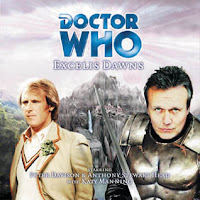 What’s it about: That terrible old reprobate and transdimensional adventuress Iris Wildthyme has gone and locked herself up in a nunnery on the savage world of Artaris. Here she is discovered by the Doctor and the reasonably brutal warlord Grayvorn. Together - with a peculiar nun they pick up en route - they must travel the forests and swamps of this ghastly world in Iris's double decker bus in order to tussle - to the death - with a horde of flesh-eating zombies for a mysterious and holy relic of unfathomable value and questionable pedigree. But what is the Mother Superior's part in all this?

English Gentleman: If you are not a fan of Paul Magrs and his work you have to at least admire his excellent grasp of whichever Doctor he is exploring. He captured McGann’s breathless romantic enthusiasm in The Stones of Venice, the third Doctor’s longing to leave Earth in Verdigris and the sixth Doctor’s post Trial solemnity in the Wormery. With Excelis Dawns Magrs takes a powerful look at what makes the fifth Doctor tick, he addresses some of the complaints fans make about his character and gets us to understand why that should be the case. Whilst I don’t think this is the best fifth Doctor story, for his characterisation it is definitely one of his stronger tales.

He is described as an intriguing pasty-faced wretch. He is a traveller from the far future, transporting a monstrous slug from a far-flung planet (the Gravis so at least we can place this story canonically). He is appalled when he first sees Iris and thinks she will make things a million times worse! Iris claims that he has asked for her hand in marriage at least three times before (!!!). Whenever Iris bumps into him something awful always happens. He prefers not to remember how he first met Iris (although she seems to think its that business with the Zarbis!). She describes the first Doctor as an old bruiser who wouldn’t let you get a word in edgeways. Does he cause more hassle than he solves? He likes to improve things. Iris accuses him of swimming hopelessly in a universe of simplistic moral absolutes; everything has to be good and nice. He is rather stung by those remarks but has to concede some of them. He admits he used to be blithe and devil may care, charging about the place and generally a bit more fun to be around. Now he has found some responsibility for because of him Adric died in a time he should never have walked in. It has made him more circumspect. Before he regenerated he came face to face with a wraith like version of his future self and then he made his previous self in the Death Zone…surrounded by ghosts from the past. Iris asks if she can knock about with him at the climax and he can’t get away from her quick enough but he can’t deny his feelings for her either, secretly hiding a great affection for her.

Transtemporal Adventuress: It’s really very simple. You either get Iris or you don’t and there is very little middle ground in between. If you don’t get her then this story probably isn’t for you as she by far the best thing about it and is treated to all the best lines and scenes. I had already read both The Scarlet Empress and Verdigris so I had a firm idea in my head of exactly how she would sound and behave and Katy Manning slips into the part like a hand into a glove, she’s spot on. She throws herself into the role and turns it up full volume, the only way you can play the mad old crow and so many of her little asides and exclamations had me roaring with laughter! Iris is not afraid of anything, she’s utterly undignified (although she would suggest otherwise), a slave to her vices (she drinks and smokes like an old lush) and the perfect counterpart to Davison’s straight laced fifth Doctor. Long before River Song cam on the scene we had Iris who has met up with all the different incarnations of the Doctor (imagine Iris and the fourth Doctor…the mind boggles! The could get drunk together!) and periodically turns up to throw her delicious body at him! A reckless dilettante, she’s the aunt I would love to have adventures with.

She is a trans temporal adventuress and cabaret star! Iris speaks of escapades, adventures…and men! She used to have a terrible reputation (hah!) and did what she wanted all of the time. She’s got a lovely red double decker bus, which proudly declares it’s the number 22 to Putney Common. She can’t change her nature (the sisters want her to be subdued and passive…don’t make me laugh!). She wonders if she was drunk or possessed when she begged to live with the sisterhood! When she admits she is dying to get out of her habit you have to wonder if she is talking about the clothes or the restricted lifestyle. The last person the Doctor expected to find in a nunnery! Iris is the only person I can imagine who when given a vitally important quest to embark simply has to squeeze in some shopping first! Jenny was one of her assistants, a traffic warden who got the runs every time they went through the vortex (I nearly choked on that). She likes to wear boots, a woolly and leopard skin coat! She is brave and resourceful and stares death in the face with her usual charm (i.e. shouting at it). She tells some remarkable fibs too, that she was with the Doctor when the Sontarans invaded Gallifrey, when Omega escaped his universe of anti matter and when the Time Lords sent him back to avert the creation of the Daleks. The Doctor calls her a deeply deluded and dangerous woman (maybe true Doc, but she’s more fun to be around than you!). Hilariously she has a bazooka in the luggage rack! Iris once found herself and her other selves in the Death Zone on Gallifrey, time scooped by Morbius and forced to pit their wits against Mechanoids, Voords and Zarbis! 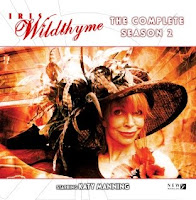 Luckily it was a doddle but it was all the rubbish monsters! I loved her guilty reaction to accidentally changing the destiny of an entire planet by leaving a powerful artefact lying around on a primitive planet. She guiltily suggests she has also visited Frontios – she probably bopped the Gravis on his out-of-place nose! I love Iris. This is probably what Bernice Summerfield will become in her elder years!

Great Ideas: Excelis Dawns is a character tale first and its plot is loose at best and beyond introducing a few elements it really doesn’t stand up as a story as such. The Relic, a gold lame handbag can give you mastery over the afterlife and Lord Grayvorn tumbles into it with the Mother Superior at the climax. Beyond the zombies that is the only real ideas being bandied about which is a little odd for a Magrs tale.

Sparkling Dialogue: ‘Who is this dreadful woman?’
‘You only brought me round here to get your hands on me map!’
‘It’s less bother travelling with Tegan and Turlough than you two!’ – AS IF!
‘You brought him to the bus with Nyssa and…ooh that shrill Australian person!’

Audio Landscape: Production wise this is a strong story with some lovely atmospherics. I really liked the whale song that introduces you to the story but I still don’t have a clue what it signifies. The nunnery is a place of peace, with happy birdsong and church bells ringing. Travelling the mountain envelopes you in a treacherous wind. There is some real huggermugger in the market place. Iris’ bus grows with life and the breaks scream as much as I imagined, it’s been around the block a few times you know! A fireside scene feels lovely and cosy with crackling, spitting flames and screeches of creatures in the wilderness. The zombie’s groan and cry out…I don’t think they are very happy to be alive! Waves gently lap at the bus as the Doctor wades through them. Nighttime insects purr in the background. The screaming sands of the future desert of Excelis.

Musical Cues: Its not the most memorable of scores but Darlington does give it a nice quest feel, helped by the narration.

Isn’t that Odd: Anthony Stewart Head is a fine actor and yet he chooses to play Grayvorn in a stilted, wooden fashion that makes him hard to warm to or even believe in. He insists on spitting his lines out, growling like a thug. I realise he is supposed to be a warlord but there’s nothing to say he couldn’t have a little depth to him as well.

The Excelis plot is nonsense and doesn’t really get off the ground here. We land on the planet, head off on a quest and then discover the Relic at the first stop! Whilst it is a blessed relief that this story is only 100 minutes long after Zagreus (I realise this slots in a lot earlier in the run but that’s where I listened to it) but I wonder if this couldn’t have been fleshed out with a few more fabulous Magrsian locations. Since Grayvorn and the Mother Superior both come across as cipher in this story (and far less interesting than the dynamics between the Doctor and Iris) I didn’t really care what happened to them at the end.

There is more than a touch of The Scarlet Empress to this story but I have to say the novel is much better. Magrs has the time to really make the setting come alive in the book, lavishing us with delicious sights, sounds and smells – the joy of it was it didn’t really have much of a plot but dazzled you with its location, its ideas and its prose. Dialogue alone doesn’t make quite as sensual an experience. Some of the gags were copy and pasted directed from the book, but they’re great gags and well worth hearing Katy Manning bring to life.

Standout Moment: Its quite a quiet story overall and the quietest moment comes when the Doctor and Iris discuss the death of Adric. It’s surprisingly poignant and rather lovely.

Result: A tale of two halves with the emphasis in the wrong place. The Excelis plot is less than thrilling with a rushed quest story and some vague hints of plot elements that could be picked up in later stories but nothing tangibly interesting enough to make me want to head further into this quadrilogy. And yet everything with Iris is wonderful, as you would expect from her creator. Whilst the main storyline was losing my interest practically every word that came out Iris’ potty mouth made me heave with laughter. Peter Davison and Katy Manning have surprisingly good chemistry and it would good to hear more from this combination. To be honest Excelis Dawns leaves a bit of blank on me, I would recommend for a good ride on the bus but not for any intellectual worth. A curiosity: 5/10

Buy it from Big Finish here: http://www.bigfinish.com/1-Doctor-Who-Excelis-Dawns
Posted by Doc Oho at 09:08