They sit in silence. Doc Oho (the real name of the reviewer has been hidden behind this pseudonym to protect his identity now he has been mind wiped and integrated back into society) twitches nervously.
‘I have read your comments’ says the creator.
‘It’s just an opinion!’
‘A what?’
‘I-I’m sorry.’
‘Opinions are forbidden. They are deleted from the public forum to ensure happiness.’
‘I know! I just – what’s wrong with having your say? We are the consumers. We are entitled to judge.’
‘You have no rights, no freedom, no reason to question our broadcasts. You are nobody. Happiness through acceptance.’
‘Acceptance through productivity, I know the creed!’
‘And yet you deliberately flout it! Your anti Divergent Universe dogma has been followed for some time, your voice has been heard, spreading like an infection throughout the electronic world.’
‘It was supposed to be for fun!’
‘Well then, lets have some fun…’

(Please they’re coming for me! They’re coming for you next! Make sure this review gets out there – let people read it and form their own opinions. Don’t let them prevent your opinion from spreading!)

‘You state that [LEAD ACTORS NAME CENSORED TO PROTECT HIS INTEGRITY] and [SUPPORTING ACTOR AND ACTRESS’ NAMES PROTECTED] have been giving poor performances –‘
‘Don’t put words into my mouth. I think they gave their best performances for ages in this story. What I said was they seemed to relish playing new characters because the characters they usually play have evolved into unlikable ciphers that even they don’t seem to enjoy.’
‘In your opinion.’
‘A spineless murdering priest? A lovesick baby? A Lord of Time castrated, weak willed and selfish! What would you call it?’
‘Innovative. Button pushing. Groundbreaking.’
‘Patience straining! Borderm inducing! But this is all besides the point, the regular performers are all stunning here, dramatic, powerful, unforgettable. This is the best they would be for a long time!’
‘Enough!! So you found [ANNIVERSARY STORY TITLE EXCISED] took the characters and the series in a direction you didn’t enjoy –‘
‘We’ve already covered that story, I thought we were here to talk about [AUTHORS NAME CENSORED] latest output.’
‘I see here you say that the author has created, and I quote, ‘One of the most vivid and terrifying alien worlds the series has presented.’ Explain.’
‘Its all in the details and that is this particular authors greatest strength. He manages to build worlds with ideas, shape cities with concepts, bring alive people with their beliefs. It’s a particularly good example in this story but you see it a lot in his [NONIDENTICAL MEDIA REFERENCE REMOVED TO PRVENT ADVERTISING OF OTHER SOURCES] too. Look at Light City. The Conscience. The Editor. Infotainment. Breakfast cubes. Mind wipes. The Restoration Group. He constructs images effortlessly through the mantras spoken by the people of this Interzone ‘Happiness through acceptance, productivity through happiness. Questions lead to answers lead to knowledge lead to freedom lead to dissatisfaction lead to unhappiness. Words equals thought equals understanding equals empathy. Patterns forming habits, habits predicting behaviour. Its a devilishly clever of bringing the nature of this world into the open.’
‘And this is all down to the [TITLE CHARACTER’S NAME CENSORED] infection of questions?’
‘Yes, as the story unfolds we can see dramatically what effect his visit has had on this newborn society.’
‘I see you questioned why the regulars were seen to behave so out of character when they were already undergoing something of an identity crisis in the more, shall we say, traditional stories.’
‘It’s a good point.’
‘What gives you the right to question that? A hack scribbler deconstructing other peoples work because you don’t have the imagination or the talent to create anything yourself! Reviewing other peoples work because you cannot bear the rejection of producing something that would come under the same scrutiny.’
‘Ironic that you should question reviewing data when we are talking about a story that deals with edited content, the overlapping of truths, the mask of one character slipping to reveal someone else underneath.’
‘Don’t avoid the question.’
‘I’m not. This story presents a Russian Doll civilisation built on controlled ideas, restrained imagination and lies layered with verisimilitude. It presents a planet constructed of fiction. A fiction that is reviewed and criticised for its limited scope and imagination. Don’t criticise me for doing the same thing, asking questions, probing ideas, looking for the truth under layers of deception.’

(Let the dialogue of this story be known for its subversive strength!
‘I do this in the name of love!’
‘There are lost episodes of course. Stories that were commissioned but never made. Or made but misfiled, post broadcast. Sheer incompetence, of course.’
‘Someone, somewhere has had an idea…’
‘You can no long be…’
‘Maybe the writers are getting lazy. Re-using the same ideas. Lazy workers make poor product!’
‘And so the revolution begins…’
‘I will stop the Doctor! And I will kill anyone who tries to stop me!’)

‘So you think it is acceptable to praise the writing of this story and yet doctor the rest of the year with disapproval?’
‘Look at the ideas involved: New programming, specially commissioned works to introduce major changes to the social and psychological structure of the general populace. Adhering to the law of compliance. Making changes, decisions described as giving birth to the future. Choices made from a list supplied. The broadcasts being real memories, stolen and edited and used to control. Thought crimes described as deviant, sick behaviour. A caged truth buried under the lies. A society of stupid people, recorded and analysed, asleep and unthinking. A fugue mind. A social experimentation, a plague of questions. Shaping the infant consciousness of an emergent species. The excellent twist that could only be achieved on audio of disguising how many [PLOT TWIST HIDDEN] the populace have! Can you see this level of invention anywhere else in this unintelligible arc?’
‘Stop there. You only compound your crimes by elaborating on them.’
‘Like the Editor, testing his people in various underhanded ways to get to truth. His willingness to dupe the conscience into believing he is [PLOT TWIST HIDDEN] in order to discover the whereabouts of [NARRATIVE PROTECTED]. By pretending to be a criminal he becomes one.’
‘Your guilt has been established. What I want now are the names of your confederates.’
‘Fat chance.’

(As well as writing this story, Mijeromitmore (anagram – in case these thoughts are discovered – handles the design work as well. It’s exceptional. The creepy spinning top that recurs throughout. The crackling, fading, edited theme tune and the harsh, militaristic alternative on the broadcasts. The Voice of Light City is cheerful, instructive. There are hypnotic brainwashing sequences. The story is edited harshly to prove that our story, as the listening, is being controlled as well. There is a suicidal leap and a splat landing. Jack boots march on the streets. The echoey street ways suggest an Orwellian atmosphere. The creepy page flicking as the Editor erases her mind. The noise drilling in your ear as the Doctor’s arrival is recalled, getting slowly louder. Water flowing. A terrorist explosion. Killing and eating the rat. The surreal ending ‘whywhywhyWHYWHYWHY?’)

‘Can I ask a question?’
‘Of course since you will never remember asking it.’
‘Why are did you come after me for the one story I enjoyed?’
‘Its all or nothing. We know you will try and have your say regardless of the treatment. That you will find a way. We will hunt down every one of your cohorts until the public accepts, enjoys, does not criticise. We know you have been sending out fragments of a review during this interview and at the same time we have been reading your mind. We’ve found a list of names in your memory, hidden behind ridiculous pseudonyms. Styre, Jesse 77, Drew Vogel, Anubis, Dorney, Hare Krishna, and dozens more. Further recruits in your subversive moment. Once we’re finished with you we will be coming for them. Take him away to be processed. Bring the next one in.’

(Welcome to Big Finish Productions. My name is Joe. May I take your order please? What’s that? The Natural History of Fear? What an excellent choice sir, I give that story 10/10)

All events in this report are fictitious and any resemblance to real persons, living or dead, is entirely coincidental.

Buy it from Big Finish. Now. It'll show how things really are: http://www.bigfinish.com/54-Doctor-Who-The-Natural-History-of-Fear 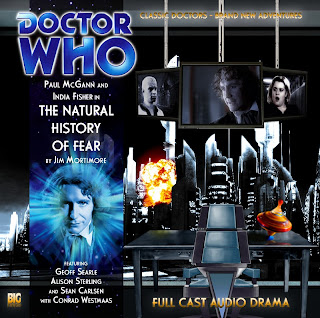 This one was really fun to write!

Yeah, it is fun to do this sort of thing occasionally - I did something similar for Campaign, by the same author. Though I think yours is more thorough (if harder to read).

I would get it but wouldn't I have to listen to the rest of the arc as well?

this was absolutely brilliant doc, you have outdone yourself.

By far the most confusing Doctor who I've ever experienced, completely lacking in closure and so entrenched in unanswered questions (such as "what the heck is going on" most of the time) that is boring, and the end plot twist does not reward the listeners patience. For the first time ever in big finish, I want my money back.

Great review. Well that was quite a listen. I cannot fault the Divergent arc so far with being devoid of ideas, but this is the first time they've come together to make an amazing story. Your comment about the regulars not being this interesting again for a while suggests it might be the last time.

Quite the headfuck of an audio, but damn was it fun trying to work it out. Best of the arc so far...

And as for your review, that was so clever I am positively in awe. Fantastic job on it!