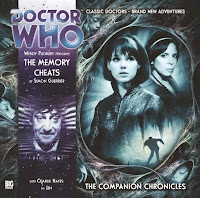 What’s it about: Zoe Heriot remembers everything. But she remembers nothing. A genius with instant recall, Zoe’s mind has been purged of her memories of travelling with the Doctor and Jamie in the TARDIS. And years later she is in deep trouble – prosecuted by the mysterious company that has evidence that she has travelled in Space and Time. Except Zoe knows they’re wrong. Aren’t they? But if that’s the case, why is there proof that Zoe was in Uzbekistan in 1919. Can the memory cheat?

Brains’n’Beauty: Can Simon Guerrier – the champion of the Companion Chronicles – break the curse of poor Zoe stories? Firstly we had Fear of the Daleks that was schlocky pulp that lacked any depth or interest. Then even the otherwise untouchable John Dorney failed to bring to life Echoes of Grey which wanted so badly to be a thought provoking morality play but the theme got lost in too many pointless diversions and a slothenly pace. The Memory Cheats is basically the second part of a trilogy that began with Echoes and I am keeping my fingers crossed that Wendy Padbury finally gets some material that is worthy of her. I love Zoe as a character, she’s one third of one of my favourite TARDIS teams and Padbury is never anything less than enthusiastic and at her best riveting to watch. We learn a great deal about Zoe in this story and get snippets of a childhood that was devoid of love and based purely on functionality. It makes perfect sense that she would want to throw all the responsibility to the wind and run off with the Doctor.

She’s got 36 charges left including sedition, extortion and threats to personnel. Our Zoe? They know that Zoe has travelled in time with the Doctor but she only remembers wanting to and thinking about stowing away on his ship but not having the guts to see it through. She dreams of where they might have gone – being chased through fog by Romans and sitting on the roof of a skyscraper – but they are only dreams. Oddly she has totally recall but also huge gaps in her memory which seems to make her a complete contradiction. When memories start to surface Zoe is furious and wants to know who has done this to her memory, blaming the Company. Telling the story helps to bring back more detail and memory. At points Zoe tries to live up to the character profile the Company have on her of being calculating and sinister but Jen isn’t convinced. She was on the Elite programme and taught how to look after herself. She dreams of adventures with the Doctor because she regrets the decision not to go with him and that has made her fight. She knows the Elite programme has to be stopped and that is why they are trying to silence her.

The adventure that we get to experience sees Zoe back in time and baulking at the inefficiency at everything! Box like cares with no consideration for aerodynamic design! Zoe picks up that the term alien doesn’t mean from outer space but from different countries. Zoe sees the children as wild and uncontrollable especially compared to the regulated childhood she and her friends growing up had and they frighten her. No matter how bad things got Zoe always felt with the Doctor around that they would solve the problems they faced. Zoe thinks of her mother hugging her one last time before her she handed her over to the programme. She thinks she dreamed of monsters even then and wonders if what she witnessed that day planted itself in her head. She’s described as good Russian stock and when one of the men tries to slap her bottom she grabs his arm and twists it behind his back. Our Zoe can be quite the fighter when she wants to be. Its shocking to here what sort of world Chebrakov wants to build – one where there can be no war, where children are brought up to be useful and logical, a state that provided and was constantly vigilant so that there was only minimal crime. It reminds Zoe of the world that she left behind. She chooses to let the creature leave with the children so they could have a life free from superstition and prejudice.

Oh My Giddy Aunt: I love the idea of the pixie like second Doctor stepping into somebody’s home and attempting to uncover the mystery of their missing child. Something about his child like approach to such tragedy makes him seem almost magical. Fox and Yason seem to want to accentuate that effect with their lullaby like music as he investigates. Zoe describes herself trying to wake the Doctor but he only rubs his hands over his face like a sleepy puppy – oh he’s so cute! The Doctor was furious that Zoe could make a decision that would affect so many peoples lives on her own.

Standout Performance: Wendy Padbury’s reading of The Memory Cheats is beautiful, a stunning, dramatic reading. Gorgeous to learn that Charlie is Wendy's daughter - they have great chemistry and I'm really happy to learn there will be a third installment.

Sparkling Dialogue: ‘I didn’t travel in time!’ ‘Your only valuable to the Company if you did…’ ‘Then I’m dead!’
‘I joined up the dots for you and when I got stuck you added more details.’
‘I played you…’

Great Ideas: Zoe is shown evidence that she was present in certain periods of history and she cannot deny the facts but she has absolutely no memory of it. What a great idea it is to bring more history to the second Doctor’s era. As strong as his run was there is a distinct lack of variety in the stories (especially compared to the first Doctor tales) and I enjoy as many spin off excursion into history as possible with Troughton’s Doctor. Uzbekistan, 1919 and there is something hanging in the air like grieving, a force so powerful Zoe felt as though she could touch it. Missing children vanishing from their beds at night whilst their families slept in the same room. There’s a real atmosphere of a community under siege as the creature reveals itself and the people attack with flaming torches. The cliffhanger of Zoe admitting that she killed the Chebrakov’s comes out of nowhere and quite took my breath away. The massive advantage that The Memory Cheats has over Echoes of Grey is that no matter how immersive the central historical storyline is there is plenty time given over to exploring Zoe’s relationship with Jen. Jamie and Zoe are shocked to discover a burnt out town, Elizabeth explains that it was burnt down during the war and that there were far worse sights for hundreds of miles around. Whole towns pummelled to the ground, millions dead and millions more wounded and facing famine and sickness. The alien ship was observing during the war when it was accidentally shot down. Fleshy webbing holds the children to the wall as they dream contented dreams. It had rescued them and wanted to offer them a better life on its own planet. Zoe killed the Lancings by waking the creature, it woke with a start and lashed out immediately thinking that the children it had rescued were in danger. Why are the Company so keen to discredit Zoe? I guess we’ll find out in the third story… Would Zoe really have let the creature take the children away…or should that be did she?

Musical Cues: Awesome, Fox and Yason are back and you know that regardless of the quality of the script that the music is going to be emotional and really suck you into what is happening to the characters. The match of a Guerrier script with Lisa Bowerman directing and Fox and Yason providing the score is usually a recipe for companion chronicles gold. The music that greets the travellers in the restaurant is enchanting.

Standout Scene: Its not really a story with standout moments and more one that envelops you with its unsettling atmosphere and never lets go. On that basis the whole story is standout. However the ending really makes an impact as we learn from her brief glimpses at a journal has made the entire story up from the fragments of information she gleamed – it’s a real Kaiser Soze moment for the young brainbox who has completely outwitted her captors. Then the story subverts even that as Jen starts producing evidence that the story that Zoe has made up really did take place – photos of her, Jamie and the Doctor in Uzbekistan. Who would have thought that the end of The War Games, so gripping at the time, would have had such glorious dramatic consequences?

Result: Simon Guerrier seems to excel at these quietly powerful stories that keep me shivering with anticipation throughout. He’s a prolific writer for this range but he always manages to deliver something unexpected and get under the skin. It might be exploring the psychology of a companion or it might be the location he has chosen to set the adventure and in The Memory Cheats he wins on both counts and with sympathetic direction from Lisa Bowerman and a sensitive musical score the resulting piece is very potent. Wendy Padbury delivers a stunning performance, treating the dialogue with the respect and compassion it deserves and she makes the story unfold with a disquieting, spellbinding effect. As usual a historical setting gives the tale a real sense of realism and Bowerman uses this to create moments of fantastic atmosphere. The ending is so clever it made me want to go back and listen to the whole story all over again to see how Zoe has managed to pull of such a feat. It’s the same sort of giddy thrill I get when a Jonathan Creek episode reveals its secrets and I have to replay the whole thing to see where I have been hoodwinked. A great slice of audio drama and Guerrier has finally broken the curse of unsatisfying Zoe companion chronicles with this gem: 10/10
Posted by Doc Oho at 16:12