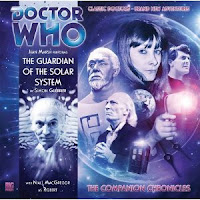 Simon has done such sterling work with regards to the companion chronicles of late I thought it would be a nice idea to get his perspective on them so here are a few background details from the man himself...

Was it a challenge to bring Sara Kingdom back? Where did you begin to flesh out the backstory of a character that only appeared in seven episodes on TV? What were your ambitions with her character arc across Home Truths, The Drowned World and The Guardian of the Solar System? Of the three do you have a favourite?

The hardest bit about bringing Sara Kingdom back was that she'd been killed off. Producer David Richardson explained to me that this would scupper the usual structure of the Companion Chronicles – where a companion recalls a story from their time with the Doctor, while also letting us know what they've been up to since. I said, without really thinking about it, that Sara could tell a story that explained how she was telling the story, and David liked the sound of that. So I lucked in there.

Once I'd been commissioned, I rewatched the existing episodes of The Daleks' Masterplan and listened to the others, and made notes on Sara's character. She's a tough, professional soldier, a stronger version of Avengers girls Cathy Gale and Emma Peel. But we see a different side to her when she reveals to Steven that Bret Vyon – the man she killed – was her brother. So I hung my plays on that. When I was writing the second two plays, I needed to explore her character further. The Doctor challenges everything she's held sacred – the Space Security Service, the Guardian – so I wanted to explore that. She's always been in service to other people, so what does she actually want herself?

I think Guardian of the Solar System is my favourite of the three now – mostly due to the amazing performances and sound production. But I was really nervous about it when I handed it in, since the first two plays had gone down so well.

What is it about the first Doctor’s era that thrills the audience of the companion chronicles so completely? Peter Purves’ interpretation of the Doctor is spot on – how did you as a writer try and capture this era? 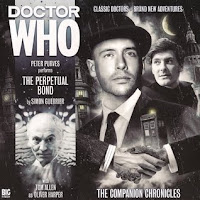 I think one big appeal of the First Doctor's era is that the 'rules' of Doctor Who hadn't been worked out yet, so it maybe took more risks and pulled more surprises. I also think it helps that the Doctor wasn't quite the hero he'd become: he's a strange, slightly devious figure, and the companions aren't always sure about him. That certainly helps in a Companion Chronicle.

To get the period right, I watched the episodes again but also thought about the production team of the time might have produced my story. So The Perpetual Bond is meant to feel like an episode of The Saint or The Avengers, and with The Cold Equations, I was thinking of the close, claustrophobic feel of the first few episodes of The Sensorites.

Did you find it interesting to write for the all male crew of the first Doctor, Steven and Oliver? Did knowing the fate of the character of Oliver from the off change who you would have written for him otherwise? Would you like to write more for him? How did you approach writing for a gay companion from the sixties?

Oliver was all David Richardson's idea, and I don't think it really struck me how different an all-male team was until we were in the studio. Yes, knowing Oliver's fate let me foreground some stuff, like Steven feeling he was on borrowed time. I read up on the Stock Exchange, and David recommended the Dirk Bogarde movie Victim. I based Oliver in Perpetual Bond on a young Bogarde. I also read up on gay rights in the 60s, including testimonies from gay men who were arrested. And I talked to some gay friends about their experiences.

I'd love to work with Tom Allen (who played Oliver) again. He has a small part in my short film, Cleaning Up, and we've met up a few times since. And if I can bring Sara Kingdom back as a house, more adventures with Oliver would be a cinch.

You have also written for Ace, Zara, Liz Shaw and Zoe in the companion chronicles range? Whose voice did you find easiest to capture and whose was the most difficult?

I created Zara, so her voice was probably the hardest to find – I had to invent it. David didn't think my Liz Shaw was quite right, so I rewrote that play while watching Inferno (a lot of my work involves rewatching DVDs). I think the easiest was probably Ace. I'd written for her in The Settling, but she's also got a very distinctive way of speaking.

The Memory Cheats was an extraordinary example of narrative deception. How did you begin to assemble such a story? Will you be writing the third story in the arc? 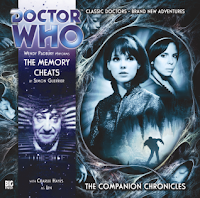 That brief was fun. David sent me the script of John Dorney's excellent Echoes of Grey and asked me what happened next. I wanted to write a Zoe story set in history – something the TV show never did. So I looked through my bookshelves for good historical settings, and found Col Bailey's Mission to Tashkent, which I'd read a few years back. Spy stories often revolve round the reliability of evidence and witnesses, which seemed a good match for Zoe's unreliable memories. I can't tell you what happens next in Zoe's story – but I do know. Wait and see.

How different is it to write a double length companion chronicle and did you find it easier with two narrators rather than one? Will we hear anymore from the team of Steven and & Sara?

I think the hardest thing with The Anachronauts was that I'd already written a trilogy each for the two characters, so needed to find something new to say about them. I got there by listening to the audiobook of The Daleks' Masterplan novelisations, which includes a fair bit about Steven and Sara's relationship. Then the difficult thing was that I lost 7,000 words of the script – getting on for half of it – when my back-up file was corrupted. Rewriting it was really arduous.

Otherwise, I approached the story as two separate but connected stories, so that Disc Two would feel very different. I decided to let each character lead alternate episodes, mostly so I could be sure I was dividing up the story fairly.

I hope there's more from Steven and Sara, but it probably won't be by me. Time for someone else to have a go!
Posted by Doc Oho at 14:14