Why I love Doctor Who... 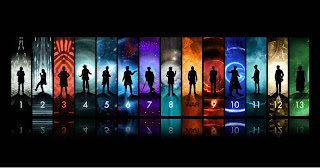 I love Doctor Who. Hardly an original statement but it’s true. There are so many reasons to love the show; the fantastic cast of characters, the vast engine of diverse storytelling, the multitude of locations, the great monsters, the performances, the music…so many reasons. But I think the reason why Doctor Who inches out my other favourites (Star Trek DS9, The West Wing, any number of BBC comedies) is its sheer balls. It’s ability to go one step further than any other show, to take an absurd idea and make it work or to take an absurd idea and make it flop in spectacular style. Doctor Who has more brio, more confidence than any other show on television and here are just a number of reasons why…

Hartnell’s stuff is where it all begins so this is where the ground rules are set and yet this is one of the most diverse and experimental periods in the shows history. Look at the basic ideas driving the series – a police box that travels through time and space – what other show would dare take something so profoundly absurd and make it work this well? The Web Planet pits a race of giant ants against a race of giant moths! The Daleks’ Masterplan is a 12 part epic that mixes alien planets, Earth in the future, Z Cars, a cricket match, a confrontation with Peter Butterworth, lots of Daleks and the death of two companions…there was no end to the ambition! Who else would attempt a studio bound western (The Gunfighters) and make it a hilariously funny singalong comedy? It doesn’t get any less mad with Troughton. Daleks glide through a Victorian house (Evil of the Daleks), Yetis menace the London Underground (The Web of Fear) and the Doctor leaps into a world of fiction, a world of giant toy soldiers, Gulliver and Rapunzel (The Mind Robber). Not only do these three stories pull off these blatantly insane concepts but they produce some stunning drama in the bargain. Go figure.

Who else but Doctor Who would take such a malleable concept and suddenly change the entire direction of their show and exile their main character to one planet? Or spend four episodes indulging in Star Trek style Mirror Mirror fascist duplicates of the regular characters and flesh them out into likable creations and then blow their world up and show their horrific deaths (Inferno?). Making the ultimate evil a representative of God (The Daemons)? Show the destruction of Atlantis just four years after it had already been depicted, somehow making it even more goofy than the first attempt (The Time Monster). Who else would dare to poke fun at themselves so hilariously than Carnival of Monsters with great lines such as ‘They’re great favourites with the children!’ when talking about the monsters. No other show would build an entire story around evacuating London due to a plague of dinosaurs popping into existence and fudge the special effects so spectacularly (Invasion of the Dinosaurs).

Doctor Who indulged in arcs long before it ever became famous to do so, seasons twelve and sixteen sees a 24 and 26 episode epic respectively. The Key to Time season brilliantly flaunts its premise in the first story and spends the next four stories quietly pretending to forget its quest story and wrapping up its contribution in a couple of minutes at the beginning (Androids of Tara) or end (The Stones of Blood) of each story! Who else but Doctor Who would spend three seasons so shamelessly pillaging from the horror genre, telling a pastiche of everything from Frankenstein (The Brain of Morbius) to Day of the Triffids (The Seeds of Doom) with a touch of The Manchurian Candidate (The Deadly Assassin) and Asimov (The Robots of Death) and somehow pulling them off better than the originals! Only Doctor Who would spend two hours setting up the main plot of a story and then have the Sonatarans storming Gallifrey at the end of episode four of The Invasion of Time. Or have an alien being push the creation of the human race on so he can have several Mona Lisa’s painted and make a fortune selling them secretly so he can make time travel equipment and head back in time and save his race and wipe out the human race in the bargain (City of Death)! No other show would have the audacity to write out a team as glorious as the fourth Doctor, Romana and K.9 and replace them with Peter Davison, Adric, Tegan and Nyssa…and increase its audience figures!

Imagine facing the daunting task of having to kill off the most annoying companion of all time…only Doctor Who would have him trapped on a cyber-enhanced spaceship heading towards prehistoric Earth and have him wipe out the dinosaurs (Earthshock)! Imagine attempting to visualise a Concorde landing in prehistoric Earth on the budget of a soap opera (Time-Flight)! Constantly innovating, season 20 introduced a homicidal companion trying to murder the Doctor as soon as his back is turned. What other show would wipe out its entire guest cast in a massacre that makes Reservoir Dogs look coy in comparison (Resurrection of the Daleks). What about the horror moments in season 22, the acid bath scene, Lytton having his hands crushed, the Doctor being pursued by a slavering cannibal through the Seville countryside, Davros having his hand shot off. No other show in such creative and reputable strive would produce Trial of a Timelord, a really bad, confused mess of a story that somehow, somehow manages to be utterly wonderful at the same time.

What other show could schedule something as deliriously embarrassing as Time and the Rani and not lose all of its audience? Who else would proudly display the Kandyman during its biggest audience crisis (The Happiness Patrol)? What other show could pull such a surprising rabbit out of their hat and produce such a wonderful last classic season, full of genuine character development and delicious horror? What about sending Paul McGann to the US get him to snog a woman and wander about looking for a plot for over an hour and somehow not make it suck (The TV Movie)?

Who else could humanise the ultimate villain and win over a whole new audience (Dalek)? Captain Jack Harkness was introduced as the first openly gay character in the show, somehow beating Star Trek to the idea despite that shows liberal consensus (The Empty Child). What about having an entire episode where your regulars only make a cameo (Love and Monsters). Or taking hold of a novel and committing it celluloid (Human Nature) with such passion? Telling a story with the twisted humour and scale of Utopia-Last of the Time Lords. Taking one of Britain’s most famous comedy actresses and getting her to emote heartbreakingly in the destruction of Pompeii. Producing the ultimate fanwank (The Stolen Earth) and making it the most exciting thing to ever hit our screens. Is there another show that could plunge so spectacularly into fairytale drama and indulge in such postmodern timey-wimeyness? Would they rip the soul of the Starship Enterprise, put it inside a foxy babe and tell a heartbreaking love story between her and the lead? I think not!

When the series is riding high with hot young likeable whippersnappers in the role, what other show would tear off in the other direction by casting a much older actor and give him some of the crabbiest characterisation the lead has ever had? Who else but Peter Capaldi could take such limitations and spin gold out of it? How do you bring to life a revived show that has been going for ten seasons and the audience is on the wane? Defy all expectations and cast a woman and dare to cut out all the timeywimeyness that has come to define the show and concentrate on the horrors of humanity. Rosa and Demons of the Punjab are stunning examples of why such an approach was worth taking.

What other show has such a rich and varied number of spin offs of such quality? The Big Finish range manages to produce authentic classic Doctor Who stories without images to an astonishing quality. How about taking the reviled 6th Doctor, teaming him up cuddly academic Evelyn Smythe and making him the most wonderful, colourful, charming Doctor ever. Letting Colin Baker and Bonnie Langford rip the piss out of their characters in the gloriously funny The One Doctor. The range produced The Chimes of Midnight which shows what a well written Paul McGann could have achieved and manages to be perhaps the most perfect Doctor Who story in the bargain. The series performs the quantum leap of having companion Charley Pollard abandoned by the 8th Doctor and rescued by the 6th, a truly naff concept pulled off with real verve and style. Big Finish gave us the Bernice Summerfield range, now in its tenth season with a wealth of fantastic stories to be proud of.

What other show could produce over 300 original novels, transcending the shows entertainment roots and producing something far more adult and wonderful. Timewyrm: Revelation takes us into the Doctor’s mind and shows how truly fucked up he is. Just War devastatingly has companion Bernice Summerfield tortured by the Nazi’s. Alien Bodies dares to kill off the Doctor and have him bury his own future corpse. With The Burning, the 8th Doctor range wiped away all the mistakes of the previous 3 years and transformed his character into something far more interesting, aggressive and hilarious. Adventuress on Henrietta Street tells its story in the style of a historical document. The Crooked World takes place in a world of cartoons and tells an astonishingly poignant coming of age story. The Tomorrow Windows pastiches Douglas Adams and manages to have more laughs per page than any Pratchett novel. Festival of Death tells its story backwards. Combat Rock nestles the 2nd Doctor into a story of blood soaked cannibals and makes him utterly authentic. The Indestructible Man steals from Gerry Anderson whilst telling a gripping war on terror story. And with the comics tell big, bold, epic stories with budgetless imagery and giving the eighth and ninth Doctors a wealth of new stories to enjoy.

And how about the spin offs on the telly? Who would have ever thought hiring Elisabeth Sladen to take on alien monsters with a bunch of pre-pubescents would have been the best thing ever? Who could have foreseen the series producing something as profound and heartbreaking as Whatever Happened to Sarah Jane? What about Torchwood? After Russell T Davies’ mature and gripping Damaged Goods nobody guessed his take on adult Who would flop so spectacularly in its first year. And then in true Doctor Who style who saw it rising from the ashes and producing such a glorious, emotion fuelled epic in Children of the Earth?

What else but Doctor Who could do all of these things?
Posted by Doc Oho at 00:39

as I kinda thought i would, my thought is just "Yup, you nailed it.". All of these things. I would add, for the series as a whole, that it is overwhelmingly positive and champions HELPING. The Doctor is Mr. Rogers and Thomas the Tank Engine and Dora the Explorer and John McClane and Captain Janeway. The Doctor transcends being a person or a Character and has become an ARCHETYPE. The personification of the last-ditch-effort-to-keep-things-from-completely-going-sideways

If you haven’t seen Marco Polo - definitely worth a look. In some ways as good as the Aztecs, even maintained over 7 episodes. Superbly played by Hartnell with brilliant Guest performances by The late Mark Eden and Derren Nesbitt, it’s a genuine series highlight, even if the lack of episodes means it has to be watched in Reconstructed form.